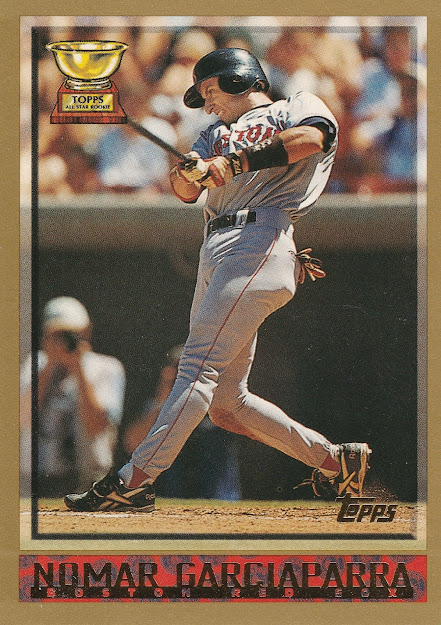 With some players, there's very little mystery. Will they have what it takes to perform at the highest level? Do skills at a young age translate to the big leagues? In the case of Nomar Garciaparra, it was obvious from the beginning that something special was happening. Nomar's rookie season was among the best of all-time. He was a complete player right out of the box. He was the AL leader in hits and triples. He hit .306 with 30 homers and he scored 122 runs. He stole 22 bases, while playing excellent defense at a premium position. He ran away with the Rookie of the Year award, so of course he was the selection at Short Stop for the 1997 Topps All-Star Rookie team. 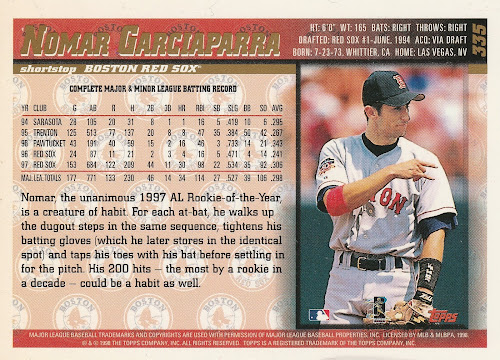 He was an All-Star, won a Silver Slugger award, finished 8th in the MVP vote, and was a unanimous Rookie of the Year for the Red Sox. All of this came after a rough 24 games in 1996 at the big league level. That short stint was all he needed to make the necessary adjustments. He was no stranger to taking a big leap into unfamiliar waters. 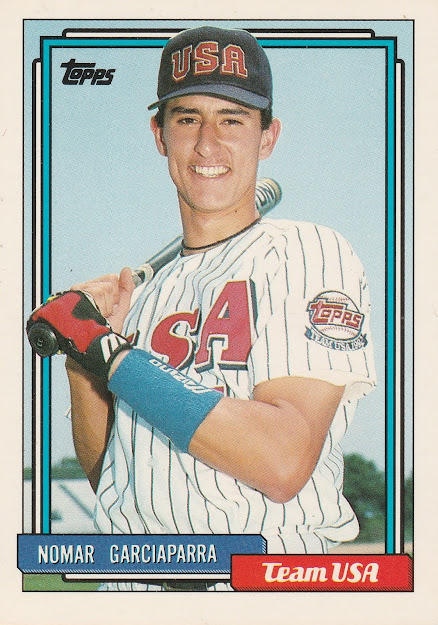 As a college freshman, Nomar was a walk-on with the Team USA Olympic baseball team. He ended up as their starting short stop, and the team finished 4th in the 1992 Summer Games. His college career at Georgia Tech was fairly impressive. He was the 1992 ACC Rookie of the Year, and his 1994 season is one for the ages. He hit .427 with 26 doubles, 11 triples, 16 homers, 73 RBI and 33 stolen bases. Not too shabby.

Nomar was selected 12th overall by the Red Sox in the 1994 MLB June draft. His first taste of pro ball wasn't overly impressive. In 28 games for the Sarasota Sox, he hit a respectable .295 with one homer and 5 stolen bases. The following year his hitting took another step back, with a .267 average at AA Trenton, but he did flash the glove and the wheels, stealing 35 bases. Nomar was being promoted each season, but hadn't really had a breakout performance by 1996. In AAA Pawtucket, everything came together quickly. He torched the ball to the tune of .343/.387/.733 in 43 games. The torrid pace forced the Red Sox to make a move, calling the youngster up to the big leagues in August. 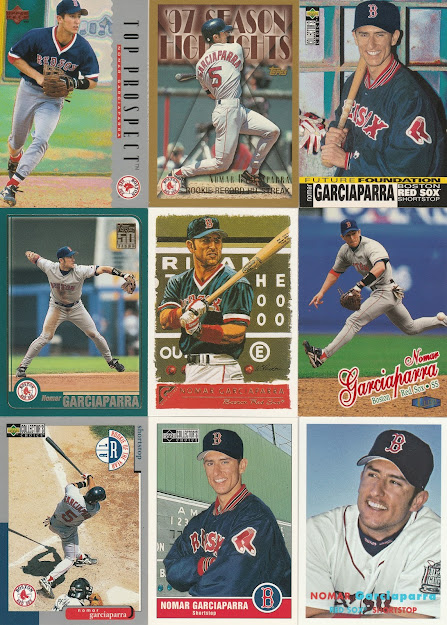 Nomar's rookie season was tremendous, but he wasn't just a one hit wonder. He excelled in his time at Fenway Park, hitting a robust .323/.370/.553 over 9 seasons. His second year, he was the AL MVP runner-up, leading the Red Sox in runs scored and runs batted in. If not for the fact that he was splitting votes with his teammate Mo Vaughn, he might have been the outright winner that season. He followed that campaign up with a pair of batting titles, including an incredible .372 average for the year 2000. He led the AL in intentional walks that season as well. His best season in Beantown is hard to pick - was it his rookie year? His 2 batting title years? 2002, when he led the AL with 52 doubles? 2003 when he had 120 runs scored to go along with 13 triples, 37 doubles, and 28 homers? The Red Sox ran on Nomar for nearly a decade, and his play inspired the team despite not resulting in the ultimate prize of a World Series victory. A wrist injury limited him to just 21 games in 2001, snapping a string of 4 straight top-10 MVP finishes. Injuries would define the end of his Boston tenure, even though they were sandwiched between a pair of productive seasons. 2004 was truncated by an Achilles' heel injury, keeping Nomar out of the lineup until late June. He was hitting .321 for Boston when he was traded as part of a 4 team blockbuster with the Twins, Expos, and Cubs. Boston was after a defensive upgrade, securing the services of Doug Mientkiewicz and Orlando Cabrera, and Nomar found himself heading to Wrigley Field. Nomar would miss out on the Red Sox' World Series win, though his former teammates voted to give him a partial share of the World Series pot and sent him a World Series ring. The fact is that the Red Sox might not have attracted the big name free agents like Pedro, Schilling, and Manny Ramirez without a star like Nomar to build around. Ironically the team's egos were mostly sidelined for the championship run, but Nomar's contract extension dispute was the lone exception. While he didn't play with arrogance, the Red Sox certainly treated him like a malcontent before shipping him out. 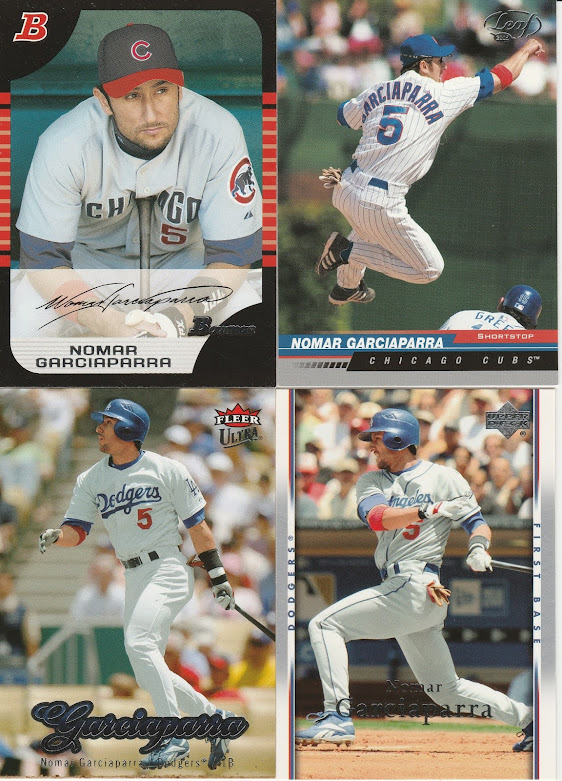 The Cubs were disappointing in his year and a half in Chicago, and so was Nomar. He would play in just 62 games for the Cubs in 2005, missing 3 months due to a groin injury. The injuries that slowed Nomar at the end of his Red Sox career were not the same ones that derailed his Cubs career, but hurt his future earnings all the same. Thankfully for Nomar, the Dodgers had deep pockets, and were more than happy to pay for his services. Things were looking up for Nomar in his first full season in LA, and he was coming home after growing up in Southern California just minutes from Chavez Ravine. He would return to the All-Star game for the final time, and racked up 2.5 WAR, his highest total since his 2003 season. He had a 120 OPS+. which was decent, but still a shadow of his former self. The next year his production slipped and he was moved around the diamond to accommodate other players like James Loney at first base. Injuries towards the end of the year didn't help. 2008 was nearly lost before it began for Nomar, when he suffered a microfracture in his hand. He would return to Short Stop for the first time since 2005, but was now relegated to fill-in and bench duty. He would play in just 55 games as his playing time and production fell off dramatically. 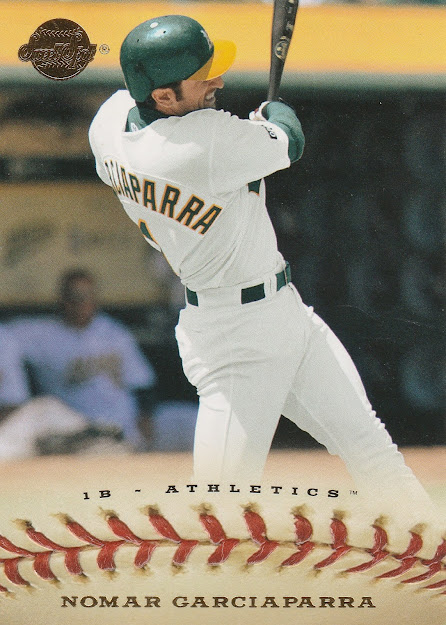 He would play one final season in the big leagues, signing a one year deal with the Oakland A's in 2009. Over 65 games, Garciaparra hit .281 as a DH/first baseman. For his career, he was a .313/.361/.521 hitter. if not for several seasons derailed by injury and the general wear and tear, he might have reached 2,000 career hits. He was even better in the post season over his career, hitting .321/.386/.589 in 32 playoff games. His career was cut short by injuries, but his peak was certainly Hall of Fame worthy. He certainly falls short in counting stats over his career, but when he was at his best, there were few players that could match his skills on the diamond.
Any specific Nomar memories you'd like to share? I'd love to read them in the comments below. Thanks for reading!