In 1981, the Blue Jays had a tough time in the powerhouse AL East. They finished in 7th place in the division, though they had a slightly better 2nd half. The team's record for the season was a forgettable 37-69, and the team's highlight was arguably the game they did not get a single baserunner. Len Barker's perfect game against the Jays in May was one of the more notable days of the year for the Blue Jays. The team also courted controversy when they visited the Angels on a road trip. The Angels' team President was the father of Jays' president Peter Bavasi. Angels' Prez Buzzie Bavasi was not pleased with the play of his team and wanted to fire his manager. Son Peter devised a plan to make history and floated the idea of also firing Jays' skipper Bobby Mattick. Cooler heads prevailed, though a frustrated Mattick would resign at the end of the season, as would Bavasi- forced out by the Jays' top Brass.

1981 was also notable for the Jays when they signed Choi Dong-won from South Korea. The 23 year old pitcher was the first Korean-born player signed by a Major League Baseball team. Choi ultimately was not permitted to leave South Korea to join the Blue Jays, and instead became one of the great players in the early days of the KBO. 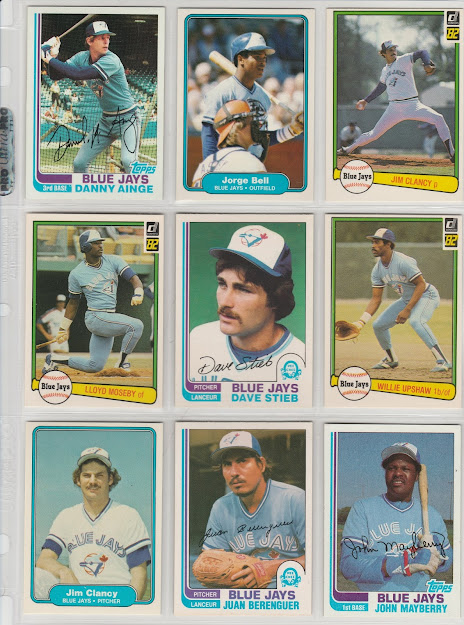 The following season was the first year with Bobby Cox as the team's manager, and things were certainly looking promising for the Jays, in just their 6th year of existence. While they weren't showing it in the standings yet, the team had several talented young players, and seemed to be just a few pieces away from being a playoff contender in the East. They improved to a 78-84 record and moved one step forward, finishing in 6th place. More exciting for fans, 1982 was the year that the Blue Jays began selling beer at the ballpark. Ontario had previously outlawed serving beer at baseball games, and even after lifting the ban, kept certain restrictions and limits in place to discourage patrons from over-indulging. 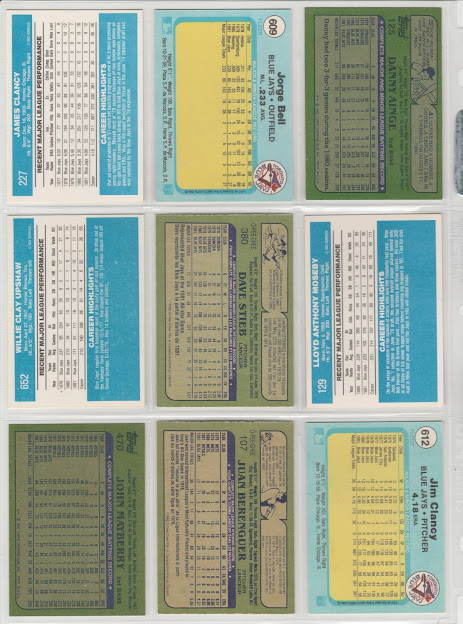 The Cards:
Topps #125 Danny Ainge - If you liked the controversies above about gimmicky firings, free agents prohibited from leaving their home country, and restricted beer sales, you're going to love digging in to the Danny Ainge saga with the Blue Jays. Ainge would be released officially by Toronto on November 27th, 1981, but not without some fireworks. The 6'4" Third Baseman / Shooting Guard had struggled in the big leagues .220/.264/.269 over 211 games. That's not his batting average each season, that average/ on base / slugging for his MLB career to date. A Third baseman slugging .269 is a far cry from typical production, but the Jays still felt strongly that Ainge had potential to be great. So did the Boston Celtics, who drafted Ainge in the 2nd round of the 1981 NBA Draft, despite being fully aware that he was under contract with the Jays. Ainge played college basketball at BYU while he was with the Jays, and was tremendous, averaging over 24 points per game as a Senior, and won the coveted Wooden Award, given to the "most outstanding basketball player of the year." Ainge would take the Jays to Court, so to speak (meaning literally), and was granted his release to start his NBA career.

Fleer #609 Jorge Bell - Bell was the main power bat in the heart of the Jays' lineup for the 2nd half of the 80s. He was originally signed as a free agent by the Phillies, but had already been heavily scouted by the Jays. The team would select Bell in the Rule V draft in 1980 and made him their starting Left Fielder to begin the 1981 Season. He would return for another season in the minors in 1982 (Rule V draftees are required to spend the season on the big league roster), and was a regular fixture in the Jays outfield starting in 1984. He would hit big in the 1985 ALCS (.321), won the 1987 AL MVP when the Jays fell just short of the pennant, and was later named to the Canadian Baseball Hall of Fame. In his rookie year of 1981, Bell hit just .233, but offered some promise for big days to come. Cubs fans went from hating to loving him after a lackluster free agent signing. Bell was the player traded to the White Sox that brought Sammy Sosa to Wrigley.

Donruss #227 Jim Clancy - Clancy was an "original Blue Jay" coming to the team in the 1976 expansion draft from Texas. Clancy was just 21 years old when he made his debut for the Jays in 1977. Clancy was considered a veteran by the time 1981 rolled around, but he was still a relative youngster. 1982 would be one of his best seasons, making the All-Star team and leading the AL with 40 starts. He ranks 3rd on the Blue Jays' all-time wins list.

Donruss #129 Lloyd Moseby - Along with Bell and Jesse Barfield, Lloyd Moseby formed a strong outfield force known as "the Bs." Moseby once stole 2nd base twice on the same play, but didn't get credit for either one. In a game against the White Sox, Moseby took off and swiped second, with the ball trickling into center field. Short Stop Ozzie Guillen had faked out Moseby so well that he started back towards first base, thinking that the play had been ruled dead. He was nearly thrown out at first from CF, but the throw was wild and trickled into the dugout, so 270 feet later, Moseby was at second base with nothing to show for it for him on the stat sheet. Moseby was an All-Star in 1986, and often combined speed and power on the diamond, leading the league in Triples in 1984, and averaging 17 homers and 29 stolen bases a season.

O-Pee-Chee #380 Dave Stieb - Gotta have some OPC for the Canadian teams, and who better to represent Canada than Dave Stieb? Dave was the Blue Jays' Ace in 1981 and 1982, tossing 7 shutouts over the two seasons combined. Stieb became the Jays' All-time Leader in victories, was a 7-time All-Star, and won the AL ERA title in 1985. From 1982 through 1985, Stieb was the WAR leader among pitchers each season. Only Jack Morris won more games in the 1980s than Dave Stieb. He also made a notable comeback at age 40 in 1998, pitching 50 innings for the Jays 5 years after his first retirement.  After a pair of 9th inning near misses, Stieb finally tossed a no-hitter in 1990, the first no-no in Blue Jays history.

Donruss #652 Willie Upshaw - Upshaw was another Rule V draftee by the Jays, coming to Toronto from the New York Yankees' system. Upshaw was with the Jays right away in 1978, but just like Bell, spent the following season in AAA getting more time to develop. By 1982 he was the starting first baseman, and he led the Jays in homers and RBI that year. He had some power, averaging 16 homers a season for his career, but ultimately would find his playing time reduced when new prospects arrived like Cecil Fielder and Fred McGriff. Upshaw's final MLB season came in Cleveland, where he hit 11 more homers and reached 1,000 hit and 500 RBI milestones for his career.

Fleer #612 Jim Clancy - Clancy and Stieb would spend a better part of the 1980s battling for the "ace" status with the Jays. His best season was probably 1980, even though he led the league in walks allowed and had a losing record of 13-16. He had an ERA+ of 103 for the Jays, just above league average, but was the definition a workhorse starting pitcher, 2nd all-time for the Jays with over 2,200 innings pitched. Clancy would close out his career in the bullpen for his old Blue Jays manager Bobby Cox, pitching and earning the win in game 3 of the 1991 World Series.

O-Pee-Chee #107 Juan Berenguer - Señor Smoke was a spot starter for the Blue Jays in 1981, ultimately finishing the season with the AL lead in losses. But Berenguer would find his stride in Detroit in their 1984 championship season, and later became a trusted and vital bullpen option with several teams. He was a World Series champion with the Tigers, the Twins in 1987, and was part of the 1991 and 92 Atlanta Braves pennant winners. It was the Giants in 1986 that converted Berenguer solely to relief duties, and he found that the bullpen was a great place to be. He was also the 1978 International League pitcher of the Year, when he was a starting pitching prospect with the Mets.

Topps #470 John Mayberry - Before Willie Upshaw, the Jays' big bopper was John Mayberry. He was acquired in Spring Training from the Royals in 1978, and right away changed the dynamic of the offense north of the border. Mayberry already had two All-Star Appearances under his belt and had twice led the AL in walks while in KC. With the Jays he averaged 20+ homers and  nearly 70 RBI a season while sporting a 119 OPS+, thanks again to his excellent plate discipline. His career OBP was more than 100 points higher than his career batting average. He still could hit the ball hard - he had 255 career homers.
Posted by Brian at 5:53 PM