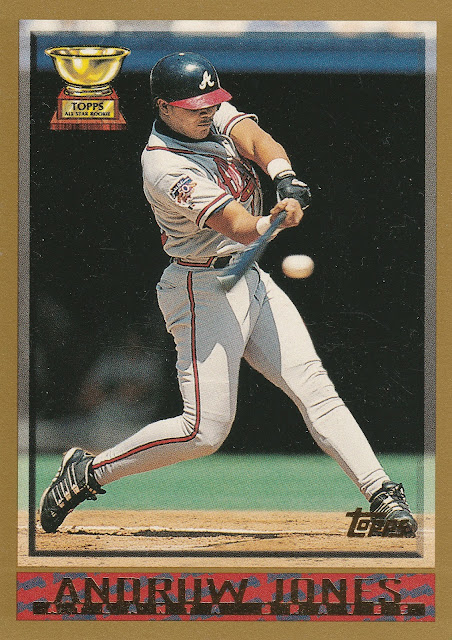 Andruw Jones was a once-in-a-generation talent - power, speed, and defense, Andruw could do it all. Jones was another player who could be pencilled in to the 1997 Topps All-Star Rookie Team before he even took the field that season. His 2 homers in the 1996 World Series at the tender age of 19 announced that he was something special. His rookie year could almost be called a disappointment, though he hit 18 homers and stole 20 bases while playing a stellar center field. 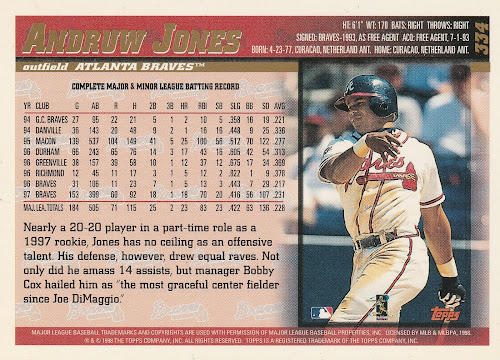 "The most graceful center fielder since Joe DiMaggio." That was Braves' manager Bobby Cox, who played with Mickey Mantle at the tail-end of the hall of famer's career. Cox knew a thing or two about talented center field play. Ultimately, the decline of Jones was a lot like that of Mantle, though it seems like it was for different reasons. In 1997, Jones put together a solid rookie campaign, filling up the stat sheet across the board. 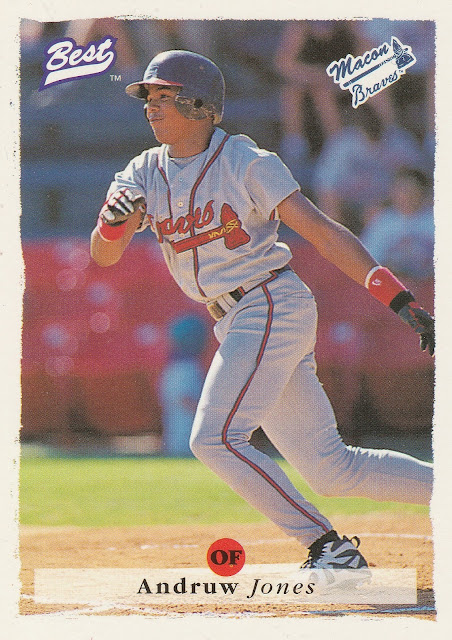 Jones was an international free agent signed by the Braves out of Curacao when he was just 16 years old. While the island was still a bit of a mystery to MLB scouts, Andruw was nearly a household name. He was an international sensation at age 11, playing in a tournament in Japan. At 13, the legend goes, he was launching 400 foot homers and was getting invites to play with adult leagues in Curacao. By 15, he was considered the best baseball player on the island.
His minor league career was equally impressive and showed his precociousness. He dominated at each level, and was the 1995 and 1996 Minor League Player of the Year according to Baseball America. In 1995 he was the MVP of Southern Atlantic League, where he hit 25 homers, drove in 100 runs, stole 56 bases, and of course was a revelation in center field. 1996 was not much different; he hit .339 and scored 115 runs before being called up to the Braves for 31 games at the end of the season. He remained on the post season roster as well, hitting a homer in Game 7 of the NLCS, then two more in the World Series - his first two World Series At bats.. He was the youngest player to homer in the World Series since Mickey Mantle. . .   Jones was ready for super stardom. 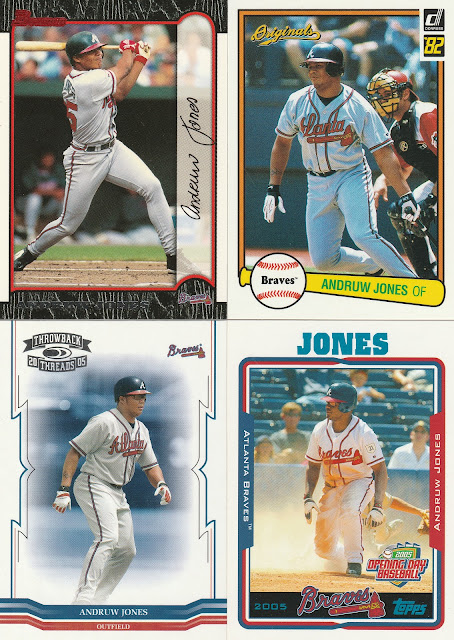 As Jones matured with Atlanta, his skills also became sharper. He would become arguably the greatest defensive center fielder of all time while patrolling Turner Field. Barry Bonds (Willie Mays' god son) was quoted as saying Jones "plays center field like no one I've ever seen in my life time." He would win 10 consecutive Gold Gloves in the National League. His peak years (1998-2006), Jones averaged .270/.347/.513 with 35 homers, 99 runs scored, 104 RBI, and double digit stolen bases. He was a 5-time All-Star in that stretch, and won a Silver Slugger in 2005, thanks to his league leading 51 homers and 128 RBI. 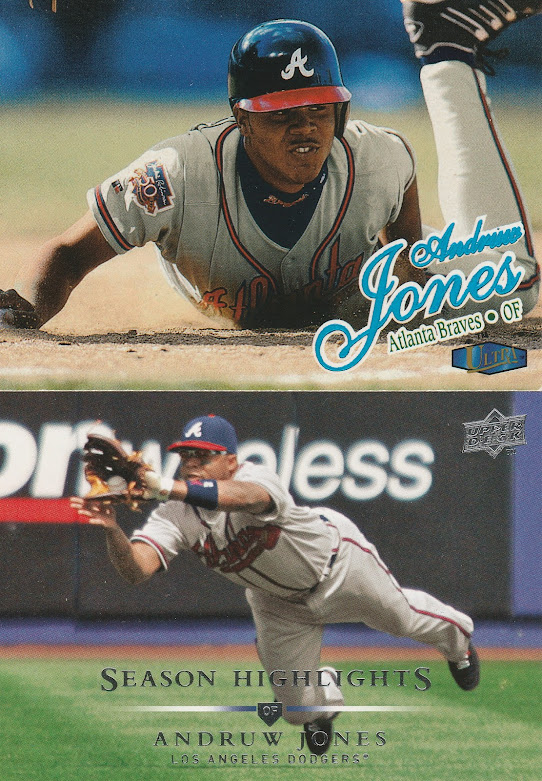 His final season in Atlanta was perhaps a bad omen of things to come. He still hit for power with 26 homers and 94 RBI, but his batting average had plummeted to .222 and he had a career low with an OPS+ of 87. He still won a Gold Glove in CF, leading the NL in putouts, but he seemed to have lost a step or two in some of the advanced (if flawed) defensive metrics like Total Zone Runs and Range Factor. As Jones got older, his body type changed as he worked on hitting for power at the expense of speed. The charitable verdict on Jones is that he was overweight, the cynic may try to link his decline to the alleged use of performance enhancing drugs. From what little research I could do for this post, I didn't see a smoking gun for PEDs, just some circumstantial evidence of the obvious physical transformation that can be seen on his baseball cards. I don't put much stock in the steroids theory, but it seems like his decline was abrupt and tragic for a ballplayer with such a meteoric rise. 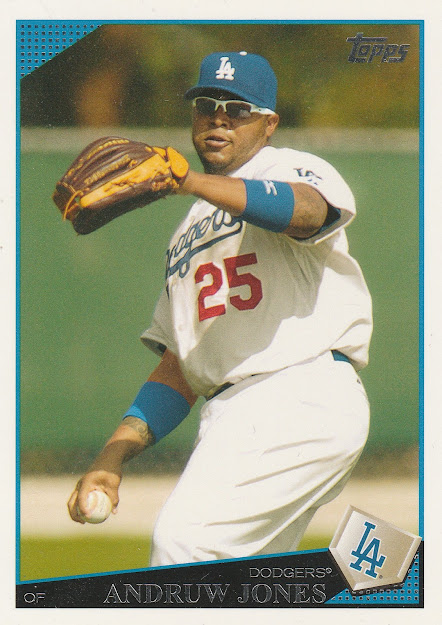 Jones signed a big free agent contract with the Dodgers, that didn't really pan out. His 2008 season included a long layoff following surgery to repair torn cartilage in his knee, and an abysmal 75 games in which he hit just .158 with 3 homers in 209 at bats. His free swinging ways, which had been a quirky and acceptable vice in his younger days was now responsible for derailing his production at every turn.

Keep in mind that Andruw was still just 32 years old when he made the Rangers' roster as the 25th man. He was a non-roster invitee but showed enough in Spring Training to find a spot on the roster. He was intended to be a 4th outfielder, but instead found most of his at bats as a DH. He hit 17 homers, but hit just .214 for the season. One bright spot in his game was that he had managed to develop some latent on base skills, walking at a career high rate of 13.6%.  His OBP ended up more than 100 points higher than his batting average. He would end up playing just one season in Texas before moving on. 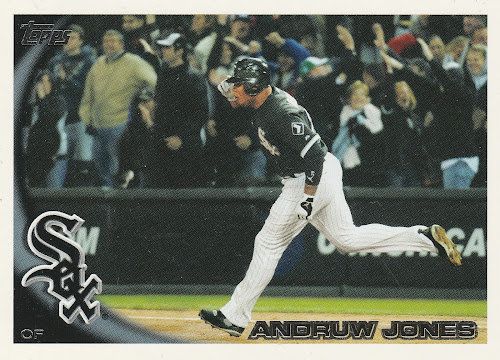 In 2010, Jones would play on the South Side, getting a Walk off homer (seen here, maybe?) in April against the Mariners, which led to his 400th career homer in July. he came into White Sox camp 30 pounds slimmer than the year before, which certainly made a difference. He surpassed 100 games played in a season for the first time since 2007. Jones played in the OF again, but wasn't the fielder we once was. His walk rate was again a career high, at 13.7%, and even stole 9 bases, which was the most he'd stolen in a season since 2001. His "Power/Speed" number was again in double digits, and he had an OPS+ of 120, once again proving his undeniable baseball talent. 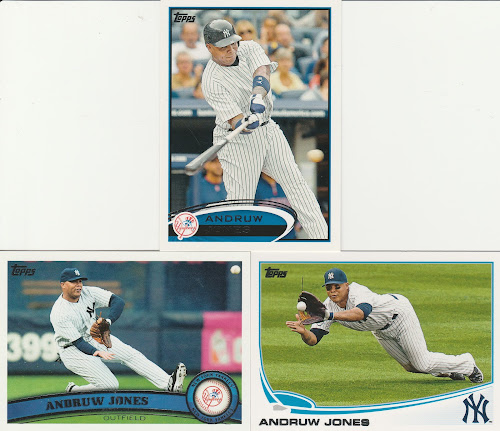 Jones would sign on with the Yankees, hoping to build on his success in Chicago and perhaps get back to the post season. His first year as a bench player went quite well - he had a 126 OPS+, his highest since his last All-Star season in 2006. He got on base via the walk, hit for a little power (13 homers), and filled in admirably in the corner outfield when called upon. 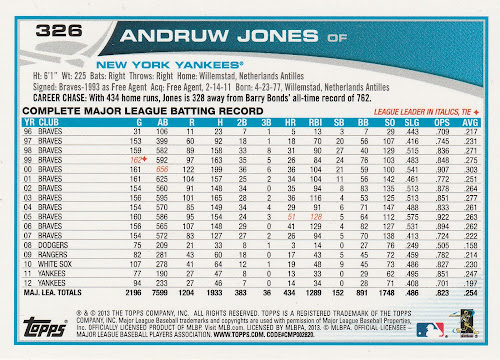 His Final MLB season did not go nearly as well, though he hit 14 homers and drove in 34. His rate stats had all declined, and he was striking out at a higher rate than he had in several years. He was left off the post season roster in 2012, and was looking for another chance in 2013. He represented the Netherlands in the World Baseball Classic and was looking to showcase his skills, hitting .333/.447/.370 in the tournament. He would sign with the Rakuten Golden Eagles in the Japanese Pacific League, was instrumental as the team's DH. The team won the league championship in 2013, thanks in no small part to Jones' 26 homers and 94 RBI. He played again with the Eagles in 2014, and tried another comeback with Atlanta in the Spring of 2015. He did not make the cut, and was out of pro ball at the age of 38.
Do you think Andruw Jones is a Hall Of Famer? The best Center Fielder of all-time? Any specific Jones memories you'd like to share? I'd love to read them in the comments below. Thanks for reading!
Posted by Brian at 7:46 PM