In 1981, the Astros finished with their division's best record in the 2nd half, propelling them to the ALDS (ahem NLDS) against first half champs, the Dodgers. In September of that year, Nolan Ryan tossed his 5th No-hitter, passing Sandy Koufax for most career no-nos. The team took the Dodgers to a 5th and final game in the ALDS (CoughNLDScough) but would lose after Jerry Reuss pitched a shutout. It was the Astros' 2nd straight appearance in the playoffs. 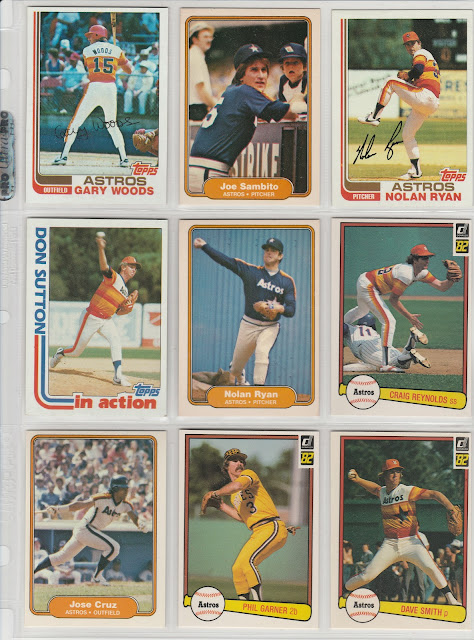 1982 had the makings of an even bigger year for Houston, adding Ray Knight to help bolster the offense. Instead the team would flounder, and fall from 1st to 5th place in the NL West, with a 77-85 record. The offense was mostly to blame, but a slow start overall doomed the '82 squad from the beginning. They would be back in contention again soon, though it would not be until 1986 that they would win their division again. Following the 1982 season, the team made one of the most productive trades in their franchise history, acquiring Mike Scott from the Mets for Danny Heep. Scott would be become the team's ace, which is saying something with a rotation that featured Nolan Ryan and Joe Niekro. 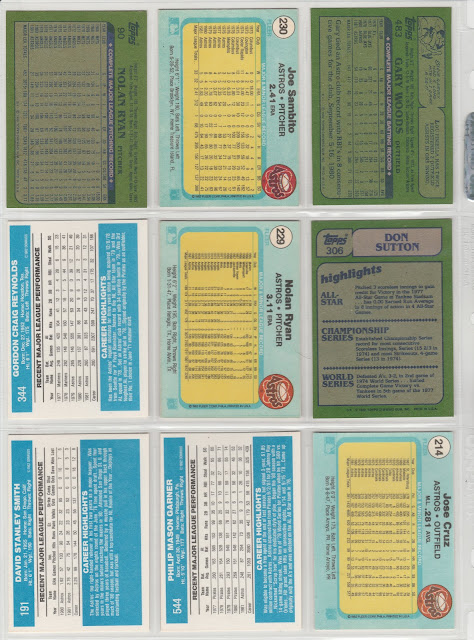 The Cards:
Topps #483 Gary Woods - Woods made an impression in Houston in the playoffs more than the regular season. He was a September call-up in 1980, and his .377 average in the final month helped get the team into the NLCS against the Phillies. They had him in the lineup in Game 4 of that series, hitting cleanup and starting in Right Field. He was 0-2, but walked and stole a base. He was called out on the bases on appeal after leaving the bag early on a sac fly. The Astros would lost the game in extra innings. In 1981, he would struggle in limited time as a platoon/reserve outfielder, hitting just .209 for the season. This time, he would go hitless in 2 plate appearances in the ALDS. Woods would spend the rest of his career with the Cubs as a valuable bench option.

Fleer #230 Joe Sambito - Joe Sambito's injury early in 1982 may have been one of the team's bigger setbacks, leading to their 5th place finish. The lefty reliever was a key part of the Astros' pen, much like a Josh Hader or Andrew Miller in recent years. He was the team's closer in 1979 and was an All-Star. He notched 22 saves and had a 1.77 ERA in 91 innings pitched. He had just pitched in 9 games in 1982 before going on the shelf, having saved 4 games and a 0.71 ERA. The injury resulted in Tommy John surgery for Sambito, who would miss the 1982 season and the 1983 season. He would come back and found a role with the Red Sox in time for their 1986 World Series run as a crafty lefty specialist.

Topps #90 Nolan Ryan - On September 26th, 1981 Nolan Ryan made history against the Dodgers. He struggled early in the game with his control in the nationally televised contest, including a wild pitch, that could have led to a run before he had even allowed a hit. Ryan settled in and adjusted his mechanics mid-game. The shorter stride allowed Ryan to regain the accuracy of his deliveries and he finished the game with 11 strikeouts. This no-no came at a great time- the team was fighting for a playoff spot in the NL West, and the Dodgers were the team they needed to beat.

Topps #306 Don Sutton - The Astros acquired Sutton after the 1980 season to join a rotation with Ryan and J.R. Richard. The trio seemed poised to take the National League by storm. Richard of course was in his prime when a blood clot caused a stroke in July of 1980, ending his career. Sutton was instead replacing Richard in the Rotation, and pitched well in '81, tying the team lead for victories. He also contributed 3 shutouts in 81. A line drive to his knee in final days of the season kept him out of the playoff series against his former team, the Dodgers. Sutton was vocal about the business side of baseball, which led to his request for a trade halfway through his 4 year deal with Houston. He clashed privately and publicly with Houston GM Al Rosen, ultimately being traded to the Brewers. The silver lining of course was that he would be instrumental down the stretch for another playoff run. The Brewers won the division on the final day of the season with Sutton pitching 8 strong innings. He would also be the Stopper in the ALCS against the Angels, winning game 3 with the Brewers' backs against the wall.

Fleer #229 Nolan Ryan - Ryan's Astros Career included several milestones - He hit his first MLB home run and struck out his 3,000th batter in 1980. 1981 was the year of his 5th no-hitter. In 1983 he passed Walter Johnson to become #1 on the all-time strikeout list, He would get strikeout #4,000 in 1985, and both of his NL ERA titles came in an Astros uniform. Ryan remains the All-Time MLB strikeout leader and has the most no-hitters of any MLB pitcher. He was a nearly unanimous 1st ballot Hall of Famer (98.8%) in 1999. Hard to believe that he never won a Cy Young award.

Donruss #344 Craig Reynolds - Reynolds was a Triples machine in 1981, leading the NL with 12 three baggers. He actually got 3 of those triples in one game in a May contest against the Cubs. He would lose his everyday shortstop gig to prospect Dickie Thon in 1982, but would be right back at it in 1984 - hitting 11 triples to finish 4th in the league. Reynolds was an original Seattle Mariner, coming to the team after the 1976 season from the Pirates. Reynolds was a 2 time All-Star; first as the Mariners' lone representative in 1978, then as an injury replacement for Garry Templeton. His son Kyle played several seasons in the Chicago Cubs' minor league system.

Fleer #214 Jose Cruz - You may have been expecting Nolan Ryan's Donruss card to be in this slot to keep the pattern going, but instead I opted to go with another player. Cruz was right in the midst of his peak playing days in 1981 and 82, playing as the everyday left fielder for the Astros. Though not really counted on as a power threat, he was the Astros' leader in homers in 1981. Oddly, he stole just 5 bases that year having been known as a expert base stealer. Cruz was an All-Star in 1980 and 1985 for the Astros. He led the NL in hits in 1983, and won the first of two Silver Slugger awards in his career. His son Jose Cruz, Jr. was a Topps All-Star Rookie!

Donruss #544 Phil Garner -  This card was selected because there is a well-known reverse negative variation - Night Owl has a whole post on it - but Phil Garner was a worthy subject for discussion in his own right. Garner was a big piece of the 1979 "We Are Fam-A-Lee" Pirates World Series team, hitting .500 with 4 doubles and 5 RBI in the series, and a .417 average with a homer in the 79 NLCS. He was traded mid season to the Astros in 1981, which explains the Pirates uni on the card. His playoff prowess did not translate to Houston, going just 2-21 in the 1981 NLDS, and 2-9 in the 1986 NLCS. Garner came up with the Oakland A's narrowly missing their three-peat run, though he did play in the regular season in 73 and 74. Garner's Houston run lasted 7 seasons. He finished his career with nearly 1,600 hits.

Donruss #191 Dave Smith - When Joe Sambito went down, it was up to Dave Smith to step in as the team's Closer. He did ok that first season in the role, with 11 saves in 14 opportunities, but overall he had an ERA+ of just 87, well below league average. He was successful in 1980 and 81 as a set up man for Sambito, and would return to that role in 1983 and 84. Eventually he would again assume the closer role for Houston, and hold on to it for several seasons in the mid to late 80s. In 1986 he was an All-Star, and even garnered a few down-ballot MVP votes to finish in 17th place. A second All-Star appearance came in 1990. He retired following the 1992 season with 216 career saves. His 13 year career included an Astros' franchise record of 563 pitching appearances.
Posted by Brian at 5:12 PM