Junk Food Can Be Quite Filling! 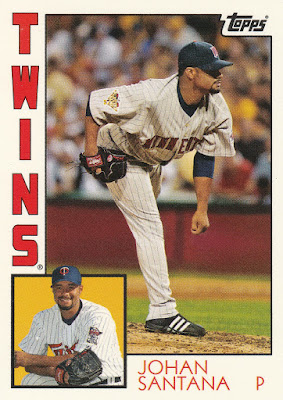 Bo from the fantastic blog Baseball Cards Come To Life! sent me an e-mail letting me know he had some Johan Santana cards in need of a new home. Happy to help! 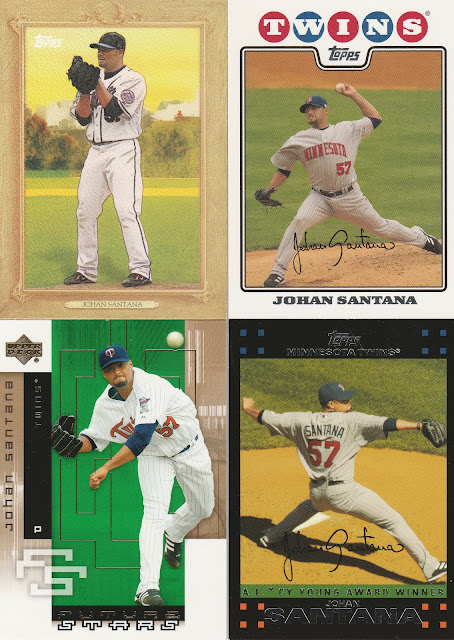 There was a great selection in the package of Santana cards, both vertical ...

Then a funny thing happened. Bo also mentioned he might have a few cards from my Junk Wax want list. 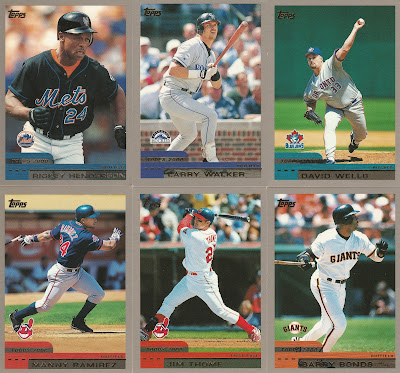 There were PC guys 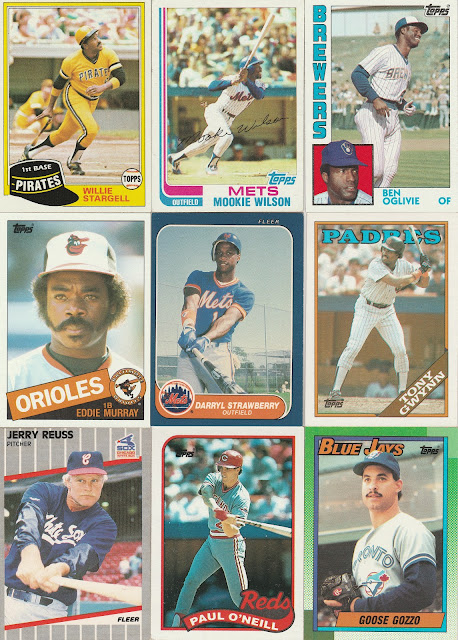 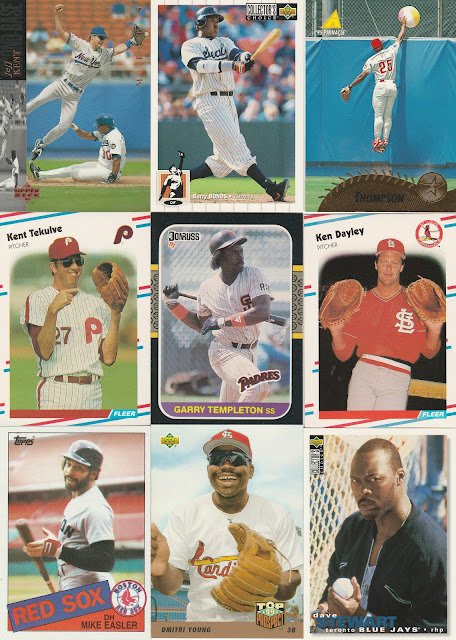 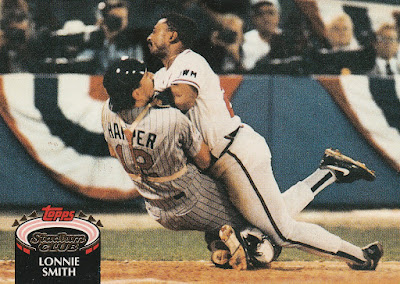 Great stuff Bo, thanks so much! I am trying to gather a suitable return from your want lists.
Posted by Brian at 8:30 AM 1 comment:

Feel free to call this the final installment in the late Summer Topps Product Trilogy. Topps Bunt, Allen & Ginter, and now Topps Chrome. Update will be out soon, I'm sure, but for now I've caught up and gotten a sampling of everything out there in retail. 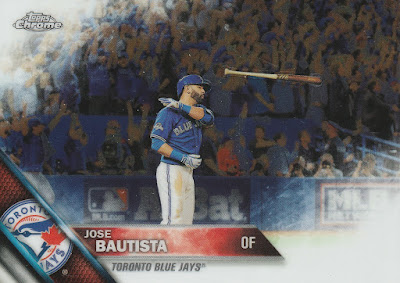 Still love this card - don't care what version or parallel it is. Wish all cards could catch an awesome moment like this,  but if that was the case, there probably would be fewer releases each year. 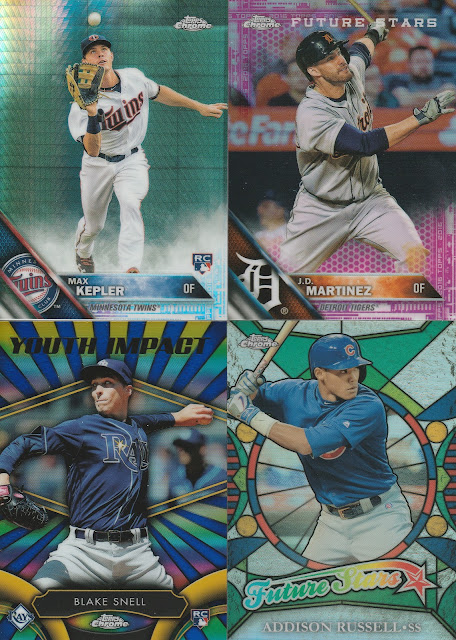 I went for a hanging three pack, so it came with some pink parallels. I like the Future Stars insert, stained glass is usually a good choice as a design element. 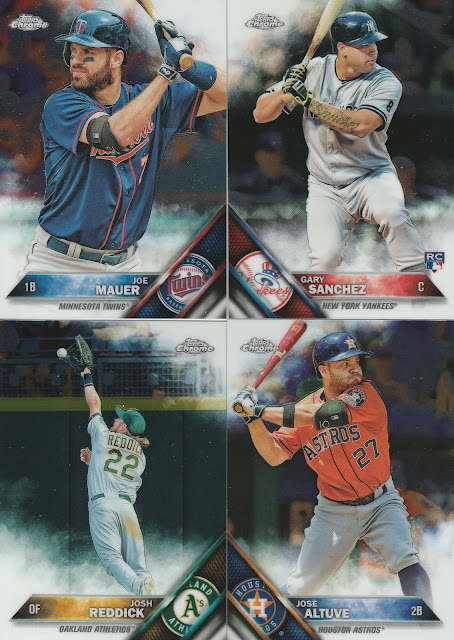 Here's just a random sampling of the base cards - nothing too fancy or unexpected in the packs.

Chrome is neat, but I probably won't spend any more money on it this year.
Posted by Brian at 8:09 PM 5 comments: 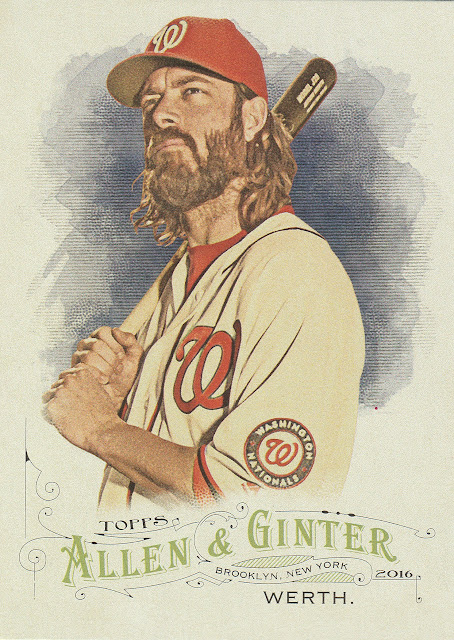 I bought a couple hanger packs of A&G last week, I actually love the cards themselves. The heavy card stock is great, the splash of color is much nicer than previous incarnations. But! I am really only interested in the baseball cards, so here's where you all get to call dibs on some cardboard. 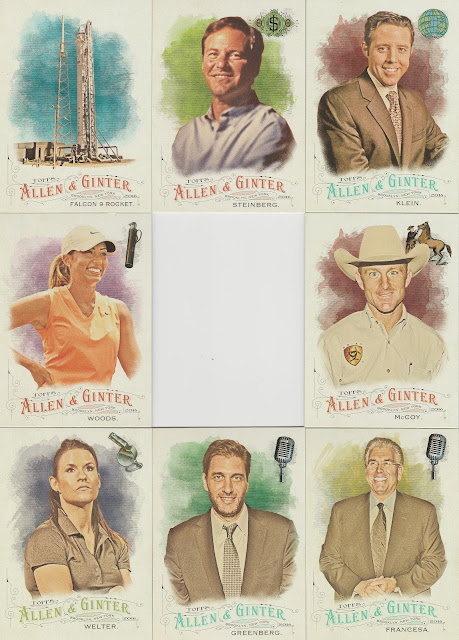 These could be yours! 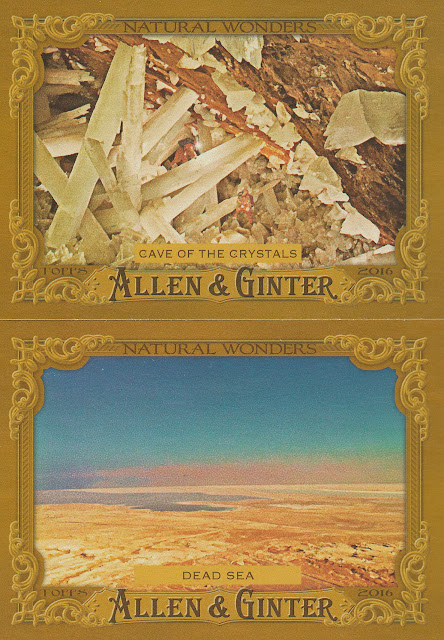 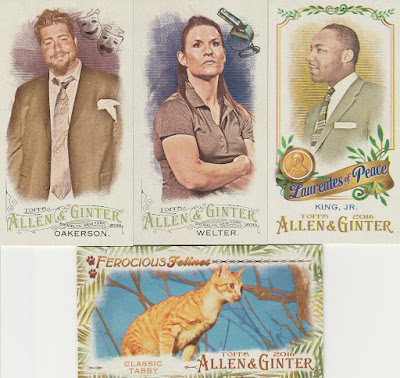 Or these minis! Oakerson is an A&G back, the rest are all standard backs, as far as I can tell...

If we've traded before, I'll include your requested cards in the next PWE or bubble mailer headed your way.

If we haven't - why not? Let's work something out. There's a contact form on the blog, or put your e-mail in a comment below and I'll get back to you as soon as I can.
Posted by Brian at 8:30 AM 8 comments:

Topps Lays Down A Safety Squeeze 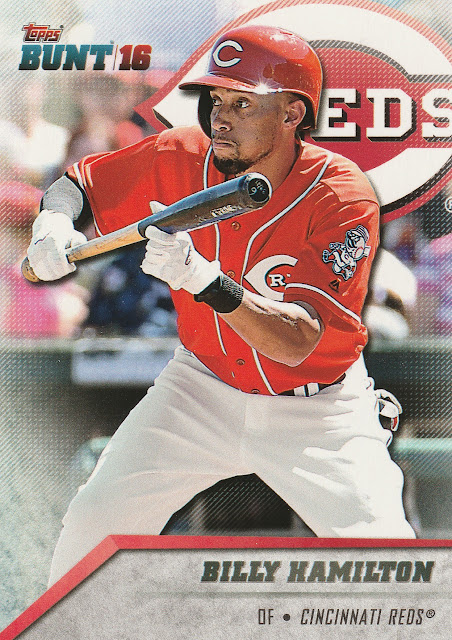 These are Topps Bunt, the cardboard version. It's pretty surprising to me that these exist, I thought the point of Topps Bunt was that they were digital cards as opposed to physical ones. There were several insert cards that had codes on the back to download free digital packs. 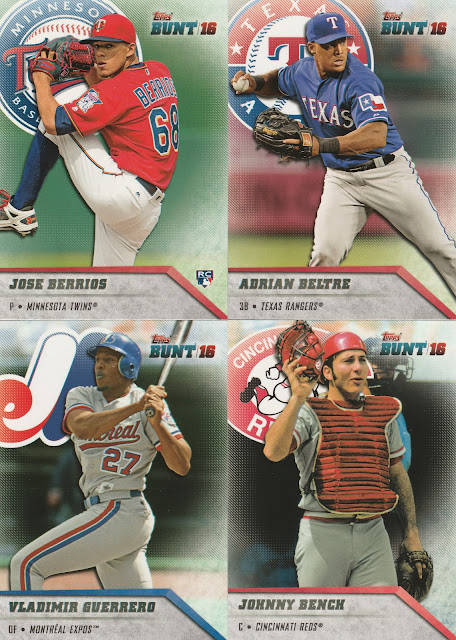 The price was right for these, and they made me think - hey, why aren't these the Opening Day cards? Like, it's obviously something Topps has interest in making - a card set that is both affordable and different from flagship. The blaster was $9.99 at Target. As you can see, it's a Stadium Club-esque mix of rookies, Stars, retired stars, and Hall of Famers. 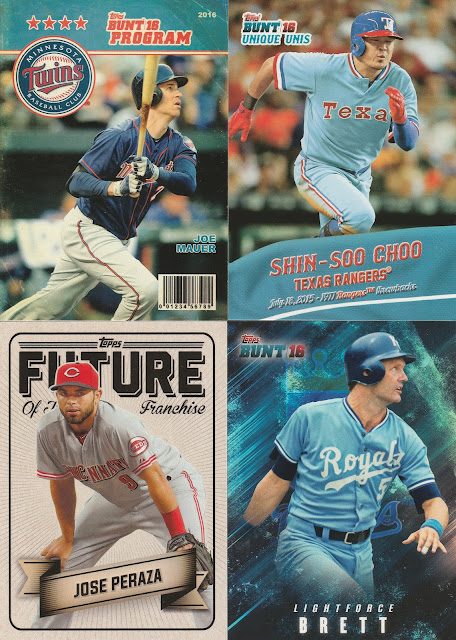 Here are the insert sets that I found in my packs - the Program is probably my favorite of the bunch.

No Stats on these, which is another reason why I think this should be the Opening Day set - just put some copy on the back about the player's opening day exploits (or lack thereof). I liked these a lot more than I thought I would... Despite the question of why did they make these, I think this is a solid (if safe) product from Topps. If I had a vote in these things, I'd ask that Opening Day and this product merge into one thing - new designs for opening day versus Series One, still cheap, still full of all those cheesy inserts that Topps loves so much.
Posted by Brian at 8:30 AM 8 comments:

By 1980, the Blue Jays were eager to shed their "expansion franchise" label. The team was starting to gain experience for their younger players - Alfredo Griffin, Lloyd Moseby, Danny Ainge, Damaso Garcia, Jim Clancy, Dave Steib, and Luis Leal - all under the age of 25. Veterans like John Mayberry and Otto Velez provided leadership and offense. The team struggled to win games, however, finishing in 7th place in the AL East. 1981 continued the youth movement with a pair of 21 year old outfielders, Jesse Barfield and George Bell. It would be a few more years before the team would be in contention for the playoffs, but the building blocks were starting to fall into place. 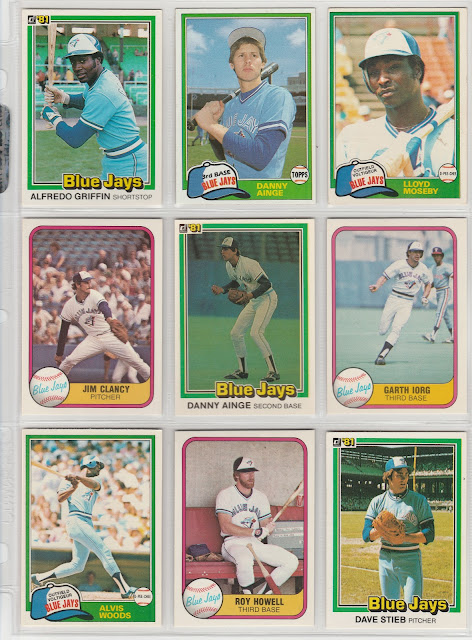 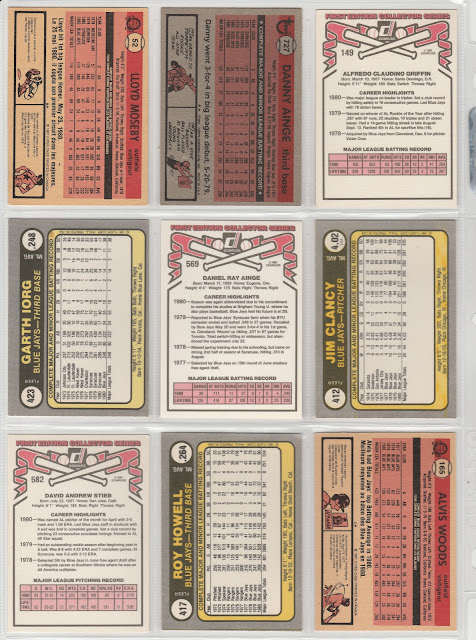 Donruss #149 Alfredo Griffin - Griffin led the Blue Jays in stolen bases and had 15 Triples in 1980. The 22 year old was the starting Short Stop for the Jays, and though he hit poorly all season, he dazzled with speed and defense at a young age. 1981 saw similar offensive deficiencies, and he continued to be caught stealing more often than he was successful. He made the 1984 All-Star team, and is a three time World Champion, once with the Dodgers in 1988, then returning to Toronto as a bench player for their back to back wins in the early 90s to close out his career.

Topps Traded #727 Danny Ainge - Ainge made one All-Star team, and despite a late start was a regular for more than seven seasons - he was known for going deep along with solid defense. He was a 2 time world champion and then moved on the the front office following his playing career. Oh- that was his basketball biography.

O-Pee-Chee #52 Lloyd Moseby - At the tender age of 20, Moseby played 114 games for the Jays, and became their regular Center Fielder. It took some time for him to develop, but he became a solid part of Toronto's lineup in the 80s. He would average 17 homers, 29 steals, and 75 RBI over the course of his career, making the All-Star team in 1986.

Fleer #412 Jim Clancy - It wasn't always the prettiest record, but Jim Clancy ate serious innings for the Blue Jays in the 80s. He tossed 250 innings in 1980 as a 24 year old,  while leading the AL in walks allowed. His control improved, and he tossed 200+ innings 5 times in the next 7 seasons. He represented the Blue Jays in the 1982 All-Star Game.

Donruss #569 Danny Ainge - The Blue Jays believed in the potential of 6'4" Danny Ainge to be a force in the lineup and at the hot corner. They were willing to take their lumps and give Ainge a starting role while he developed so he would stick to baseball. He was named to the 1979 Topps All-Star Rookie Team as a third baseman. The playing time in 1980 and 1981 was all Danny needed to decide that baseball was not his best sport, batting just .187 in his final season for the Jays. The Boston Celtics purchased his contract from the Jays, and the rest is history.

Fleer #423 Garth Iorg - Having Iorg around came in very handy for the Jays once Ainge left for the NBA, slotting in as the new third baseman in 1982. He was essentially league average from 1982 to 1987, providing a bridge to Kelly Gruber. In 1980 and 1981, Iorg was a backup infielder and role player.

O-Pee-Chee #165 Alvis Woods - Al Woods hit a career high .300 in 1980, and by 81 found himself in a crowded outfield of guys 5 years his junior. Woods was picked by the Blue Jays in the expansion draft in 1976 from the Twins. His first MLB at bat was a pinch hit home run.

Fleer #417 Roy Howell - Howell was one of the first players the Blue Jays acquired via trade, coming over from the Rangers in May of 1977 for a pair of players and cash. He became an All-Star in 1978, and was the regular third baseman for the Jays until the job was handed to Danny Ainge. Following the 1980 season, Howell was a free agent and signed with the Milwaukee Brewers.

Donruss #582 Dave Steib - If there's a Mr. Blue Jay from the 1980s, there's no better candidate than Dave Steib. He won 175 games in a Blue Jay uniform, was a 7 time All-Star, won the ERA title in 1985, and had a reputation for pitching inside. He led the AL five times in batters hit by pitch. From 1982 through 1985, few pitchers were close to him, amassing nearly 30 Wins above replacement in that span.
Posted by Brian at 11:30 AM 4 comments: