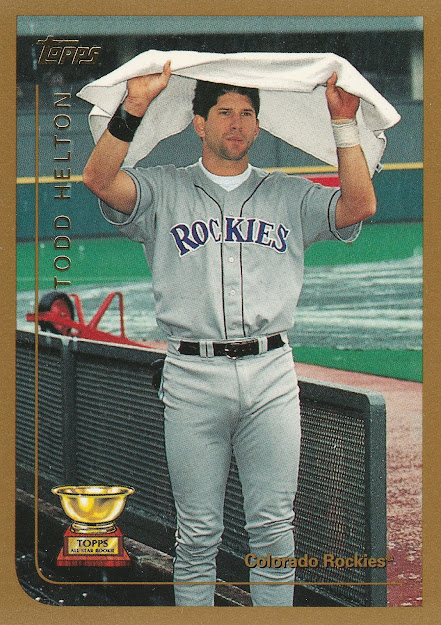 Moving ahead to the 1998 Topps All-Star Rookie Roster and we start with a great one. Todd Helton is a Hall of Fame caliber player, and his value as a hitter was evident from the very beginning. His 97 RBI as a rookie was the 2nd most in a quarter-century. Crow all you like about the "Coors-Effect" but know that few hitters had the success that Todd Helton did in the 2000s. Helton was definitely the easy pick for Topps All-Star Rookie at first base. He finished 2nd in the NL Rookie of the Year balloting, leading all NL rookies in hits, average, runs, RBI, Homers, Slugging, OBP, multi-hit games, extra base hits and total bases. 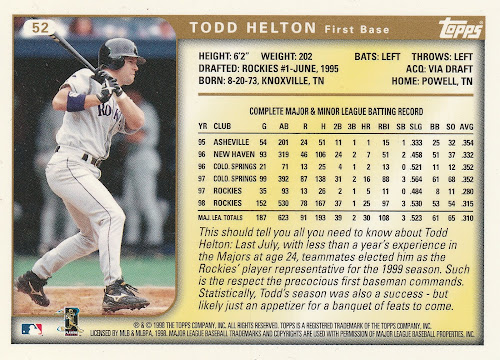 Helton not only led the league's rookie leaderboards, but also proved to be a team leader in the clubhouse from the start of his career. He was voted by his teammates to be the team's player representative during his rookie season, putting his University of Tennessee education to work! 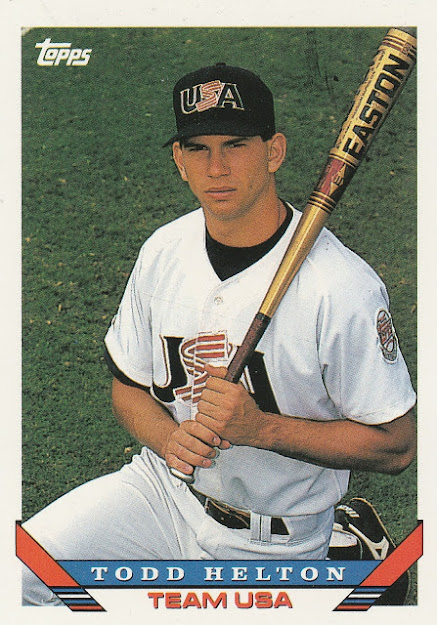 Helton was ready to shine from an early age - as a college Freshman, Helton made the Team USA roster. He was drafted out of high school by the Padres, but opted to attend Tennessee as a baseball and football player. His first two years, he was the Vols backup QB behind Heath Shuler, then was slotted behind Jerry Colquitt (and ahead of a punk kid named Peyton). A knee injury at QB ended his football career, and he focused his attention squarely on baseball. He was the 1995 National Collegiate Player of the Year (Dick Howser Trophy winner), providing value as a hitter and as a pitcher. He set a Tennessee school record for saves in 1995, and over the course of his collegiate career had a 2.89 ERA in 193 innings pitched. At the plate, he hit .370 for his career for the Vols, and was the school record holder in homers and RBI by the time he was drafted. 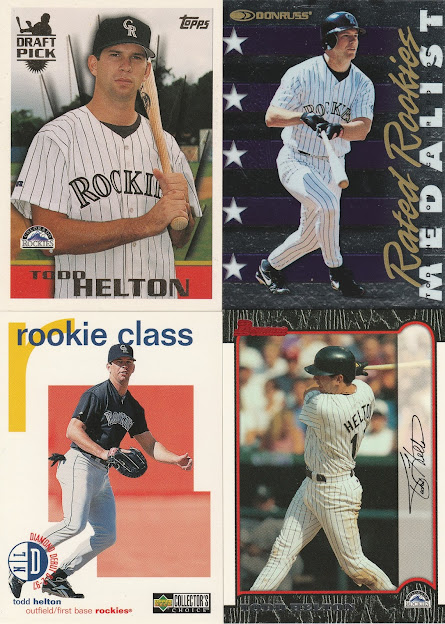 Helton was the #8 Overall pick in the 1995 draft, and immediately made his way to the Single A Asheville Tourists. He hit just .254 over 201 at bats and had just 1 homer while striking out more than he walked. Things would turn around quickly, as he blasted AA pitching in 1996. He hit .336 across AA and AAA that year, and walked 62 times while striking out just 49. The following year, He was hitting .352 in AAA for the first 99 games before forcing his way onto the big league roster. His MLB debut on August 2, 1997 found him in Left Field, where he hit his first career homer, and went 2-4 against the Pirates. 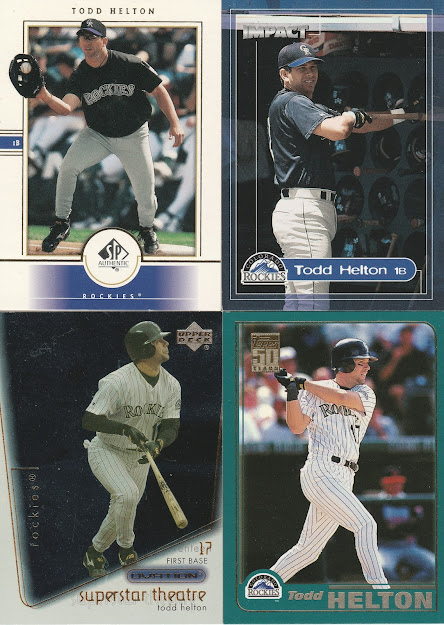 He would hit for the cycle in his 2nd full MLB season, and nearly duplicated the effort 4 other times that year but ultimately fell short. Nevertheless, his stats improved across the board from an already impressive rookie campaign, including an 80 point jump in his OPS. He eclipsed 100 RBI and 100 runs for the first time in his career, which he would repeat each year for the next 4 years. 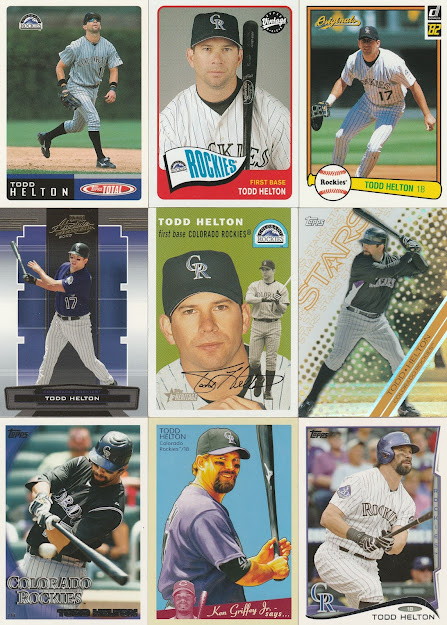 During his prime (1999 - 2006), Helton averaged a stat line of .336/.437/.603 with 100 walks, 116 runs, 111 RBI and 32 homers per season. 2000 was his career year - he led the NL in hits, doubles (59!), RBI, batting average, OBP, Slugging, (OPS obviously) and Total Bases. It was his first of 5 straight All-Star appearances, and he also brought home the Silver Slugger award. That 7 year prime included 4 Silver Sluggers and 3 Gold Gloves. Helton had 6 straight seasons of 30 or more homers and was an absolute on base machine. His batting title in 2000 would be his only one, though he was less 1/100th of a point away from a 2nd one in 2003, just behind Albert Pujols. The year 2000 was also his highest finish in NL MVP voting, ending up in 5th place. This could be called the "Reverse Coors Effect" as MVP voters were quick to discount a Rockie's numbers against the rest of the NL. It should also be noted that Pujols and Barry Bonds dominated the MVP discussion for much of Helton's prime years, leaving little room for him to make inroads on the ballot.

By the end of his career in 2013, Helton was the undisputed "Greatest Rockie of All-Time," leading the franchise in nearly every significant offensive category. For his career he amassed over 2,500 hits, 369 homers, over 1,400 runs, 1,400 RBI, and 1,335 walks. His 592 doubles rank 19th all-time in MLB history, and his career WAR is just below the average Hall of Fame first basemen. He was the first player in MLB history to record 35 or more doubles in 10 straight seasons. His career OPS+ of 133 does take into account his home field advantage and still places him well above the league during his career.
Does Todd Helton get your Hall of Fame vote?
Any specific Todd Helton memories you'd like to share? I'd love to read them in the comments below. Thanks for reading!
Posted by Brian at 5:42 PM