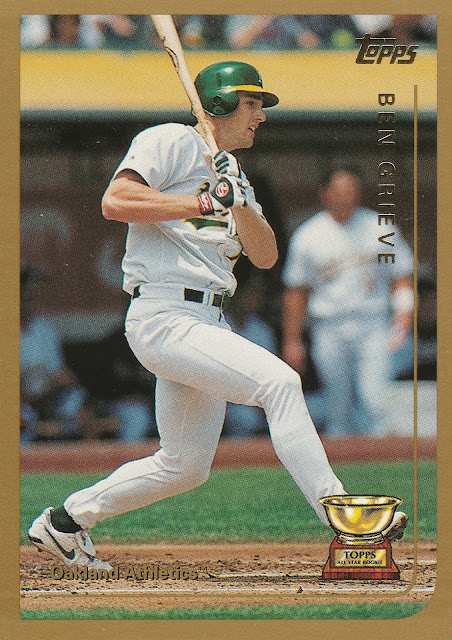 Many profiles of our next Topps All-Star Rookie want to know "What happened to Ben Grieve?" If you follow the trajectory of many phenoms / "can't miss" prospects, his story is probably a familiar one. Grieve had an MLB lineage (his father was a first round pick, too), to go along with a stellar prep career that had the scouts ready to fall all over themselves. Grieve backed up the hype in his rookie season with the A's - he set a franchise record for hits by a rookie, and made the MLB All-Star team en route to Rookie of the Year honors in the AL. Of course, that made him an ideal candidate for the Topps All-Star Rookie squad as well. 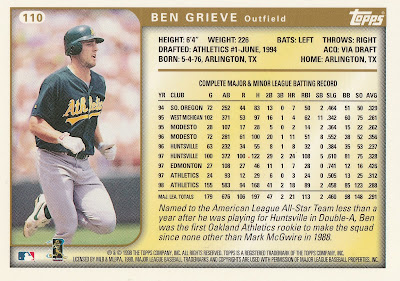 To give some perspective about how highly the A's thought of Grieve, he had more plate appearances that season than Rickey Henderson. Grieve's 41 doubles led the A's, as did his 168 base hits. Just 22 years old, Grieve was ready to take his place in Oakland A's history. 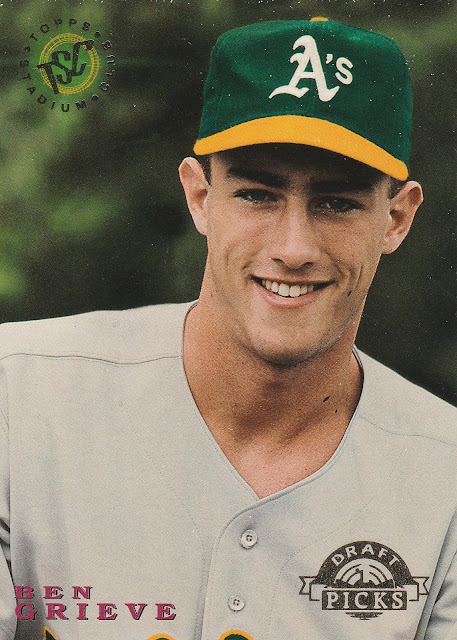 The Oakland A's selected Grieve #2 Overall out of high school in Arlington, TX. He grew up with his father Tom Grieve as a 9 year veteran MLB pitcher and later coach and GM. Ben's older brother Tim was also a talented pitcher, and Ben even got the chance to face off against him in the minor leagues. The MLB connection included getting hitting instruction from the then Texas Rangers hitting coach Tom Robson while Ben was in high school. 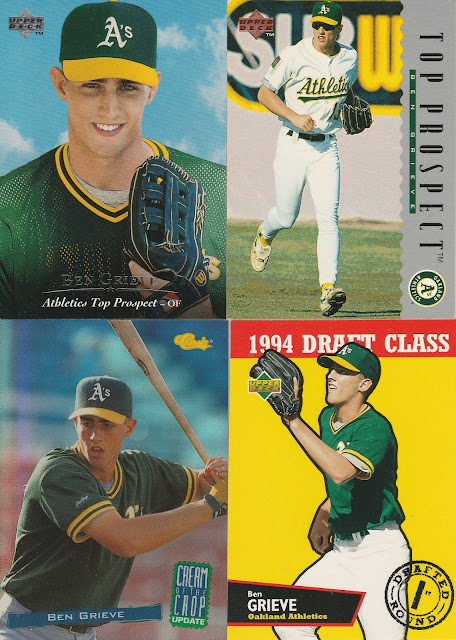 As prospects go, few were hotter than Grieve - he was the 1997 Minor League Player of the Year, have forced his way onto the MLB roster to finish the season. He slugged .610 with 24 homers in double A, then surpassed that with a SLG north of .700 in a handful of games in AAA Edmonton. He had already made an impression in 1996, hitting .356 for the season in Modesto. There was little doubt that Grieve was on his way to star status. 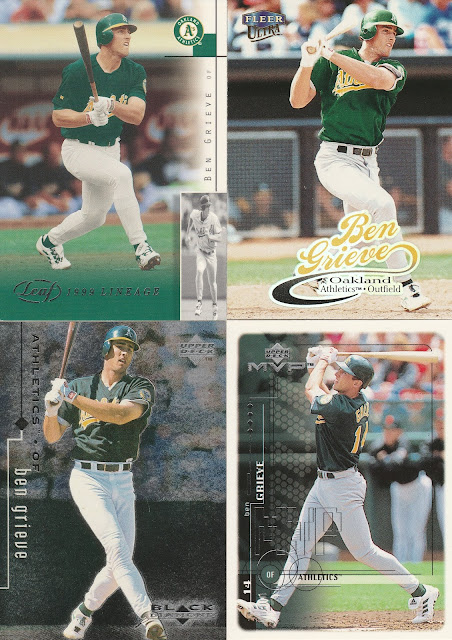 Despite the fact that Grieve's 1998 season was his only All-Star Appearance, his entire A's career was a success. Grieve follow up his Rookie of the Year campaign with a career high 28 homers. In 2000 he once again reached 40 doubles, this time with 27 homers, making it the highest slugging of his MLB career to date. He also topped 100 RBI for the first time, finishing the year with 104. That season marked his first appearance in post season play, where he struggled with a 2-17 with 7 strikeouts performance in the ALDS against the Yankees. Over the first 3 full seasons in the big leagues, Grieve was averaging 35 doubles, 25 homers, and over 90 RBI. 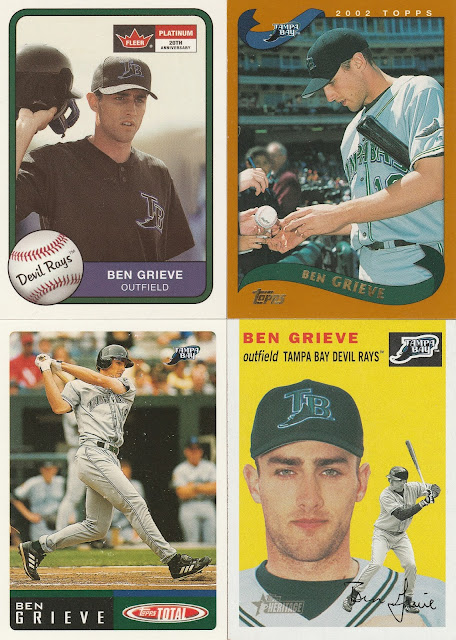 Before the 2001 season began, Grieve was traded to Tampa in a wild three team deal that sent Johnny Damon to Oakland, Angel Berroa and Roberto Hernandez to Kansas City, along with several other players flipping between Oakland and KC. Grieve was the lone player coming to Tampa Bay, and they certainly thought they were getting a steal. It's about this time when people started the "what happened to Ben Grieve" narratives, with his first season with Rays just 11 homers and a 100 point drop in his slugging percentage. After the trade, Grieve had gone from second banana behind Jason Giambi to top dog in Tampa. He was hitting 5th in the order after an older Fred McGriff and Greg Vaughn. He was making less contact in Tampa (certainly the roof in St. Pete was less inviting than California sun), setting a career high with 159 strikeouts. The positives? He still rattled off a pair of 30 double seasons, and his walk rate had improved considerably. Maybe the opposition was willing (and able) to pitch around Grieve now that he was the main focus of the lineup? 2003 added injury to insult, as a blood clot in his shoulder required surgery. He would play in just 55 games that year, his last in Tampa.

He was entering a free agent season after the injury, and was left with fewer options than a former ROY would normally expect. He landed in Milwaukee, where he was used in platoon situations for 108 games. He was on the move again the next year, taking a brief tour of the NL Central division. While the Pirates signed him initially, he would end up playing for the Cubs for a handful of games in 2004 and 2005. He moved to the south side after that, playing minor league ball for the White Sox for two more seasons.
Do you have any Ben Grieve memories? I'd love to read them in the comments below.
Thanks for reading!
Posted by Brian at 5:59 PM 3 comments:

The Expos clinched their first ever Playoff berth in 1981, despite the team's manager Dick Williams being fired in September by the front office with the team just a game and a half behind the Cardinals in the standings. They would lose 3 of the first 5 games under new skipper Jim Fanning, but squeaked out a narrow half game lead over the Cardinals by the end of the second half. They would go on to beat the defending champion Philadelphia Phillies in the Divisional round, but fell in 5 games to the Dodgers in the NLCS. The franchise would not return to the post season until after the team moved to Washington, D.C. 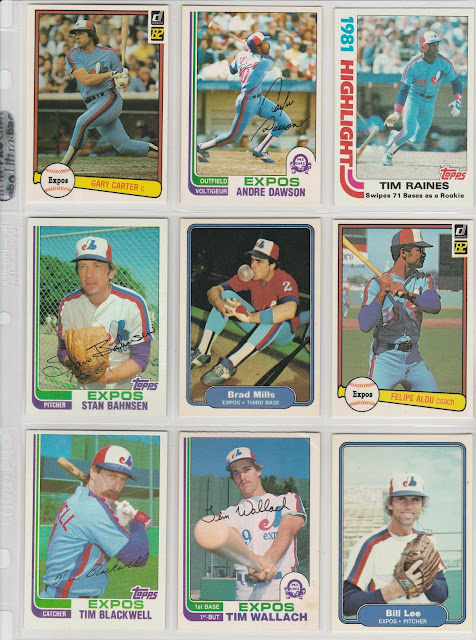 Despite missing the playoffs in 1982, the Expos were still a very good team, led by a trio of Hall of Famers. Carter, Dawson, and Raines were joined by fellow Expos Al Oliver and ace pitcher Steve Rogers in the All-Star Game. It was hosted for the first time outside of the United States and the only time in Montreal. Rogers pitched well and recorded the win. Ultimately the team finished third in the standings, behind the Cardinals and Phillies in the NL East. Despite the talented trio and more young players on the way, the team never finished higher than 3rd for the rest of the 80s. 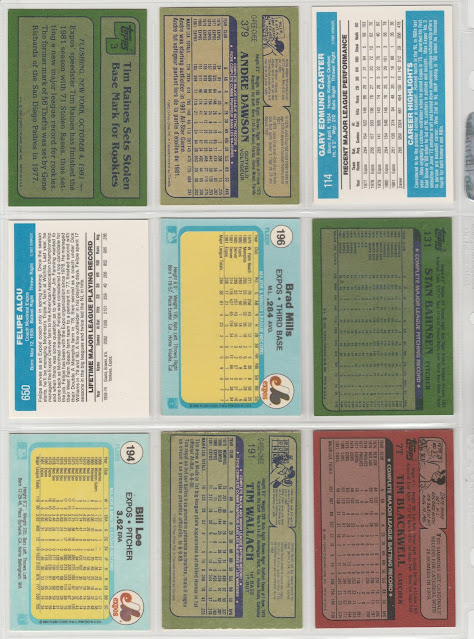