This is a series of posts on a 1980's Frankenset. Each page features a different team, with 9 of my personal favorite cards from that year's team. You might find players repeated, you'll definitely see brands repeated, but hopefully you'll agree that there are some interesting selections from the 1980s!
For the Rangers, the 1981 season showed promise of a possible run for the AL West crown, but a rough second half kept them out of the playoffs. The hope going into 1982 was that the team would go even further, but the opposite happened and they would tumble to the basement of the division, finishing with a 64-98 record. 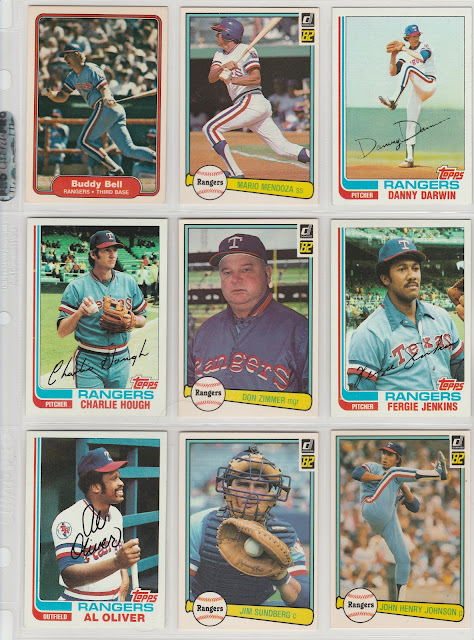 The Rangers had a lineup of veterans and youngsters, but the bats went cold early on and the team tumbled 20 games below .500 before manager Don Zimmer was dismissed. The team would continue to struggle throughout the 80s- 1994 would have been their next 1st place finish. 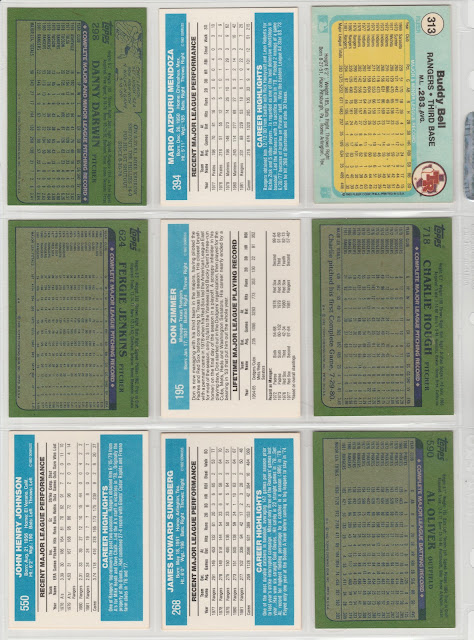 The Cards:
Fleer #313 Buddy Bell - In 1982, Bell made his 3rd straight All-Star team, and the 4th straight Gold Glove at third base. The award was no mirage- he led the league in range factor and fielding pct in 1982, and was the league leader in defensive WAR in 1981. Buddy's father Gus was a long time MLB player, and Buddy's sons David and Mike played several MLB seasons as well. Buddy's grandson Luke was drafted in 2019 by the Diamondbacks in the 34th round.
Donruss #394 Mario Mendoza - Mario was unfairly tagged as the namesake of "the Mendoza Line," as a late surge towards the end of his career would vault him above the line, retiring with a robust .215 average. Mendoza's 1981 season included a .245 average to make the big difference. His claim to fame notwithstanding, Mendoza's best skill was his glove, and in 1981 he did rank 9th overall in defensive WAR, given the full time role at short.
Topps #298 Danny Darwin - Darwin had a great season in 1980 primarily out of the bullpen, then a rough season in 1981 as a full-time starter. In 1982, Darwin returned to the bullpen and found success again with a 10-8 record, with 7 saves and a 3.44 ERA. Starting in 1983, he would flip back again to a full time starter, which would be his role for the remainder of his career. He was the NL ERA title winner in 1990 with the Astros, but was not part of the Cy Young vote. He spent 8 seasons with the Rangers and had 5 shutouts for the team.
Topps #718 Charlie Hough - Hough shows off the knuckleball grip. Hough spent the entire decade of the 1980s as a starter in the Rangers rotation, and became the team's all-time leader in Wins, Strikeouts, complete games, and losses. He had just converted to a knuckleball pitcher in 1979, and the pitch allowed him to move from the bullpen to become a starter. He'd win at least 10 games a season from 1982 to 1990, and ended his career with a symmetrical 216-216 record.
Donruss #195 Don Zimmer - 1982 was a rough one for the Rangers' skipper, losing the gig after starting the season with 38-58 record. He was the 1989 Manager of the Year, taking the Cubs to an NL East Division Title. He was nicknamed "The Gerbil" by Bill Lee
Topps #624 Fergie Jenkins - The Hall of Fame hurler was making his second run with the Texas Rangers in 1980 and '81. He had probably his best MLB season his first time through the Rangers' org in 1974, when he posted a 25-12 record and an eye-popping 29 Complete Games. Doing so in the oppressive heat of Texas makes it all the more impressive. In 1980, Jenkins was 12-12 with 12 complete games. He would pitch another season in Texas, then two more campaigns with the Chicago Cubs before retiring with 286 career victories.
Topps #590 Al Oliver - "Scoop" took over for Richie Zisk as the Rangers primary DH in 1981, but had an even bigger post-Texas season in 1982. Now with Montreal, Oliver would win the NL Batting Title, while also leading the league in hits, doubles, total bases and RBI. He'd finish 3rd in the NL MVP vote that year. For his career, he had over 2700 hits and was a 7 time All-Star.
Donruss #268 Jim Sundberg - A Six Time Gold Glove winner behind the plate, Jim Sundberg also collected over 1,400 career hits. Sundberg was part of the 1985 KC Royals Championship team. He led the AL in runners caught stealing 3 times. He was inducted into the Rangers Hall of Fame in 2003 as one of its charter members. Jim was the Rangers' primary catcher in 1982 and had 10 homers with a .251/.322/.383 Triple slash.
Donruss #550 John Henry Johnson - John Henry was a short relievin' man. He spent 1982 in the Red Sox minor league system. He made 74 appearances over 3 seasons in Texas - he posted a 3.86 ERA. He was a 1978 Topps All-Star Rookie, and was part of the 7 for 1 deal that send Vida Blue to the San Francisco Giants. Over his career, Johnson had a 3.90 ERA over 214 appearances, pitching for 4 different teams.
Posted by Brian at 6:46 PM