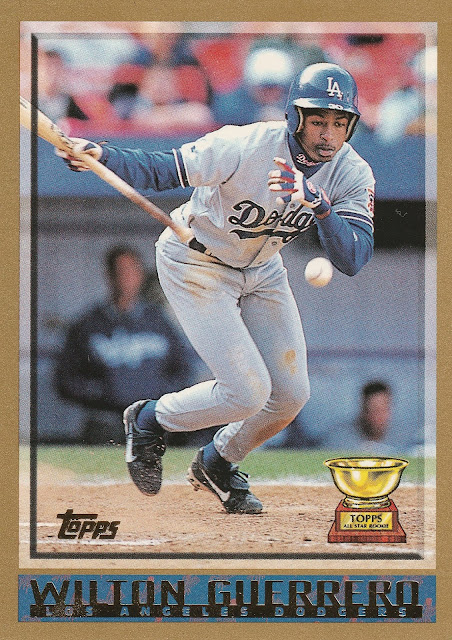 A person could spend a lot of time writing about what Wilton Guerrero was not. He was not his brother Vladimir, he was not a Rookie of the Year like Dodger rookies were the prior five years, he was not the second baseman of the future. BUT! Wilton Guerrero was a very talented baseball player who may have been rushed to the big leagues before he was ready. While he may not have become a super star like his brother, he will forever have one thing over him - Wilton was a Topps All-Star Rookie! 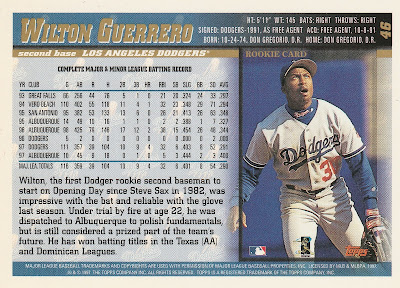 Guerrero was a great hitter, with great contact skills. He wasn't a power hitter, but with his speed, he didn't need to be. In 1997, he had 9 triples, which led the Dodgers and was 3rd best in the National League. He was just 22 years old when the Dodgers made him their everyday 2nd baseman. The LA Dodgers were no strangers to starting rookies, and promoting young talent from within. The Rookie of the Year award is named after Dodger great Jackie Robinson. But the issues with Wilton's game were known before his call up. He was still given free reign to learn the finer points of the game on the job. He would start the 1998 season back in Triple AAA Albuquerque.

Signed in 1991 as a free agent out of the Dominican Republic, Guerrero had raw speed in spades. He also could hit for average. As an 18 year old, he hit .294 with 20 stolen bases in just 60 games in single A Great Falls. Guerrero would continue a steady climb up the Dodgers ladder, winning a batting title in 1995 for the San Antonio Missions. In 1996 with AAA Albuquerque, Guerrero again hit well, with a .344 average and 12 Triples.

His tenure in LA was marked by decent hitting and speed, but also a series of mistakes that caused other players and coaches to become frustrated with the player they had lauded as a future star. In 1997 he was suspended for 7 games after it was discovered that his bat was corked. Despite stealing at least 20 bases a season in the minors, he stole just 6 bases while being caught 5 times in his rookie year. He would be traded to Montreal early in 1998 to reunite with his brother Vladimir. 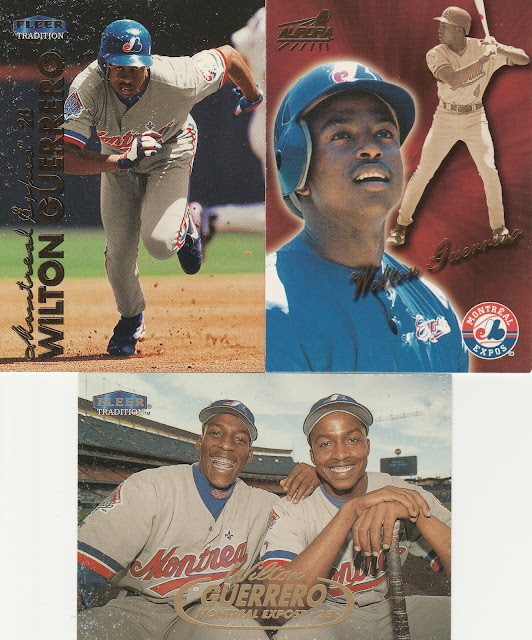 With the Expos, Guerrero was not expected to be the everyday anything - he was the every other day everything. He would play all over the infield and occasionally fill in as an outfielder. He continued to hit well, even with limited at bats. He had found his niche as a utility player. He also found that his brother was very competitive. Wilton's last 3 homers as an Expo came on the same day as a Vladimir home run. He continued to hit Triples, ranking top 10 in the league in 1998 and 1999. 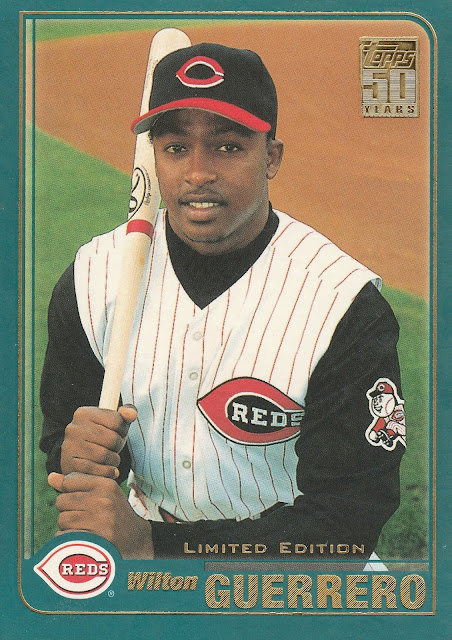 Wilton would sign with the Reds as a free agent before the 2001 season, and again had a great season playing all over the field. In 60 games, Guerrero hit a career high .338. He was traded twice in the same day in 2002 - going from the Reds to the Marlins to the Expos, part of a series of deals by the Marlins that sent away Ryan Dempster, Cliff Floyd, and several others. Following his 2nd tour with the Expos, Guerrero played with the Royals in 2004. He had a pair of very good seasons in AAA as well, once again finding his legs, stealing 30 bases with the Reds AAA squad in 2003, and hit .326 in AAA Omaha before the Royals called him up in 2004.

Following his playing career, he co-founded the Guerrero Baseball Academy in the Dominican Republic with his brother, and he continues to run the school to help train the next generation of baseball talent. Wilton's son Wilton Jr. is still several years away, but you can see his hitting showcase here.

Do you have any Wilton Guerrero stories? I'd love to read them in the comments below. Thanks for reading!