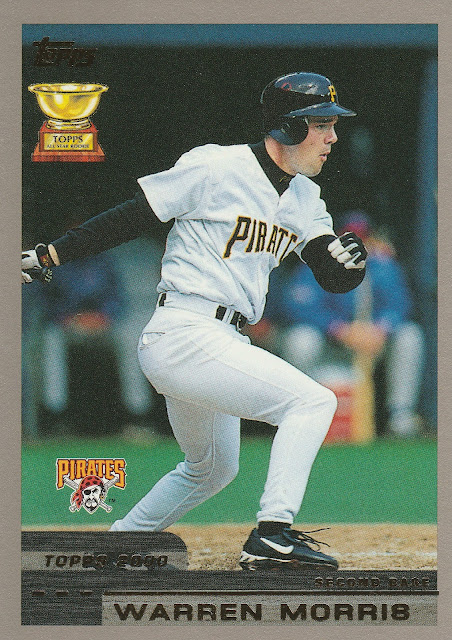 Many Topps All-Star Rookies have a fun anecdote or two about their path to the big leagues, and Warren Morris is no different. He's best known for his College World Series heroics, and he was also an Olympian, helping Team USA Baseball win Bronze in the 1996 Summer Games. Three years later, he was the Pirates' everyday second baseman as a rookie. His offensive stats were just about league average for a second baseman, but coming in his rookie year, average is very good. His 73 RBI led all NL rookies and were the most by a Pirates' rookie since Ralph Kiner! He collected his first major league hit on Opening Day, a double. He had a torrid first half, hitting .301 with 11 doubles, 9 homers, and 47 RBI. All this made him the obvious choice for the Topps All-Star Rookie team. 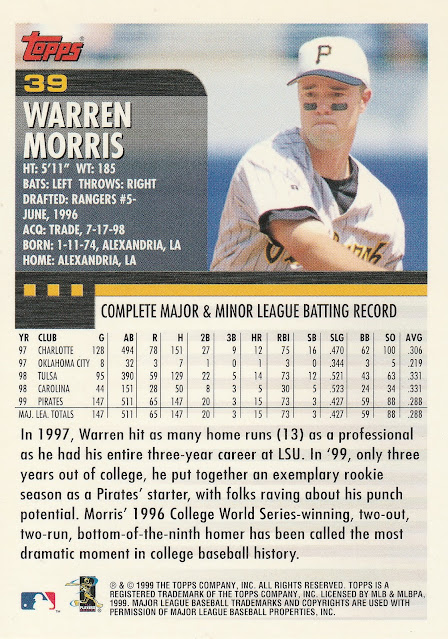 The Pirates acquired Morris along with former top prospect Todd Van Poppel from the Rangers close to the Trade deadline in 1998. Morris would be given the chance to be the team's second baseman when the Pirates decided to part ways with Tony Womack before the start of the 1999 season. Morris made his case for the spot in the Arizona Fall League in '98, leading the short season league in slugging percentage, a stat that was never Womack's strong suit.

Morris was originally drafted by the Texas Rangers out of LSU in the 5th Round of the 1996 June Draft. Morris still found time to lead Team USA in homers in the 1996 Summer Games while hitting a robust .409. Before winning Bronze in the Olympics, Morris was the hero of the 1996 College World Series. He had missed two months of the season and was batting ninth in the order for LSU after breaking his hamate bone early in the season. The Junior would come to the plate in the bottom of the ninth against Miami with two outs, a man on third, and his team trailing by a run (which was knocked in by future Red Sox Skipper Alex Cora). Morris swung at the first pitch curve ball, hoping to make solid contact and keep the line moving, but the ball kept carrying and sailed over the fence for a dramatic walk off win. 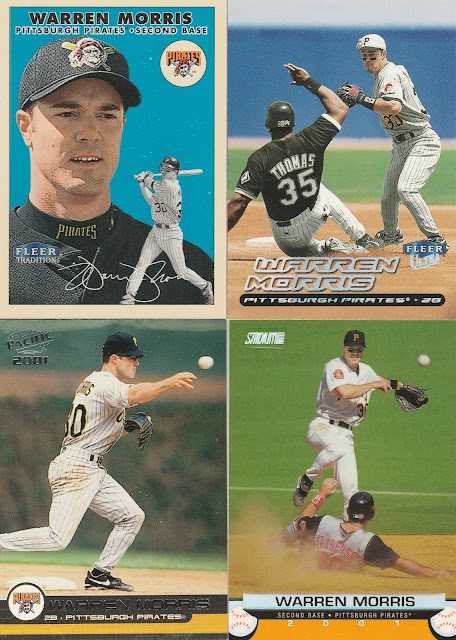 Morris' rookie season with Pittsburgh would be his best in the big leagues. After hitting 15 homers in his rookie year, he'd hit just 3 in 2000. Much was made of his slugging ability in his previous stops in College and the Olympics, and he also had 19 homers and 103 RBI in 1998 for the Rangers and Pirates' AA affiliates. He had a 5 hit game in June of 2000, and a 4 hit game in September, but he wasn't able to translate that to consistent success at the big league level. While he had a career high 31 doubles in 2000, the rest of his offensive stats dipped and the sophomore slump was enough for the Pirates to move on from Morris to former Twin Pat Meares at second in 2001. He would split the 2001 season between AAA and the Pirates, and hit well in the minors, with a .305 average and an OPS over .800, which made him an intriguing option for several teams the following year. 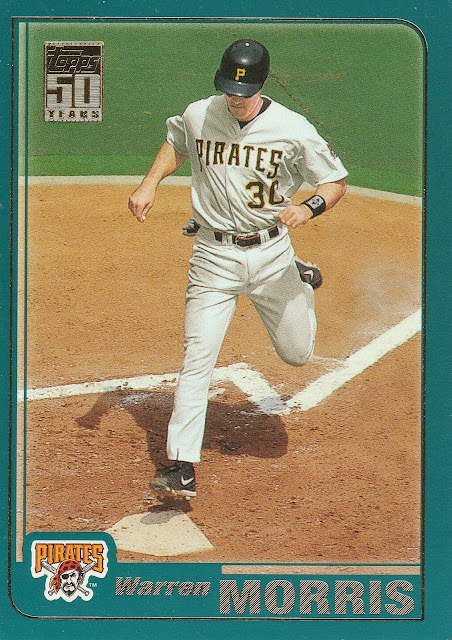 In 2002, the Minnesota Twins picked up Morris after being released by the Pirates, but he was used by the Twins in just 4 big league games. In June, he was traded from the Twins' AAA affiliate to the Cardinals minor league system, and by the end of the season had found his way to Pawtucket via waivers, now playing for Boston's AAA affiliate. He played well enough to pique the interest of the Detroit Tigers, who gave him the everyday 2B job for the 2003 season. He was still a sneaky power bat at the bottom of the order, and had developed into a very good defensive second baseman. He was helped along the way under the wing of Bill Mazeroski, whose tutelage helped Morris to lead the NL in Range Factor for 2B in 2000. For Detroit, Morris appeared in 97 games and added another 6 homers to his career totals. In 2004, he spent the entire season in AAA Toledo, again showing signs of a decent bat and a slick glove. Both Cleveland and Milwaukee gave him a look in the minors in 2005, but Morris decided to call it a career at that point. He returned home to Alexandria, LA to his wife and infant twin daughters and took a job with a local bank, where he's been employed ever since. His degree from LSU is in Zoology- Geaux Tigers!
Posted by Brian at 8:50 PM