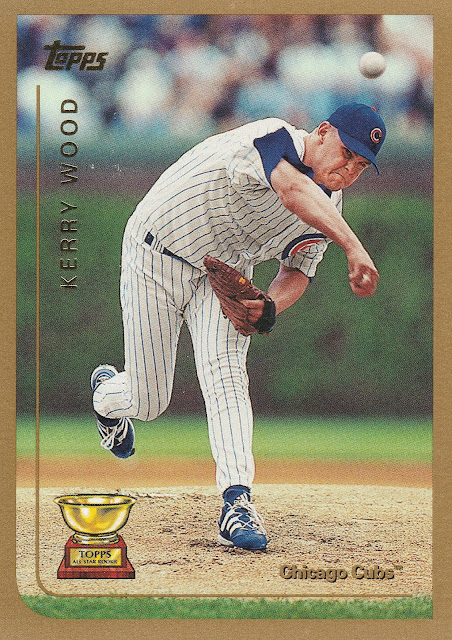 If you see this from the batter's box, you are in for a long day. Kerry Wood in 1998 was the NL Rookie of the Year, so of course he was Topps' first choice for right handed pitcher on their All-Star Rookie Squad. That season, Wood piled up the strikeouts (the most by a Chicago Cub since Hall of Famer Fergie Jenkins in the 1970s), and won 13 games. He had one Complete Game,  which was a shutout, but we'll talk about that game in a bit. 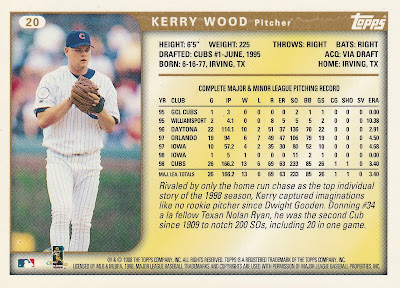 Topps went as far as to say that Kerry's rookie campaign was comparable to Dwight Gooden's phenomenal debut season, and the story of Kerry's season was second only to his teammate Sammy Sosa's chase with Mark McGwire to un-seat Roger Maris as the single season Home Run King. He led the NL in H/9 and K/9, but his electric stuff could be a little tough to harness at times. His 85 walks ranked in the top ten in the NL that year as well as hitting 11 batters and uncorking 6 wild pitches. Sometimes a little wildness can go a long way towards baffling the opposing batters. 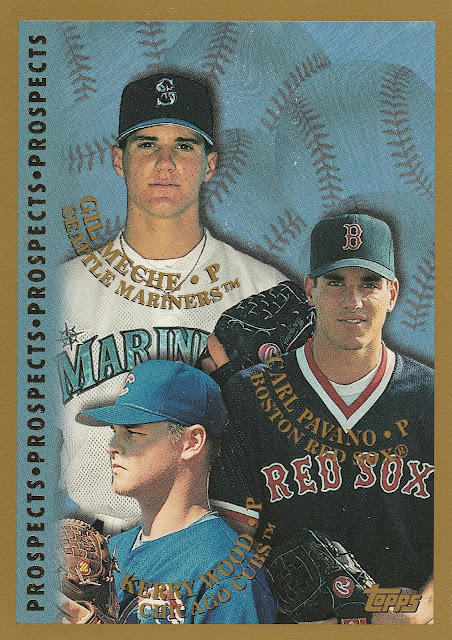 The Cubs made Kerry a first round pick in 1995, selecting him out of high school in Grand Prairie, TX. Wood would start to show signs of the pitcher he'd grown into as a senior, when he fanned 152 batters in a little over 80 innings. He had a 0.77 ERA and was a perfect 14-0. His first full professional season came at the age of 19 for the High-A Daytona Cubs. He went 10-2 with a 2.91 ERA, striking out 136 batters in 114.1 innings pitched. The Cubs were willing to take the good with the bad, as the walks piled up alongside the Ks throughout his minor league career. In 1997 with the Orlando Rays and Iowa Cubs, he allowed a combined 131 walks in 151.2 innings. Despite the wildness, Wood returned in 1998 with a mission to make the big league roster. He would make just one start at AAA, striking out 11 of the 17 batters he faced before being called up to the Cubs. 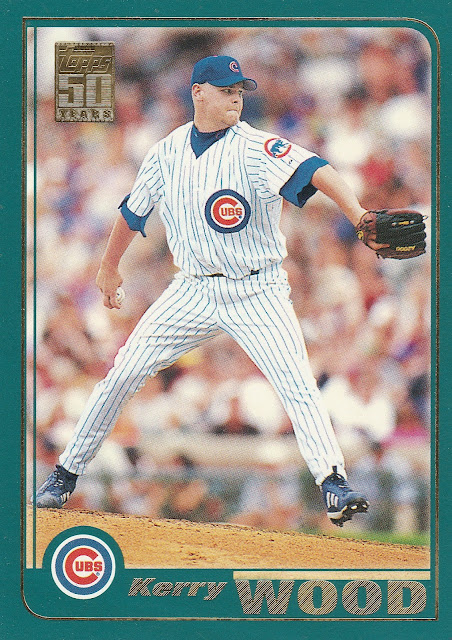 Wood's magical rookie season was curtailed by "elbow soreness" that kept him out of the rotation for the final month of the season. He'd return to make a start against Atlanta in the NLDS, taking the loss after allowing a single run over 5 innings. In Spring Training of 1999, Wood tore his UCL, nearly ending his career. A season of rehab and recovery was needed to get him back on the mound and he was able to rebound to have several excellent seasons in the Cubs' starting rotation. 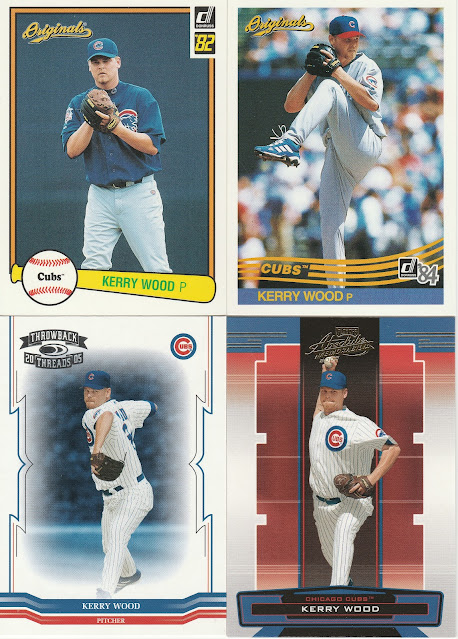 From 2001 - 2003, Wood averaged 200 innings pitched with 700 Strikeouts and an ERA+ of 122. He pitched a gem similar to his rookie season masterpiece (which we'll get to in a bit), when he tossed a 1 hit, 14K shutout against the Brewers in May of 2001. Along with Mark Prior, Wood formed a fearsome 1-2 punch at the top of the Cubs' Rotation and helped propel the team to within one game of the World Series. Wood was the starter of Game 7 of the 2003 NLCS against the Marlins, and even hit a home run to try to help his own cause, but the curse of the Billy Goat was still lurking in the shadows of the Friendly Confines. The Cubs would lose an ugly 9-6 game to the Marlins, and the following season the injury bug would bite Wood again. He would miss nearly 2 months of the 2004 campaign with a strained triceps muscle. 2005 ended prematurely with an injury in August, and 2006 and 2007 were nearly lost completely due to knee injuries and then a torn rotator cuff.
Wood made the decision to shift from the rotation to the bullpen, and in 2008, he made a big splash, saving 34 games for the Cubs and striking out 84 batters in 64.1 innings. 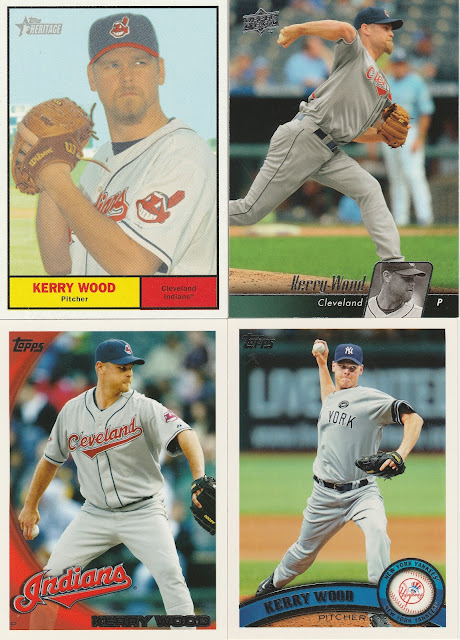 Following the 2008 season,  the Cubs opted not to sign Wood and he tested the free agent waters, landing in Cleveland. He would serve as the closer again, saving 20 games and sporting a league average ERA+ of exactly 100. He was traded at the 2010 trading deadline to the Yankees, where he pitched in middle relief setting up Mariano Rivera. He was his old electric self again with New York, recording a 0.69 ERA over 24 appearances. He allowed just 2 runs over 26 innings, striking out 31 batters down the stretch. In the Post-Season he allowed 2 more runs, 1 to the Twins and 1 to the Rangers, but overall pitched very well. 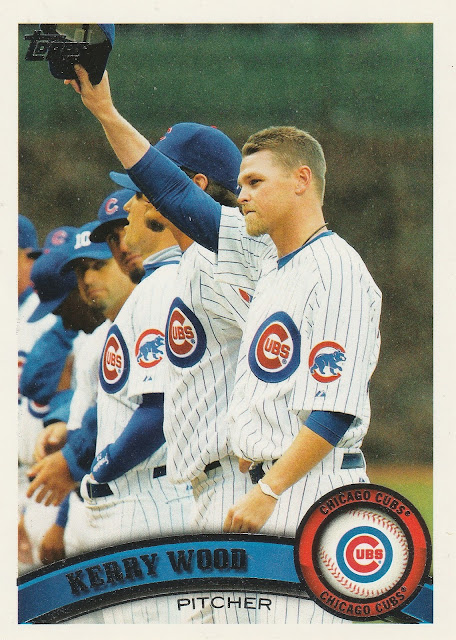 Wood returned to the North Side in 2011, and pitched the final two years of his career in the Cubs' bullpen. He's 3rd All-Time in strikeouts for the Cubs, even though he's 28th in innings pitched. 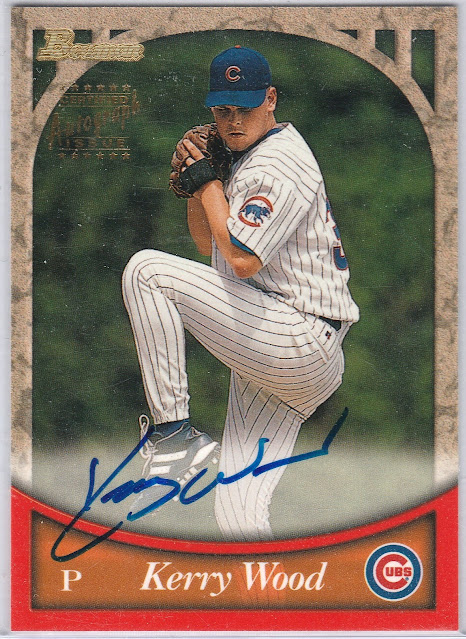 Of course his signature moment came in his rookie season. Wood fanned 20 Astros in just his 5th career start. There are many tributes written about this game, but here are a few of my favorite tidbits:
-Out of 122 pitches thrown, only 7 were hit into fair territory.
-Only 3 of those made it out of the infield.
-The lone hit he surrendered was an infield single that kicked off the glove of 3B Kevin Orie. Arguably it could have been ruled an error.
-The very first pitch of the game was a wild fastball that bounced off the mask of home plate umpire Jerry Meals.
-Houston's Shane Reynolds actually pitched a great game himself, striking out 10 and allowing just one earned run over 8 innings.
It has been argued that this was the greatest game ever pitched - even though he allowed a hit and also hit Craig Biggio (then again, who hasn't hit Biggio?). Bill James developed a formula to grade starting pitchers which is widely used and called the Game Score.
Kerry Wood's game score for this outing was 105, the highest score of any pitched game before or since.
Compare that to Clemens in 1986, his 20K game had a game score of 96.
Clemens in 1996, his 20K shutout had a game score of 97.
Don Larsen's Perfect Game in the 1956 World Series? His Game Score was 94.
Sandy Koufax threw a perfect game in Sept of 1965 with 14 Ks - that game score was 101.
Posted by Brian at 9:28 PM