Here they are - the second class of the Topps All-Star Rookie Team, selected "by the Youth of America" following the 1960 season and featured in the 1961 Topps set.

I have completed the run of these up through 2015, at least all regular issue cards that bear the All-Star Rookie Trophy. You'll see the first example of an omitted player on this page. 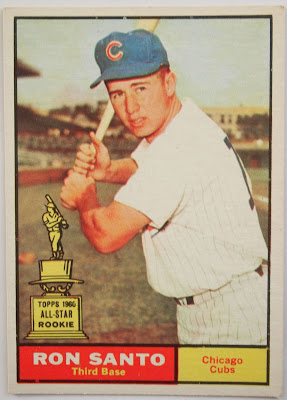 Third Base - Ron Santo
Rookie Card - Hall of Famer
Playing in a dead ball era at an underappreciated corner of the infield, Ron Santo was an excellent fielder and a formidable bat at the heart of the Cubs order. A nine time All-Star and a five time Gold Glover, Santo played his entire career in Chicago. Despite being diagnosed with diabetes at the age of 18, Santo excelled at the demanding position of 3rd Base for 14 years. It took too long, but Santo was finally enshrined in baseball's National Hall of Fame in 2012. His Number 10 was retired by the Cubs in 2003. 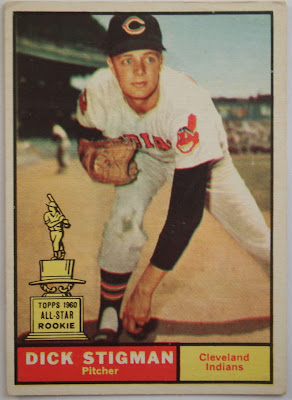 Left Handed Pitcher - Dick Stigman
Stigman made the AL All-Star Team in his rookie season, and won 15 games a few years later for his new hometown team, the Minnesota Twins. Stigman has the distinction of having the record for the most consecutive starts without a decision (ten), which he achieved over the course of two seasons. Stigman's rookie card was in the 1959 Topps set. 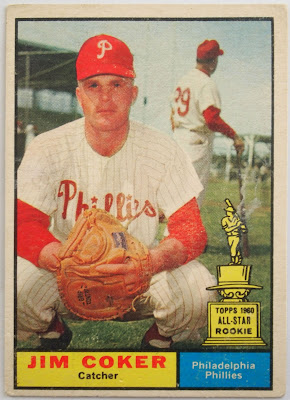 Catcher - Jim Coker
Coker made the 1960 All-Star Rookie Squad despite managing to hit just .214 in 81 games. That was a career high for the journeyman, who also spent time in Baltimore, San Francisco, and Cincinnati. Coker retired after playing a backup role for parts of nine seasons, and became a rancher in Texas after his playing days were over. There wasn't a standout rookie at the catcher position in 1960, though Earl Battey had a breakout season with the Washington Senators in his first full season, winning his first Gold Glove and slugging 15 homers. He was not a rookie at that point, however, so was not eligible for the Topps team. Jim Coker's rookie card can be found in the 1960 Topps set. 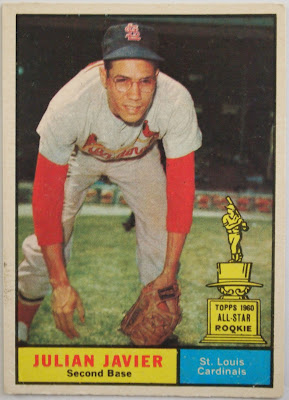 Second Base - Julian Javier
Rookie Card
Javier was a mainstay in the Saint Louis infield throughout the 1960s. He made two All-Star teams (1963 & 1968), and finished his career with over 1,450 base hits. He was a free swinger, never walking more than 47 times in a single season, despite topping 500 plate appearances 5 different times. Javier was a big part of the 1967 World Series winning squad, hitting .360 for the series, including a home run in the deciding seventh game. Javier nearly missed out on making a mark in the big leagues, as he was originally signed by the Pittsburgh Pirates, and was stuck behind Bill Mazeroski on the team's depth chart. Javier was one of the first Dominican born players to excel in the majors, and later managed the country's National Team. 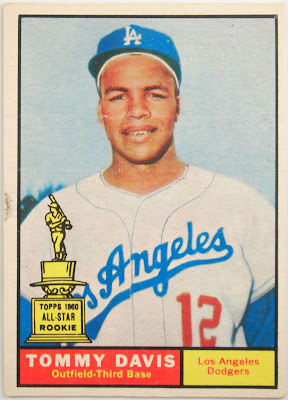 Outfield - Tommy Davis
If Jimmie Coker was a "Journeyman," he had nothing on Tommy Davis. Tommy played for 10 different teams over 18 seasons. Davis was a Seattle Pilot in 1969, and saw playing time in 1,999 career games. His 1962 Season was one for the ages. He led the National League in Hits, Runs Batted In (Thank you Maury Wills), and batting average. The following season, he was a World Champion with the Dodgers. Davis was also the Baltimore Orioles' first full time DH. Tommy's Rookie Card was in the 1960 set. 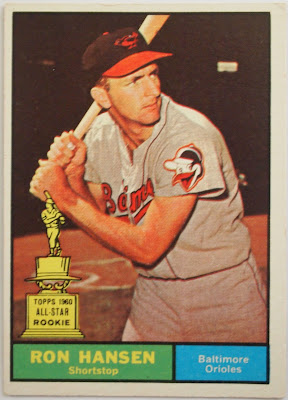 Shortstop - Ron Hansen
AL Rookie of the Year in 1960, Ron Hansen is the first of three Orioles to be named on the 1960 Topps All-Star Rookie squad. That will become a trend over time, some teams feature a disproportionate number of players in a given season. Expansion teams often get a lot of attention by Topps and "the Youth of America." Hansen clubbed 22 Homers in his rookie season, a career high. Hansen also made his only All-Star team in his rookie season as well. Over the course of his career, Hansen played for several teams. His 7 years with the White Sox featured excellent defense and a dependable bat. Ron Hansen's Rookie Card was in the 1959 Set. 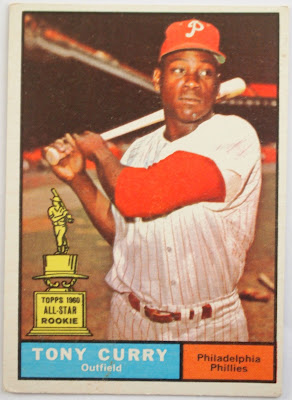 Outfield - Tony Curry
The second player from the Bahamas to play in the Major Leagues, Tony Curry's nod on the Topps All-Star team seemed to be very much based on potential. Curry played for 6 seasons in the majors, but never became the star he was touted to become. The 1961 pre-season started with a strange contract situation. Curry was asked to sign a contract before spring training for below the league minimum. The Phillies claimed that Curry was less than a major league caliber talent, but the fact remained that he felt he was being treated unfairly and returned to the Bahamas before the start of the '61 season with the intention of quitting the game. He was persuaded to return to the team, but struggled to hit lefties. Curry bounced between several teams in the Majors, Minors, and beyond - finishing his career in Mexico. His rookie card is in the 1960 Topps Set. 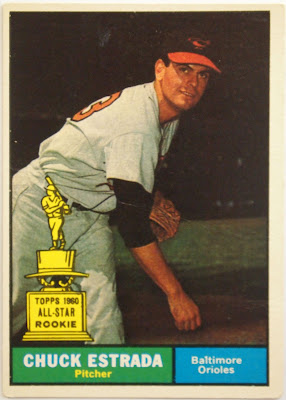 Right Handed Pitcher - Chuck Estrada
Estrada had a phenomenal 1960 season, leading the AL with 18 Wins. He made the All-Star team and was named Pitcher of the Year for the Sporting News. Estrada was effectively wild his rookie year, but the wildness followed him in his sophomore campaign, finishing with 17 losses. Elbow issues derailed a promising career, and Estrada became a coach for several teams in the 70s and 80s.  Estrada's Rookie Card is in the 1960 set. 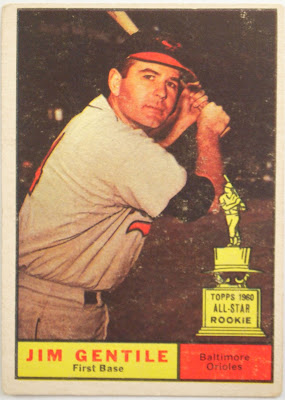 First Base - Jim Gentile
"Diamond Jim" Had a very impressive run to start his career, including a brilliant second season in 1961, hitting 46 Homers and knocking in 141 runs. Gentile made three straight All-Star Games from 1960-1962. By 1966, Gentile's numbers had fallen off and he no longer played in the Majors. He did play for a season in Japan in 1969. Gentile's Rookie Card was in the 1960 set.

Hey.... wait a minute. There should be one more outfielder! Topps, what happened? 1960 NL Rookie of the Year Frank Howard doesn't have a trophy on his card... so, it's not part of this collection. HARSH, I know,  but them's the arbitrary rules.
Posted by Brian at 7:30 AM