Page 9 - At The Bat Rack Frankenset 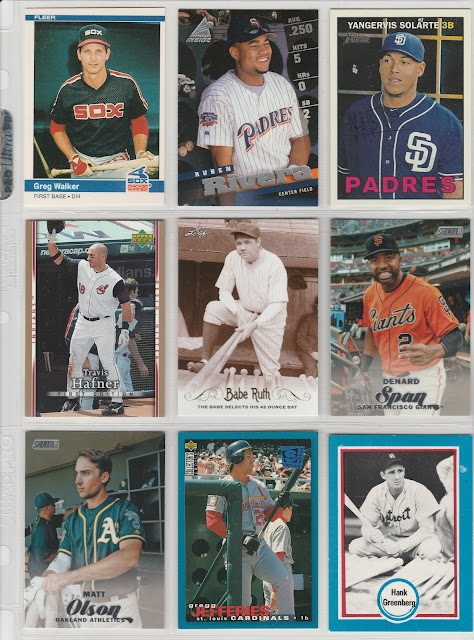 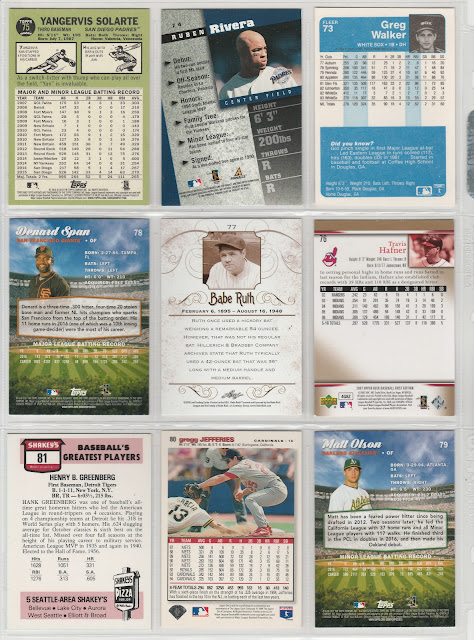 73 - Greg Walker 1984 Fleer
74 - Ruben Rivera 1998 Pinnacle Inside
75 - Yangervis Solarte 2016 Topps Heritage
76 - Travis Hafner 2007 Upper Deck First Edition
77 - Babe Ruth 2016 Leaf Babe Ruth
78 - Denard Span 2017 Stadium Club
79 - Matt Olsen 2017 Stadium Club
80 - Gregg Jefferies 1995 Collector's Choice SE
81 - Hank Greenberg 1976 Shakey's Pizza Baseball's Greatest Players
Well, this page needs a little work - Greg Walker is in the dugout with a bat leaning on the bench, so it's a bit of a stretch to call it a bat rack card. Yangervis Solarte is blocking the bats with his body, and Denard Span is on the opposite side of the dugout from the bat rack (though you can at least see it in the distance). Would like to find an alternate for the Span card mostly because there are two cards from 2017 Stadium Club on the same page.
The Hank Greenberg is my favorite on this page, just because it's fun to root for the oddball card sets.
Posted by Brian at 3:54 PM