Here they are - the Topps All-Star Rookie Team, selected "by the Youth of America" following the 1972 season and featured in the 1973 Topps set.

I have completed the run of these up through 2017 Series One, at least all regular issue cards that bear the All-Star Rookie Trophy.

This was the start of a terrible phenomenon - Topps no longer cared about recognizing the Topps Rookie All-Star squad in a consistent manner. Missing trophies this year are 1B Tom Hutton of Philadelphia, OF Don Baylor of Baltimore, OF Garry Maddox of San Francisco, and Right Handed Pitcher Dick Tidrow. 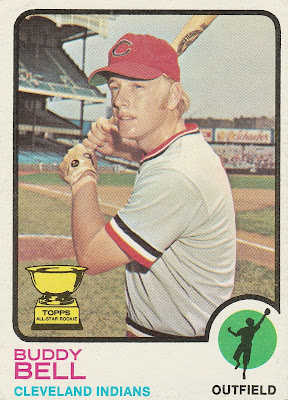 David Gus "Buddy" Bell is the meat of the Bell Baseball Family sandwich. His father, Gus, was a 4-time All-Star outfielder for 14 years in the majors, playing for Pittsburgh, Cincinnati, the Mets, and the Braves. Buddy's sons, David and Mike, also played in the majors. David and Gus are the only Grandpa/Grandson combo to both hit for the cycle in MLB history. But back to the man of the hour, Buddy Bell. A recent article in The Sporting News compares him to Adrian Beltre. While Bell can't match Beltre's longevity and counting stats, he did make a case for himself as one of the most underrated third basemen in Baseball history. He had over 2500 career hits, 6 Gold Gloves, and 5 All-Star selections. Bell never played a single postseason game, which certainly counted against his Hall of Fame credentials.
His rookie season in Cleveland was the only year he played the outfield, and he was a little below league average (an OPS+ of 97), hitting 21 doubles and 9 homers. He moved to third in his sophomore season, and really took off. His best season was in 1979 with the Texas Rangers, hitting a career high 200 hits, 42 of them two-baggers. After his playing days, he managed several clubs. He was tasked with replacing Sparky Anderson in Detroit, and Jim Leyland in Colorado. His teams only had a winning record once in 9 seasons, finishing with a career winning percentage of .418. He is currently the VP and Assistant General Manager of the Chicago White Sox. 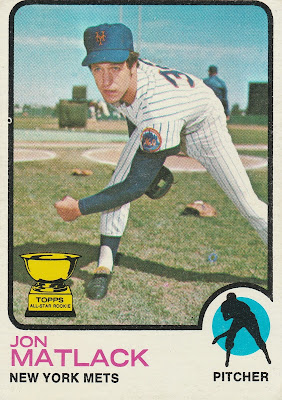 Left Handed Pitcher - Jon Matlack
Speaking of underrated players, Jon Matlack's SABR biography starts with the statement that he is the most underappreciated hurler in New York Mets' history. When surrounded by Tom Seaver and Jerry Koosman, it's easy to overlook Matlack, even though he was the tallest of the 3. His career pitching record of 125 wins and 126 losses doesn't thrill anyone, but looking closer his record obscured his talent. Take the 1974 season. He finished with a 13-15 record, but led the league with 7 shutouts. His ERA+ was 149, his ERA was 2.41, his FIP was a league leading 2.42 and he fanned 195 batters. The 1974 NL Cy Young Winner was super reliever Mike Marshall of the Dodgers. Marshall was slightly behind Matlack in ERA, FIP, Strikeouts, and was well behind in ERA+. Marshall did appear in over 100 games, and led the league in saves while have a tremendous season. The point is that Matlack did not receive a single Cy Young vote, largely due to the ugly 13-15 record. Even though it was the highest of all National League pitchers, Matlack's 9.1 WAR for the season was not considered (why would it, though, in 1974?). Matlack could have become a household name if he had a little bit more run support.
In 1972 he was the Rookie of the Year in the National League, maybe he used up all his media attention in his first year. He won 15 games including 4 shutouts, striking out 169 batters with a low ERA of 2.32.
Jon's Rookie Card is in the 1971 Topps set - he shares card #648 with Ted Martinez and Rich Folkers 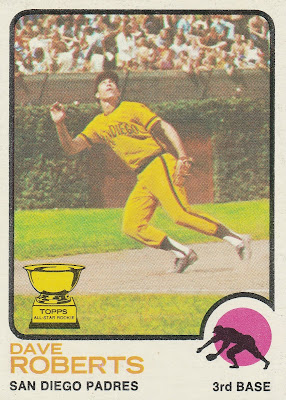 Third Baseman - Dave Roberts
Rookie Card
After a pair of underrated players, we come to one that never lived up to the hype placed upon him. Dave Roberts, not to be confused with 70's Pirates outfielder Dave Roberts, 70's Padres/Astros Pitcher Dave Roberts, or current Dodger Manager and former MLB outfielder Dave Roberts - THIS Dave Roberts was the first overall draft pick in June of 1972. Just days after being drafted, Roberts was in uniform for San Diego. Inserted into the game against the Pirates in the 12th inning of a scoreless tie, he managed to go 0-3 with a pair of strikeouts in an 18 inning marathon. A few days later he got his first start and fared better, going 2-4 with a double. He would become the everyday third baseman for the Friars, appearing in 100 games his rookie season. He was just the 6th major leaguer to jump directly to the big leagues with no minor league experience. He would eventually get 5 years worth of minor league games, including the entire 1976 season. The Padres definitely rushed him to the majors, and his game never really developed.
His rookie year was relatively underwhelming, but the promise of the future was more than enough for the youth of America to select him as the 3B for the Topps Rookie All-Star squad. 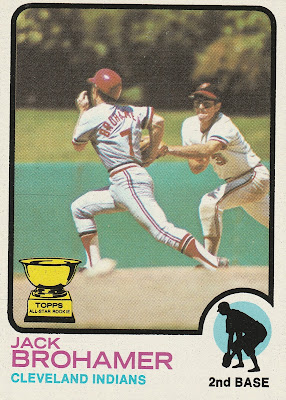 Second Baseman - Jack Brohamer
Rookie Card
Brohamer's rookie season was the high point of his career, playing the most games, getting the most hits, etc. The "short" point of his career came in August of 1976 as a member of the Chicago White Sox. Facing off against lefty Rudy May of Baltimore, Brohamer cracked a two-run homer to right. It was his 7th and final homer of the 1976 season, but it was the only MLB homer ever - by anyone - hit while wearing shorts. The story of the game can be read here, it's a great article.

"Scrappy Jack" managed 123 hits for Cleveland in 1972, splitting time between 2nd and Short. He played in the majors until 1980, spending 9 seasons with Cleveland and both Sox, White and Red. 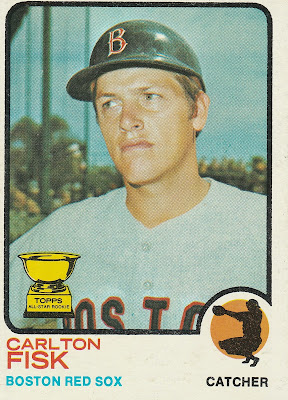 Catcher - Carlton Fisk
Hall of Famer
One of those things you might not have guessed about Carlton Fisk, if you weren't around to see him play as a rookie - he won the 1972 AL Rookie of the Year award while leading the league in triples. His home run in the 1975 World Series was a watershed moment in Boston sports history, as well as in the history of televised sports. My own memories of Fisk skew towards the end of his career, shouting at Deion Sanders or just looking like a film version of "aging veteran catcher" for the Chicago White Sox. He retired with the most runs scored, hits, doubles, home runs and most games played by a catcher in Major League history. Fisk played with broken ribs, recovered from major injuries to his knees and a broken forearm early in his career, and served as an example to many of the "right way to play the game." His critics saw his deliberate, slow home run trot as more arrogant than regal, but regardless of anyone's opinion, his numbers ultimately did the talking for him.
As a rookie, in addition to leading the AL in triples, he clubbed 22 homers, made the All-Star team, and won his first -and only- Gold Glove award.
Carlton's Rookie Card is in the 1972 Topps set - he shares card #79 with Cecil Cooper and Mike Garman 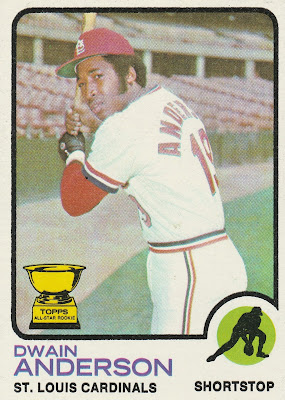 Short Stop - Dwain Anderson
This should be Bobby Grich, not Dwain Anderson... Anderson has 62 career hits over 4 seasons as utility infielder. In 1972, Anderson only played in 60 games (for two different teams... ) and managed just 36 hits. Grich on the other hand, was an All-Star with 123 hits, 12 homers, and a .278 average... What gives, Topps? No offense intended to Mr. Anderson, the Oakland native was considered a top prospect in the A's system and was known for solid defense at short. I just don't see what was remarkable about his 1972 season that made him stand out compared to other rookies that year. Grich, Derrel Thomas, Steve Brye.... Any of those guys would've made more sense to me!
Dwain's Rookie Card is in the 1972 Topps set - he shares card #268 with Chris Floethe
Posted by Brian at 3:41 PM