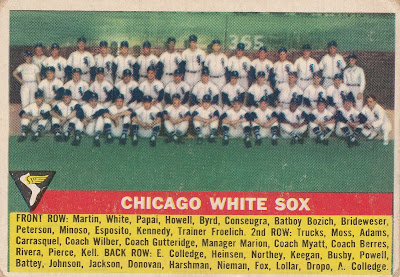 One of the fun things about a completed set is deciding how you want to organize it. I have the 1956 Topps set in a binder, sorted by team, in the same order that the teams finished in the 1955 Standings. In 1955, the Chicago White Sox finished in 3rd place in the American League with an 91-63 record. 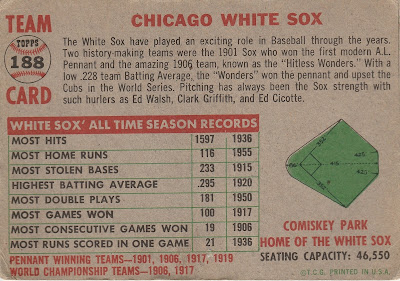 1955 was the year Mayor Daley first took office in Chicago. On Michigan Ave, a young man recorded a song called "Roll Over Beethoven" for Chess Records, to be released on an unprepared public the next year.

The Chicago White Sox were a formidable team, but found themselves stuck in 2nd gear for the bulk of the 1950s. They would win over 94 games in 1954 and 91 in 1955, but could not finish higher than 3rd place in the AL. In 1955, the White Sox had a well-balanced attack with power, speed, defense, and good to great pitching. They would continue to nips at the heels of the Yankees until finally tripping them up in 1959. 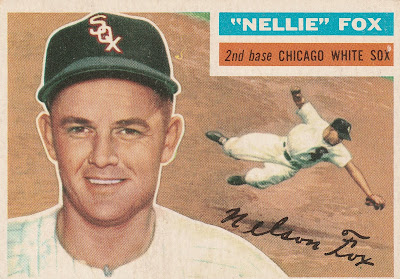 The White Sox best position player was their franchise 2nd baseman, Hall of Famer Nellie Fox. From 1952 to 1962, Fox would play in at least 150 games. His 1955 season included a league high 154 Games, also leading the league in at bats and in times hit by pitch. Fox was the only member of the White Sox to score 100 runs in 1955. 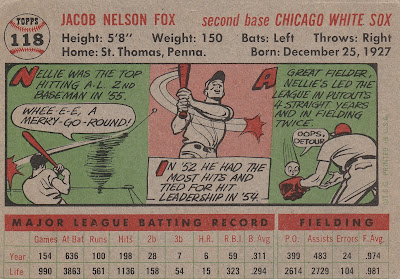 Fox led the AL in hits 4 times, and was the 1959 AL MVP for leading the Sox to the pennant. The 15 time All-Star also would win 3 Gold Gloves. He was elected to the Hall of Fame in 1997 by the Veteran's Committee. 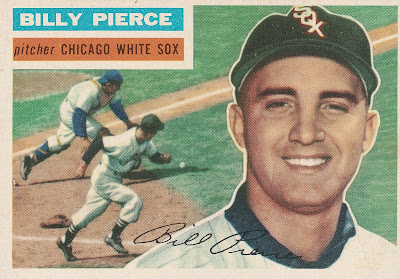 The White Sox Ace in 1955, Billy Pierce, was their best pitcher for the season, and arguably their best pitcher for the entire decade of the 50s. In 1955, Pierce led the AL with a 1.95 ERA, and had a ridiculous 200 ERA+ (100 is league average). He tossed 6 shutouts and had the league's best FIP, WHIP, and K/BB ratio. He had a 15-10 record for the season, but pitched better than his record indicated. 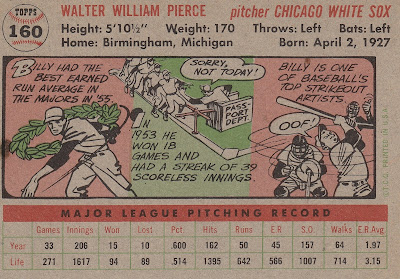 Pierce followed up 1955 with 2 straight 20 win seasons, and was a solid veteran presence on the Sox '59 squad. Pierce did not get a start in the series, as Manager Al Lopez was determined to have the Dodgers face right handed starters. Pierce would appear in 3 of the games in relief, and allowed 2 hits and no runs for the series. Pierce would find a late career rebirth in San Francisco, again reaching the World Series in 1962. He pitched in 4 world Series Games, winning game 6 with a complete game 3-hitter, but the Giants still fell in seven games to the Yankees. For his career, Pierce won 211 games, struck out 1,999 batters, and had 38 career shutouts. 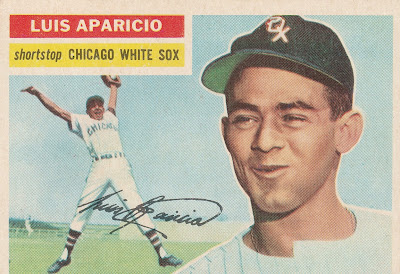 It was tough to pick the third card to feature, as you'll see in a moment, so I went with the Rookie, future Hall of Fame shortstop Luis Aparicio. Luis was in the minor leagues for the 1955 season, but was tearing up the basepaths and catching everything in his area code at short. 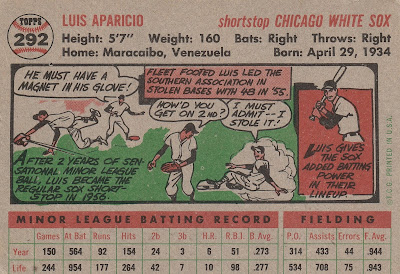 Pairing Aparicio with Fox gave the team a stout defensive lineup up the middle. Both sterling defenders could also run well on the bases, with Aparicio ranking 38th All-Time in stolen bases with 506 for his career. Aparicio led the AL in steals every season from his rookie year of 1956 until 1965. He was the 1956 Rookie of the Year, thanks to his speed and defense, with only Rocky Colavito and Tito Francona receiving votes. He was just a .262 career hitter, however he averaged nearly 170 hits and 20+ doubles per season to go with his great defense. 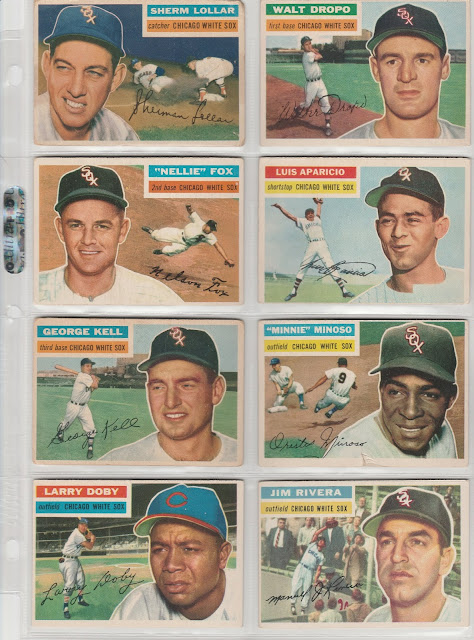 See what I mean about a tough choice? There were 4 Hall of Famers among the Sox regulars in the 1956 set, with Fox and Aparicio up the middle, George Kell at the hot corner, and newly acquired outfielder Larry Doby. Kell led the White Sox with a 119 OPS+ in 1955, though Fox had a much higher WAR when his defense and base stealing is taken into account. Larry Doby would make his first year away from Cleveland a good one-- he would drive in 102 runs and crush 24 homers in 1956. Minnie Miñoso had a slightly below average (for him) season in 1955, but would return to form in 56 with his average climbing again above the .300 mark and leading the league in Triples for the 3rd time. Don't sleep on "Jungle Jim" Rivera, either, who hit 10 homers and provided daring and acrobatic catches in the outfield. 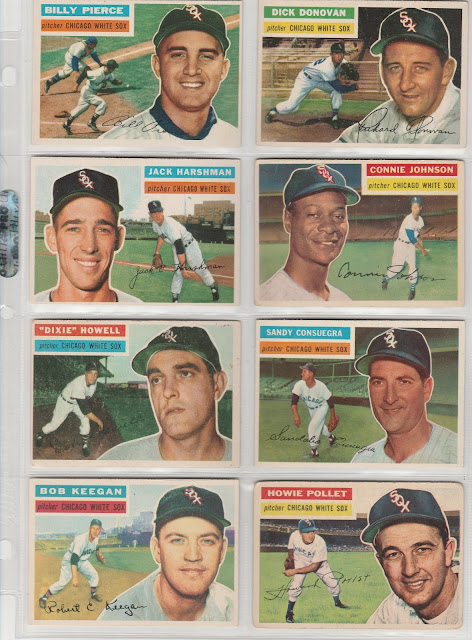 The pitching was solid as well. In addition to Pierce, Donovan, Harshman, and Johnson all had better than league average years. Donovan matched Pierce with 15 victories and also had 5 shutouts. In the bullpen, Sandy Conseguera was the standout, with a 2.64 ERA over 126 innings. Dixie Howell was the team's closer, notching 9 saves while going 8-3 with a 2.93 ERA. 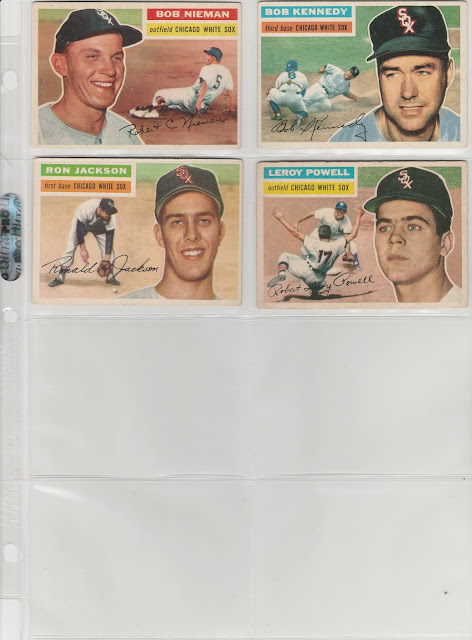 Bob Nieman provided some pop with 11 homers off the bench, Bob Kennedy had 9 homers of his own and hit .304 in limited duty. Jackson and Powell were 21 year old rookies. Powell appeared in only 2 major league games in his career- one in '55 and one in '57 and never made a plate appearance. He did score a run in the 1957 game however, pinch running for a pinch hitter for the game's starter Dick Donovan in the 2nd inning!

The White Sox were a sleeping giant in 1955, building a foundation with Fox, Aparicio, and Pierce to Go-Go to the World Series in 1959.
Posted by Brian at 5:33 PM