The Curves of Annabel Lee 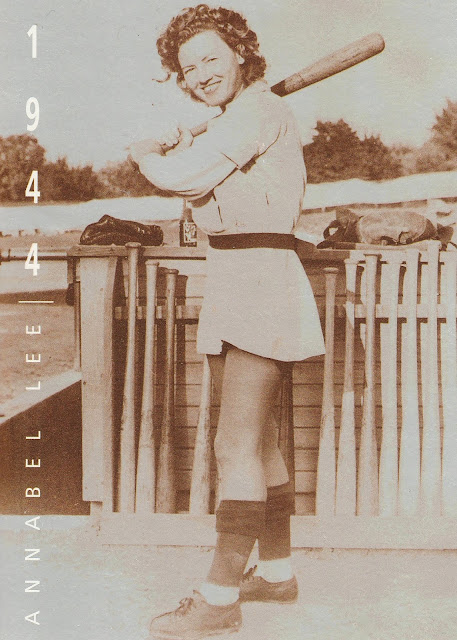 Get your minds out of the gutter. I´m referring of course to the Curveball thrown by Minneapolis Millerettes´ lefty ace, Annabelle Lee Harmon. The title comes from a poem by K.C. Clapp, who in turn was channeling the memory of Edgar Allen Poe´s verses, after which our star pitcher is named. When you finish this post, or hey, even right now if you like, click over to this post by Sue Macy about Annabelle which includes the poem at the end.

In the history of the AAGBL, there were 5 perfect games thrown. The first of which was thrown by Annabelle Lee, while pitching for the Minneapolis Millerettes. The Millerettes only lasted one season - the league tried an ambitious expansion in all directions from their hub in Chicago. The distance to Minneapolis felt much further in the 40s compared to today. The travel expenses became too much for the franchise to sustain itself. But their one season did include that gem by Annabelle.

She would pitch for 6 seasons in the league, and despite the rules for pitchers changing three times (underhand only, sidearm allowed, overhand allowed), and the size of the ball changing each season, Annabelle still dominated. She tossed a no-hitter in her second season, now with the Fort Wayne Daisies, the team that replaced the Minneapolis franchise. Her ERA was a microscopic 1.56 in 243 innings pitched. Over her career, she pitched to a 2.25 ERA and struck out 281 batters (keeping in mind that early in her career, all pitchers had to throw underhand). Her pitch mix included a fastball, a curveball and a knuckler-- she would continue to demonstrate that pitch well into her seventies. 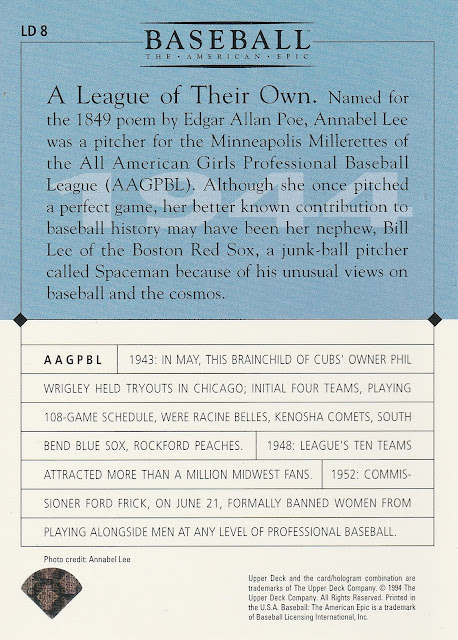 Lee´s father Bill was a member of the PCL Hollywood Stars in the 20s -- and her mother was a local softball star as well. Annabelle would later be a tutor to her ¨Space Cadet" nephew, teaching the younger Bill Lee the finer points of finesse pitching. He would grow into a ¨Spaceman¨ and pitched in the majors for Montréal and Boston. Annabelle would return to Southern California after retiring from baseball, and continued playing softball locally while working for a pair of different electronics companies. A torn rotator cuff while working at the 2nd company in 1985 effectively ended her pitching days and she retired from the game and her electronics career at the same time.