Number One With A (Silver) Bullet 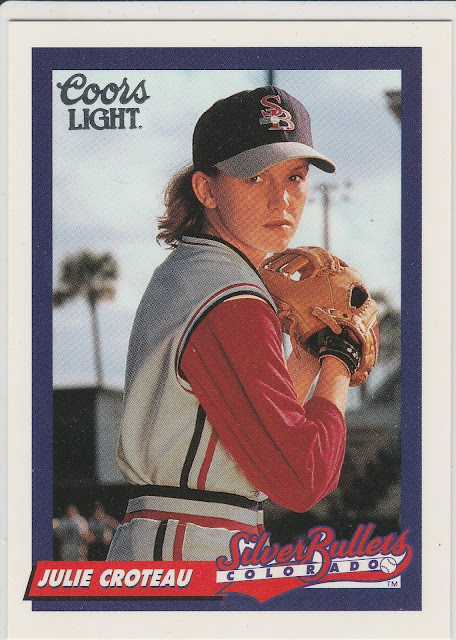 "Those who walk on the well-trodden path always throw stones at those who are showing a new road."

Julie Croteau didn't ask to be at the center of controversy, but she wasn't going shrink from a fight, either. In 1988, Croteau was one of the last cuts from her High School's (all male) baseball team. Julie had tried out for the school's JV team as a Sophomore, making the team in a testament to her perseverance. The coach had suggested she try softball instead, but she would not be persuaded. She had been playing baseball since Little League at the age of 6. As a member of the JV team, Croteau was stuck on the bench for the season. Her Junior year, the JV team did not have a roster spot for her. So when she tried out for the Varsity team as a Senior, there was some amount of ammunition for the coach to say she wasn't ready to play on the varsity team. Despite the fact that Croteau had ample experience outside of the school team, and that the team itself had a terrible record and could have used more quality players, Croteau was not given a chance to prove it against live competition.  Croteau's parents, both experienced lawyers, sued the school for discrimination, citing the landmark Title IX decision. Her would be teammates testified against her, as did her coach, and the judge ruled against her, adding there is no constitutional right to get to first base, a particularly distasteful turn of phrase.

One of the reporters covering the trial was also a coach for the semi-pro Fredericksburg Giants. The team is similar to the Cape Cod League, with pre-college and/or pre-minor league players competing for the attention of College and Pro scouts. While playing for the team, she was admitted to St. Mary's College of Maryland. She was assured that she would be judged on the merits of her playing ability only, and if she made the team, she would be allowed to play. St. Mary's Baseball team is a Division III NCAA program. She made the team, as the backup First Basewoman. Julie's first game was the first by any women to play for a Division III Men's baseball Team. In her first season for St. Mary's, she hit .222. 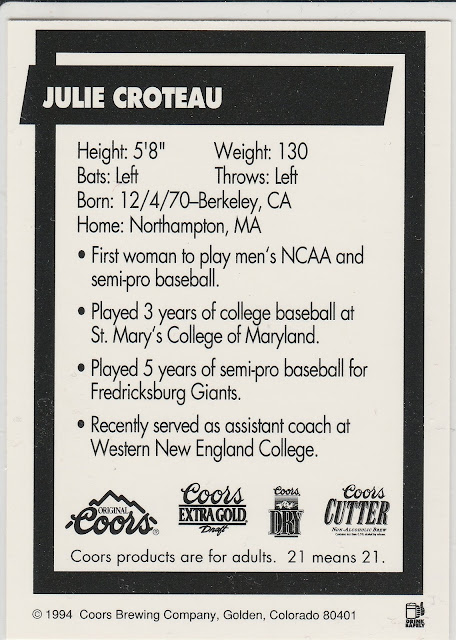 The Colorado Silver Bullets were an all-female franchise that played exhibition games throughout the United States for four seasons. Croteau played in the inaugural season for the team, then played in the MLB sanctioned Hawaiian Winter League for the Maui Stingrays, going 1-12. She continued playing for the Fredericksburg Giants and also started coaching for college teams. In 1995,  she became the first woman to coach for Division I NCAA Baseball Program, at the University of Massachusetts - Amherst. She also led the U.S. Women's National team to Gold Medal in 2006, after serving as the team's 3rd Base coach in a 2004 Gold Medal run.

She currently works at Stanford University as the Director of Communications in the Health Improvement Program of the Medical School.