They Might Be The New York Giants 1956 Topps Team Set 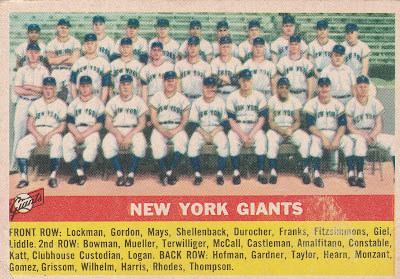 One of the fun things about a completed set is deciding how you want to organize it. I have the 1956 Topps set in a binder, sorted by team, in the same order that the teams finished in the 1955 Standings. In 1955, the New York Giants finished in 3rd place in the National League with an 80-74 record. 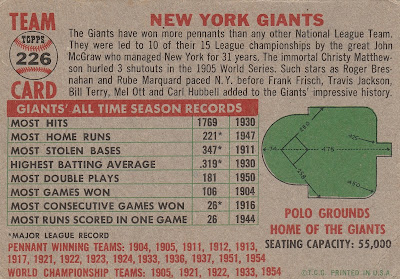 1951 had the "Shot Heard Round the World," 1954 had "The Catch," but all 1955 had was a 3rd place finish and a season ending Triple Play turned against them by the Phillies. The Polo Grounds were literally falling apart, and the team owner Horace Stoneman was looking West to potentially expand Major League Baseball's reach. With a franchise moving from Boston to Milwaukee, Minneapolis seemed like a possible landing spot. The Giants still controlled the minor league Minneapolis Millers, and the region had started plans to build a new major league ready stadium in the suburbs to the south west of the Twin Cities near the new airport. The team's future in Manhattan was now very much in doubt, and if not for a few key players, the Polo Grounds would be a very depressing place to be. 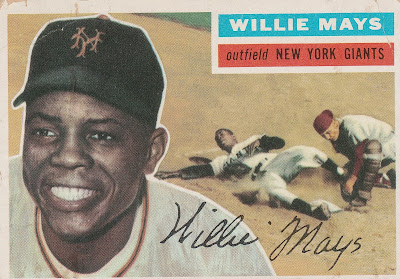 It should be no surprise that the Giants' best hitter in 1955 was Willie Mays. He was now back from military service for a full year, and at age 24 Mays was just hitting his stride. Mays was the National League's leader in triples and home runs in 1955. That's remarkable. With the exception of Stan Musial in 1948, triples hitters are not power hitters-- to lead in both categories in the same season in almost unheard of. He also led the NL in Slugging , OPS, and total bases. He finished 4th in the MVP vote, behind Ernie Banks and a pair of Dodgers. 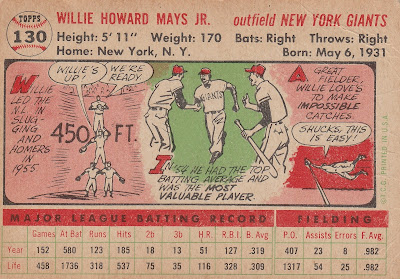 Mays was the MVP in 1954, as the Giants were World Series bound, and somehow Mays only won that award twice in his career. Starting in 1956, Mays led the NL in steals 4 straight seasons. He was very nearly the first 40/40 man, hitting 36 homers in '56 with 40 steals, then 36/38 the next year. The milestone would of course not be reached until 1988 when Jose Canseco did it. Mays finished his career with 660 homers, which was 3rd best in MLB history at the time, and is one of the first players mentioned whenever the discussion of greatest player of all time comes up. He was a 24 time All-Star, won 12 Gold Gloves, hitting for average and power, with great speed and defense. 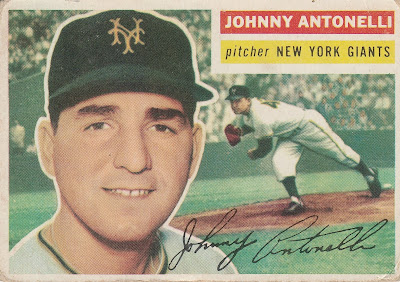 The Giants' pitching in 1955 was suspect, but their best pitcher was southpaw starter, Johnny Antonelli. He won 14 games with a pair of shut outs, and a 3.33 ERA. Antonelli struck out 143 batters in 235 innings. 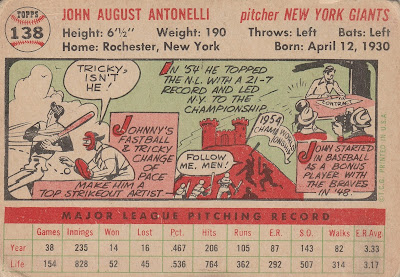 Like much of the Giants team, 1954 had much better results for Antonelli. He won 21 games and led the NL with a 2.30 ERA. He followed the 1955 season with another 20 win season. Over his career, he was a 6 time All-Star, and in the 1954 World Series had a great start and saved a second game. 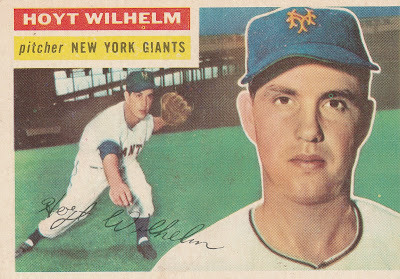 The other Hall of Famer on the squad was knuckball reliever Hoyt Wilhelm. He led the Giants with 59 appearances tossing 103 innings and finishing 14 games in 1955. He was just a shade better than league average, sporting a 104 ERA+. 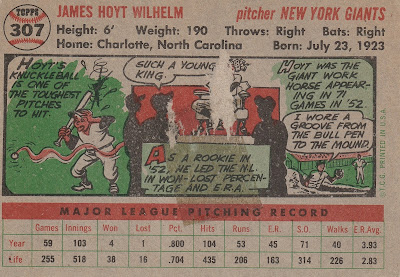 So, this card could probably use an upgrade, there was some tape used on the back at some point in the past. Wilhelm is best known for his Knuckleball and the longevity of his career - but did you know he is one of the rare MLB players to have hit a home run in their first career at bat? The 8 time All-Star pitched for 21 seasons, and he won a pair of ERA titles. 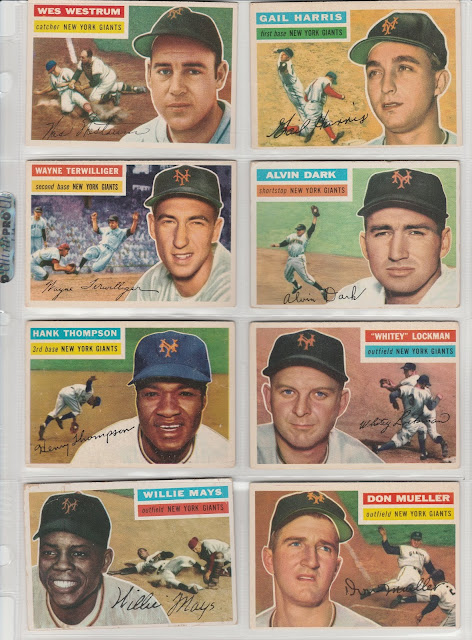 The only other Giant with an OPS+ above 100 was Hank Thompson, who hit just .245 with 17 homers. Don Mueller managed to drive in 83 runs despite only hitting 8 homers,  I suspect it was thanks in no small part to hitting after Willie Mays in the lineup, as Mays scored 123 runs in 1955. Wayne Terwilliger is a personal favorite of mine, he coached for the MN Twins and later the Saint Paul Saints well into his 90s. 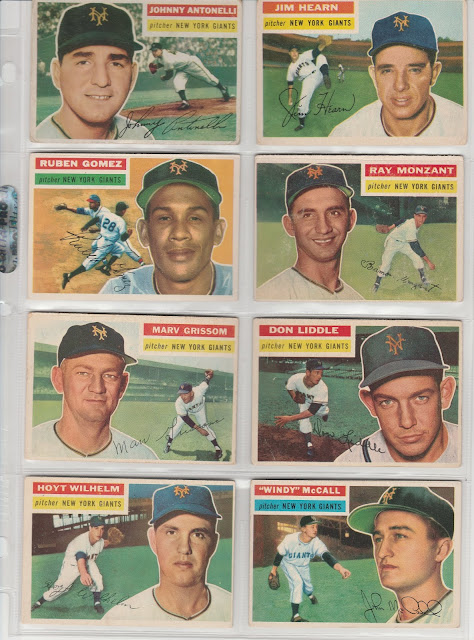 Marv Grissom, the Giants' closer, actually had a very good season out of the bullpen. He saved 8 games, pitching 89 innings with an ERA under 3. Jim Hearn had an identical 14-16 record to Johnny Antonelli, but got there with fewer strikeouts and more walks... 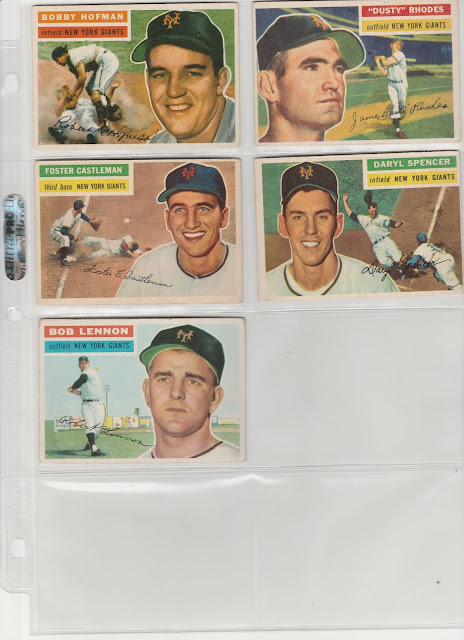 1954 World Series Hero "Dusty" Rhodes was still on the Giants, providing timely pinch hitting and occasional relief in the outfield. Bobby Hofman added 10 homers as a part time infielder. Foster Castleman and Daryl Spencer would be regulars in 1956, which might explain how the Giants dropped to 6th Place in the National League in 1956.