The City of Saint Paul declared March 6th, 1990 as ¨Toni Stone Day¨ in the city and in 1996 dedicated a field in her name near Concordia College on the corner of Griggs Street and Marshall Avenue. 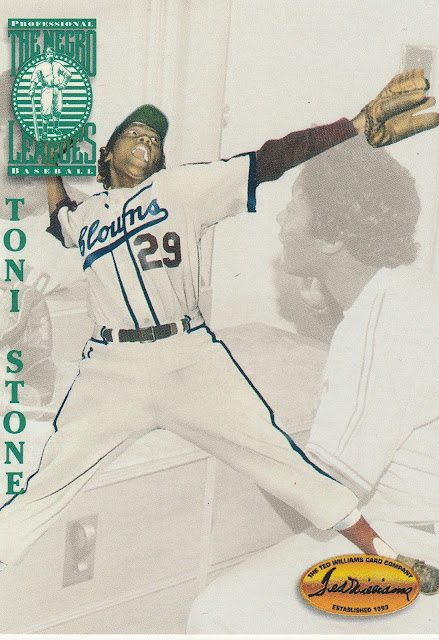 Why name a field after Toni Stone? Marcenia Lyle Stone was born in Bluefield, West Virginia in 1921. When she was 10 years old, her family moved to Saint Paul, MN. She loved baseball and despite attempts by her parents to stop her from playing, she was persistent. The neighborhood kids nicknamed her Tomboy, and when her folks asked a priest to come to the house to talk her out of playing, she ended up joining the boys' team at the priest´s Church. By the age of 15, she was playing on local Girls softball teams and still played baseball on the side. I say ¨on the side" but it was with the semi-pro barnstorming team, the Twin Cities Colored Giants. She was the regular at second base, playing all over the Midwest and in Canada. According to newspaper reports from the time, Stone was also a pitcher for the team. 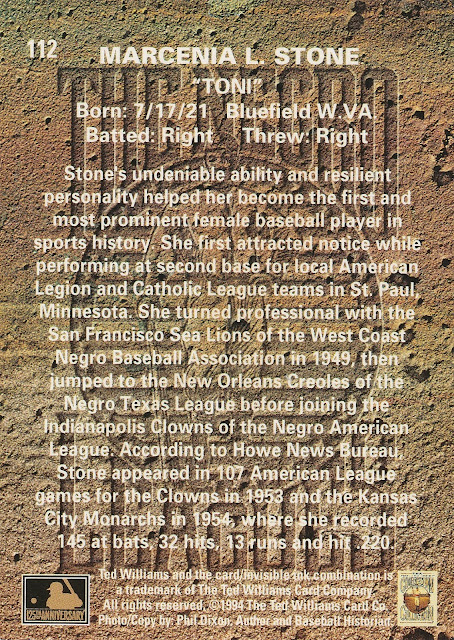 She would go on to play for several local teams in the Twin Cities, and depending on the source, may have gotten a boost from St. Paul Saints Manager Gabby Street, in form of a new pair of cleats and a spot in his baseball academy. I have my doubts about this story, in part because Gabby Street was a KKK Member, but also because there doesn´t seem to be a contemporary version of the account.

She would move to California in the mid 40s to be with her ailing sister, and would continue to play wherever she could find a roster spot. She would marry in 1949, and with the encouragement of her husband (there is some conflicting info on the level of support) she would join the local American Legion team coached by Al Love. Because of the American Legion rules, she claimed to be 17 instead of 27. She would later join up with another semi-pro team, the San Francisco Sea Lions. The Sea Lions were loosely affiliated with the Negro Leagues.  Even though Major League Baseball had integrated with Jackie Robinson in 1947, the all women´s league, the AAGPBL, did not. Toni, as she was now known, didn´t care. Toni was still one of the best players on the men´s team.

Despite a pair of RBI in her first game with San Fran, she didn´t stay long, as the team did not pay her what they promised. She moved on to play in New Orleans for the Creoles, another minor league team. In the spring and summer, Toni would seek opportunities with teams in the Negro Leagues, then return to Oakland after the season ended. Her big break came in 1953 - the Indianapolis Clowns had just lost Hank Aaron to the Braves, and were in need of a replacement at second base. Call it a mix of publicity and skill, but Toni Stone was exactly the player the team was looking for. When she made her debut, she became the first woman to play in men´s professional game.

In her first season with Indianapolis, Stone played in over 50 games. She had to change into her uniform in broom closets, sometimes in the umpire´s dressing room if she was lucky. She would often start games but be pulled early so she could shower without the men in the locker room. With each new team, there would be a period of adjustment when she would endure catcalls and come ons from her teammates, spectators, and opponents - but her play on the field usually brought her teammates around to respect her as a ballplayer above all else. Her batting average in 1953 was .364, good for fourth best in the league.

She was traded to Kansas City before the 1954 season, Indianapolis signed another woman, Connie Morgan to play second base, as well as a pitcher Mamie ¨Peanut¨ Johnson. Toni once again had to play through the derision and disrespect from her own team and the rest of the league, and 1954 would be her last in the Negro Leagues. Following the season, she returned to Oakland. She would continue to play and coach on local semi-pro teams into her sixties.

Black Past Article by Euell Nielson