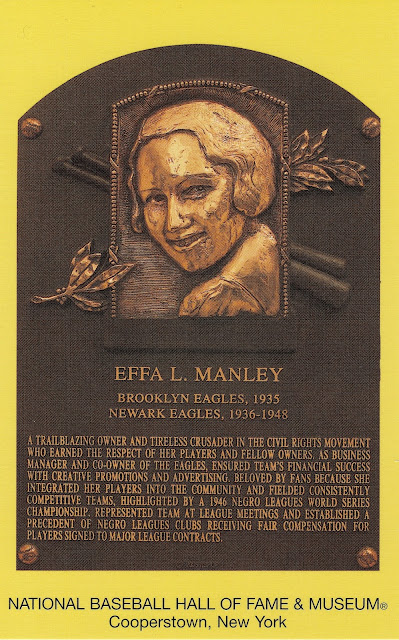 Effa Manley was pissed. The Brooklyn Dodgers had done it again. They signed away Don Newcombe from her Newark Eagles without so much as a ¨thank you ma´am.¨ Branch Rickey had now taken Jackie Robinson from the Monarchs, Roy Campanella from Baltimore, and Don Newcombe with no payment or compensation of any kind. She had already lost Monte Irvin for just $5,000 to the Giants, and knew that it was only a matter of time before the rest of her Championship Team would be playing for MLB organizations, even though none had yet made the final leap to play in the Major Leagues. Larry Doby was a different story. While Bill Veeck writes in Veeck As In Wreck that he offered $10,000 for Doby, with another $10,000 if he made the team, and that Manley was ¨thrilled,¨ she was more resigned to losing Doby, and had been waiting for his call. The day before Veeck called, she was alerted to the fact that Veeck´s scouts had been following Doby in particular ever since Robinson had signed. In a 1977 interview, she explained that she really had no bargaining power in the negotiation, and basically had to take whatever was offered. The total amount paid was $15,000 -- $10,000 up front and $5,000 later when Doby made the minor league team. The last thing she said to him? She made Veeck promise that he would never pay Doby less than $5,000 per year, which is what he would have been making for Newark. The whole 2+ hour interview is posted below and worth a listen. 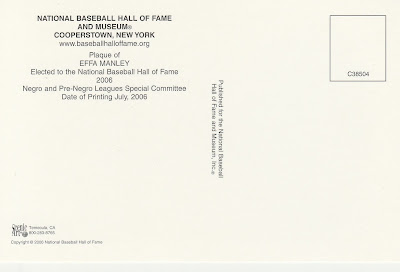 Born in Philadelphia, Effa was raised by her mother, who was white, and her step-father who was black. Her biological father was a white man from New York, all of her siblings were half white/half black. She talks about her childhood being raised ¨as a Negro,¨ and by growing up in a black neighborhood and with a black family she had a unique experience that shaped her world view. Shortly after marrying her husband Abe Manley, she helped lead boycotts in New York of local businesses that refused to employ black workers, and while operating the Newark Eagles, she organized ¨Anti-Lynching Day"at the ballpark in 1939, and became treasurer of the Newark Chapter of the NAACP.

The Newark Eagles were founded by Abe Manley and Effa - with Effa serving as the Chief Financial Officer, lead Spokesperson, and head of Promotions. For her team, Manley did the best she could to provide the best working conditions in the league. Following the 1946 Championship, she and Abe invested in a state-of-the-art team bus, which was the envy of the league. Each player was presented with a diamond championship ring, and throughout their ownership of the Eagles, Abe and Effa made every effort to keep the working conditions of the players at the forefront of their minds.

The team was sold in 1948, for just $15,000, and the new owner moved the team to Houston. Her husband Abe passed away not long after the team was sold. Afterwards, she focused again on the NAACP and moved out to Los Angeles, where she lived for most of the rest of her life. She also co-wrote a book with Leon Herbert Hardwick called Negro Baseball . . . Before Integration. Manley was inducted into the Hall of Fame posthumously in 2006 - and is the only woman inducted the Hall to date.

Full interview with Effa Manley at University of Kentucky, 10/19/1977

SABR Article by Bob Cook
Posted by Brian at 6:00 PM