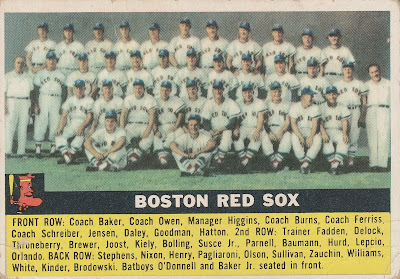 One of the fun things about a completed set is deciding how you want to organize it. I have the 1956 Topps set in a binder, sorted by team, in the same order that the teams finished in the 1955 Standings. In 1955, the Boston Red Sox finished in 4th place in the American League with an 84-70 record. 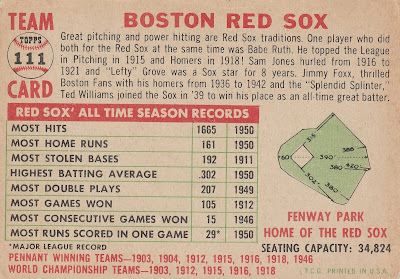 For a team that finished 14 games above .500 in 1955, the Red Sox had some positive momentum heading into 1956. But the fact is that the 1955 season was one filled with anxiety, disappointment, and tragedy that extended well beyond the intimate confines of Fenway Park.


As Curt Gowdy narrates the 1954 season, Ted Williams has returned from military service in Korea. He'd now missed 5 MLB seasons to serving the country, but at 35 years old still had contributions to make to the game. Ten years his junior was the fellow Korean War vet and football hero from Boston University, Harry Agannis. The Lynn, Massachutsetts born son of Greek and Polish immigrants was adored by all of New England. But 1955 would prove to be one of the saddest chapters in Red Sox history. The season started without Ted Williams, who had announced his likely retirement, telling reporters in March his mind was "so filled with other things I can't think of returning to baseball right now." By the time he did decide to come back, the Red Sox were already a dozen games back in the standings. His return came not long before another blow to the team. Harry Agannis suddenly passed away from a pulmonary embolism - a blood clot that form while suffering from complications stemming from a prolonged bout with pneumonia.  His death was a crushing blow to the whole region - for decades afterwards, people would recall where they were when they heard the news. 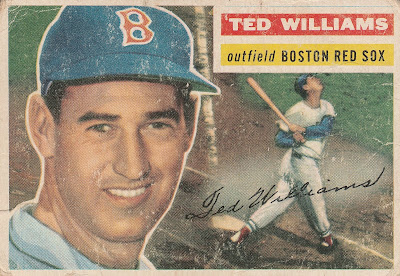 The Red Sox's best hitter was also the American League's best hitter, Baseball's best hitter, and quite possibly the greatest hitter who ever lived. Ted Williams missed the first month of the 1955 season, ostensibly retired, dealing with the conclusion of the legal complications of a divorce from his wife, and re-adjusting again to civilian life. The retirement is now referred to as "strategic" related to his divorce proceedings, and he signed a one year deal to return to Boston on May 13th. He would only play in 98 games in 1955 - but he still led the team in homers, and his .356 average would have led the American League had he reached the minimum required plate appearances. He was named Comeback Player of the Year for 1955 for his un-retirement. 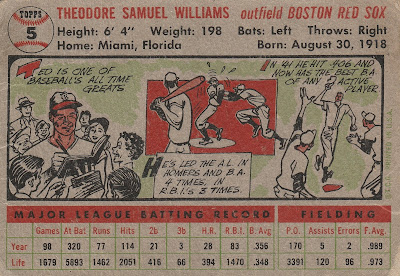 Williams had 6 batting titles, and had he played full seasons in 1954 and 1955 would have had 2 more. He won the Triple Crown (Avg, HR, RBI) twice, was a 19X All-Star, 2X MVP, and is the All-Time leader in On-Base Percentage in MLB history, reaching base at a mind-boggling .482 rate. He was of course a first ballot Hall of Famer,  combine his baseball career with his prowess as a hunter and fisherman, his military service,  and you have an icon of 20th Century American Masculinity. 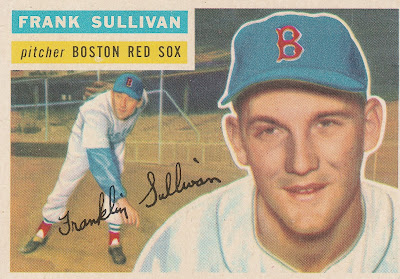 The best Red Sox pitcher of 1955 was Ace Starter Frank Sullivan. The 6'6" Righty hurled a league leading 260 innings and won 18 games, best in the AL as well. He recorded 3 shutouts, and made his first of two straight All-Star appearances. 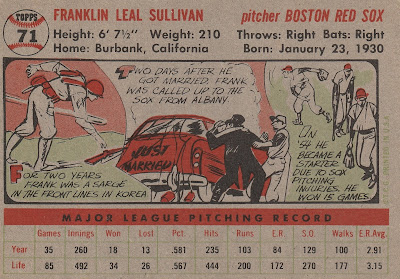 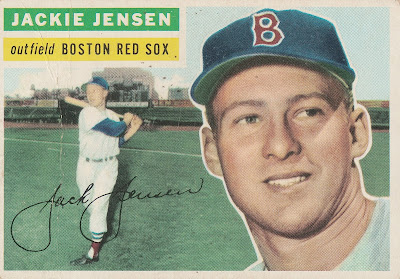 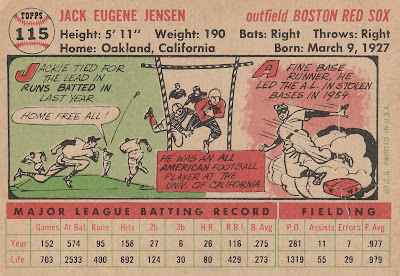 The 1958 AL MVP led the league in RBI 3 times in the 50s, all after coming to the Red Sox from the Washington Senators in 1954. Jensen was known as a reluctant star - while he was good enough to play professional baseball at a high level, he was often quoted in interviews showing distaste for the travel, the time away from his family, and the pressures of playing professional ball. He retired twice - once after the 1959 season, then again after the 1961 season, having returned to the Red Sox for one more season. 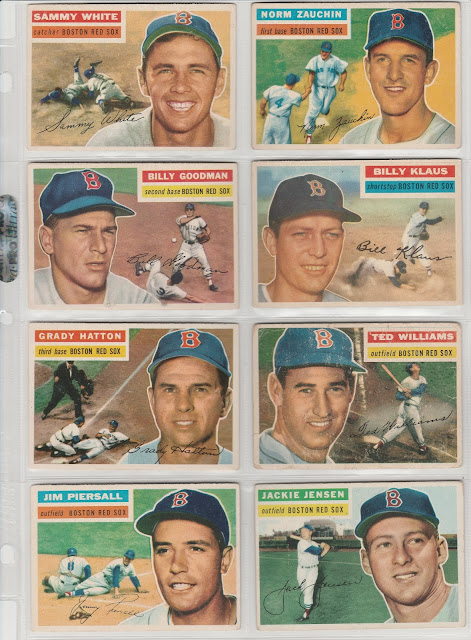 In addition to Jensen and Ted Williams, the Red Sox had power hitting Norm Zauchin (who replaced the late Harry Agannis) hit 27 homers, and Jim Piersall hit .283 with 13 homers just above league average with a 105 OPS+. Second Baseman Billy Goodman scored 100 runs to go with 99 Walks and 176 hits. 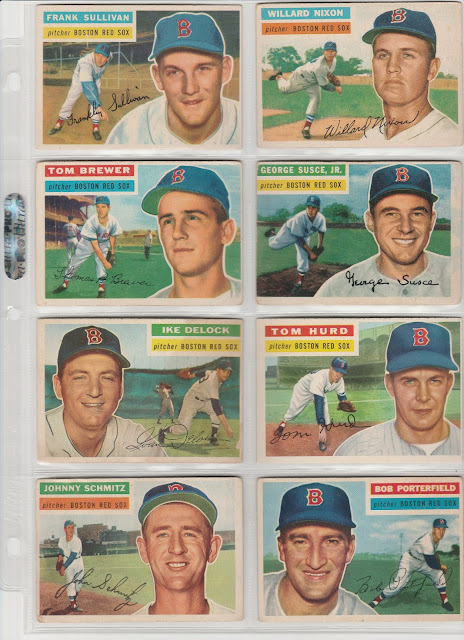 Outside of Frank Sullivan, the pitching staff was roughly league average. 24 year old righty George Susce, Jr. worked out of the pen and as a starter, and had a decent strikeout to walk ratio while allowing just above 3 runs per nine innings. Journeyman reliever Johnny Schmitz recorded victories against all teams in both leagues in his career. 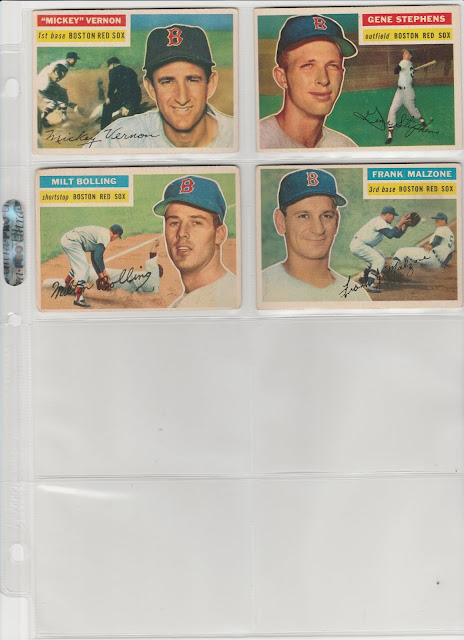 The Cubs were known as "Lovable Losers," and while the Red Sox seemed to find themselves in position to win many times over the years, their losses seemed to come in more creatively agonizing ways. Despite having one the greatest players of all-time in Ted Williams, they managed to make it to just one World Series during his storied career. The 50s saw the team lose ground to rivals in New York, as the team passed on opportunities to sign Jackie Robinson and Willie Mays after holding tryouts they attended, and in fact were the last team in the majors to break the color line that had been a stain on the game for decades. Not considering all possible avenues to sign and develop talent put the franchise at a disadvantage and in the 1960s and 70s the team's success was no doubt tied to their expanded recruitment efforts.