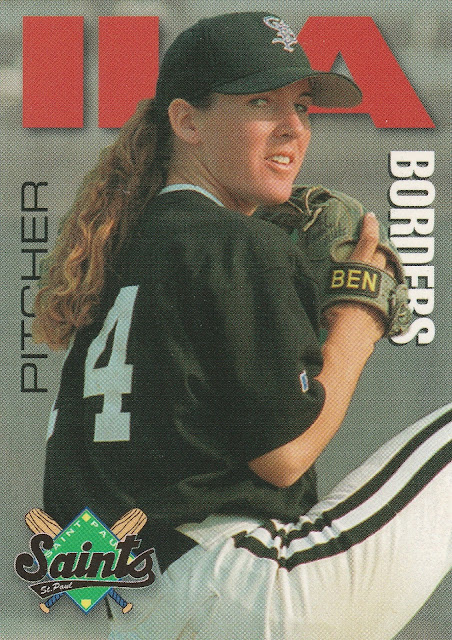 In 1994, Ila Borders became the first woman to pitch in a collegiate baseball game, after being the first woman to receive a college scholarship to play baseball. Borders pitched for four years in college, for Southern California University (now known as Vangaurd University) and Whittier College. During her Senior year at Whittier, she was referred to as the team's most consistent starter. She was 2-2 with a 3.00 ERA against conference opponents, and 4-5 with a 5.22 ERA overall in her 1997 season.

After college, Borders signed with the Saint Paul Saints of the independent Northern League. She would only spend one month in Saint Paul before being traded to the Duluth-Superior Dukes. Her debut for the Saints was a rocky one -- she hit the first batter she faced, balked during the second batter's plate appearance, and ultimately gave up 3 runs without recording an out. Borders was primarily a starting pitcher until joining the Saints - learning a new role while also being under intense scrutiny certainly didn't make her job any easier. 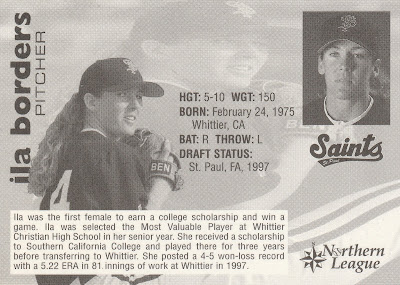 Borders would pitch for the rest of the 1997 season for Duluth, and would find success in 1999 when her new team in Madison (Still part of the Northern League) began to use her as an "Opener" - a role that has just now caught on in the majors. She started 12 games for Madison, appearing in 15 games overall, and had a fantastic 1.67 ERA over 32 innings pitched. Borders was a control pitcher that would work the corners and lower half of the plate to attempt to induce ground balls.

After her playing days (She retired following the 2000 season) she became a firefighter and EMT in California, Arizona, and in Oregon. In recent years, she returned to baseball, as a pitching coach for the U.S. National Women's Team. In 2018, she made a comeback as a pitcher on the Women's National Team. She was named to the 20 player roster, but did not make an appearance in the 2018 Women's Baseball World Cup.