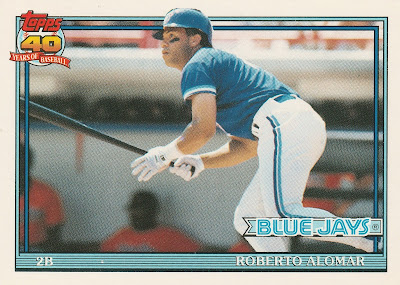 The 1991 Topps Set raised the bar for a company that had in some ways coasted through the 80s. For the brand's "40th" Anniversary, Topps went above and beyond to improve the photo quality, not just in terms of printing the cards, but in photo selection. Roberto Alomar's first Blue Jays card is a great example.

Alomar was one of six Hall of Fame players in the set. Jack Morris returned to the Twin Cities for just one unforgettable season, placing his name into the pantheon of great post-season performers on the back of a 10 inning shutout in game 7 of the World Series. Gary Carter stayed in California after a season in San Fran, now sporting Dodger Blue. Former Expos teammate Tim Raines was on the move as well, switching from the NL to the AL and joining a dangerous White Sox team on the Southside. Two Rookie Hall of Famers as well -- Jeff Bagwell coming off the trade from Boston to get his career started for the Astros. Catching phenom Ivan Rodriguez was on his way to greatness deep in the heart of Texas. 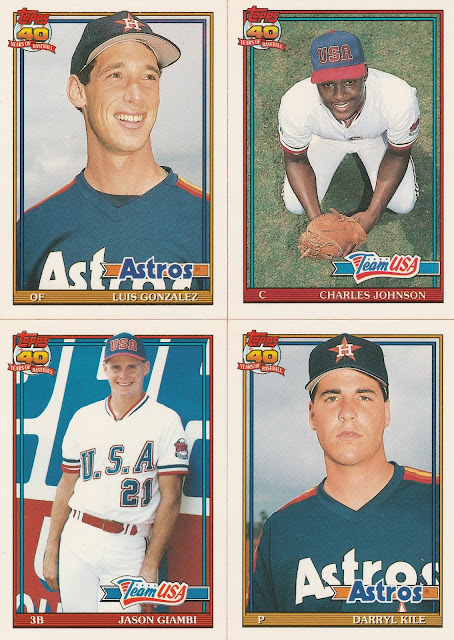 Speaking of Rookies, and speaking of the Houston Astros, the set had a hearty dose of both. Dback World Series Hero Luis Gonzalez was on his first Topps card, and Team U.S.A. was once again featured. Jason Giambi is the "bigger name" of these two Olympians, but Charles Johnson's card is interesting in light of his relationship with baseball cards over the years. Johnson's next Topps Card would be in the 1999 Topps Set, even though he was a member of the 1995 Topps Rookie All-Star squad, and was a member of the 1997 World Champion Marlins. That 1997 Season was awesome, Johnson caught 123 games and had 0 errors committed. He's one of just three catchers in MLB history to catch 100+ games in a season without an error.

Just like the 1987 Set, the 1991 Topps Traded set was a big one for the Minnesota Twins. Jack Morris was joined by the new kid, Chuck Knoblauch, who would be the 1991 AL Rookie of the Year. Mike Pagliarulo and Scott Leius platooned at Third Base to fill the void left by losing Gary Gaetti. The middle of the lineup was bolstered by free agent signing Chili Davis and added some depth to the bullpen with righty reliever Steve Bedrosian. Once again, the big Topps Traded checklist was a portent of post-season success.

Topps gave horizontal cards a fair shake again in earnest starting in 1991, though they would still be a long way away from a horizontal set. 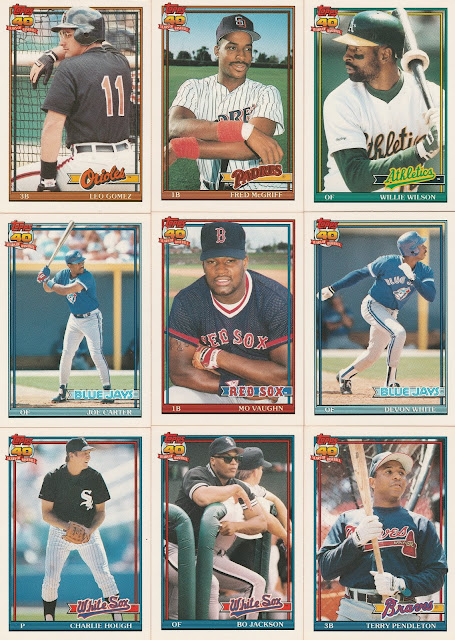 My favorites from the set that I haven't mentioned already.... A lot of photography in the on deck circle and during batting practice in this set. 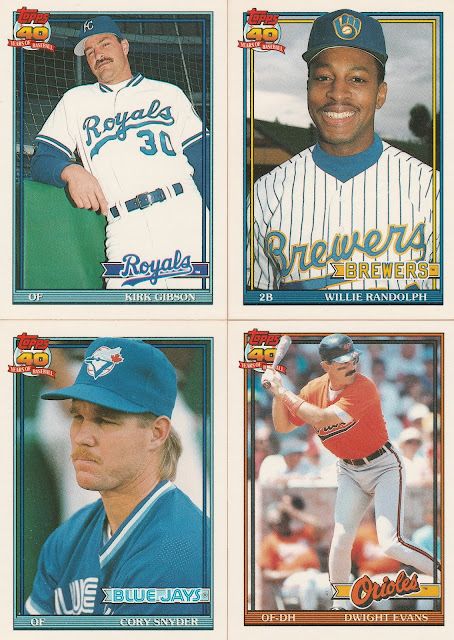 I didn't catch any terrible photoshop / airbrush jobs in this set - Topps really made an effort to get guys a card in their new uniform, as disorienting as it may be to see Dewey Evans wearing .... Orange? Cory Snyder as a Blue Jay? Gibson and Randolph at least had a full season or so with their new team, but it still just looks wrong!

This is the last set in the Series - If I get a good deal on it, I'll share the 1992 Traded set some time soon. Who was your favorite traded set regular? Dave Parker? Rick Cerone? Someone else?