Here they are - the third class of the Topps All-Star Rookie Team, selected "by the Youth of America" following the 1962 season and featured in the 1963 Topps set.

I have completed the run of these up through 2015, at least all regular issue cards that bear the All-Star Rookie Trophy. The gang's all here for the 1962 squad.

Third Baseman - Ed Charles
"The Poet Laureate of Baseball" was a 29-year-old rookie in 1962 for the Kansas City Athletics. Charles excelled in his years in KC, consistently hitting double digits in homers and stolen bases. In 1967, he was traded to the New York Mets, and in his final season, provided much needed veteran leadership for the 1969 Miracle Mets championship team. Charles grew up in Florida, and spent nearly ten years in the minors, many of those in the Deep South in the early 50s. The long road was filled with many indignities, but he found reasons to persevere, both the counsel of his grandfather, and the example set by Jackie Robinson. Like Jackie, Ed found a more welcome audience when he played in Canada as a 19 year old. His final season in minors also came North of the Border in Vancouver in 1961- he crushed PCL pitching and finally got his chance to play in the majors the following season. His Major league career high 17 homers and 20 steals in 1962 made him an easy choice for the Topps Rookie All Star squad.
Ed's Rookie Card was in the 1962 Topps set. 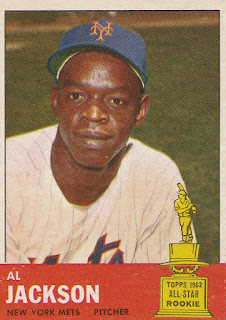 Left Handed Pitcher - Al Jackson
Al threw the first shutout in Mets history, the first Shutout at Shea Stadium, pitched the last game ever at the Polo Grounds, and had a knack for just missing his team's playoff runs. He was on the 1959 and 1961 Pirates roster, but was in AAA for the team's 1960 Championship Season. He Started and came out of the bullpen for the Cardinals in 1967, but made no appearances in the 7 game World Series that the Redbirds won. After that season, he was traded back to the Mets, and was a veteran presence, much like Ed Charles, on the Miracle Mets team in 1969. However, Jackson didn't make it to the end of the season with the club, ending his career in Cincinnati, mid-way through their 1970 divisional pennant run. His sage advice for the young guns in 1969 like Tom Seaver, Jerry Koosman, and Nolan Ryan eventually led to a regular gig as pitching coach. He was in that role again in 1999 and 2000 for the Mets, again making the World Series. Along the way he helped guys like Ron Darling in the minors and Al Leiter in the bigs. His Rookie year included 4 complete game shutouts, and had the Mets' offense been a bit more robust in 1962, he may have won more than just 8 games, while losing 20. Even so, he managed to win the hearts of the voters and was named to the Topps All-Star Rookie Squad.
Al's Rookie Card was in the 1962 Topps set. 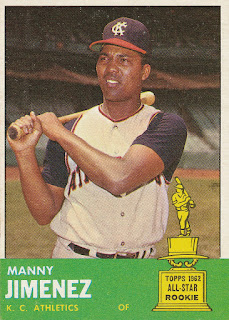 Outfielder - Manny Jimenez
Manny Jimenez first got a taste of professional ball at the age of 18 in the Mexican League. At 19, he torched the record books at Class C Eau Claire, leading the league with a .340 batting average. Born in the Dominican Republic, Manny had to let his bat do the talking. By 23, he had cracked the lineup for Kansas City and had a sparkling debut season, batting .301 with 11 homers. He wasn't able to get the same playing time again, relegated to pinch hit duties throughout the remainder of his career in K.C. and later with Pittsburgh.
Manny's Rookie Card was in the 1962 Topps set. 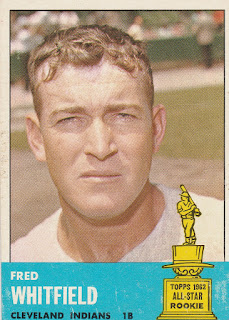 First Baseman - Fred Whitfield
Rookie Card
Fred spoke softly and carried a big stick. He wasn't particularly fast, and an old pitching injury meant he had a noodle arm, but he could rake. Whitfield did his damage in '62 as a member of the Saint Louis Cardinals. His first career homer cleared the roof at Busch Stadium, a towering shot off veteran ace Billy Pierce of San Francisco. The highlights would mostly come later for Fred, who was traded to Cleveland in the following off-season (hence the card with no hat). In the next four seasons, he'd hit double digit homers each year. 1965 was his best, clubbing 26 homers and boasting a whopping OPS+ of 131. Whitfield has a special place in this card collector's heart - his is the last card (#283) in the 1965 O-Pee-Chee set. 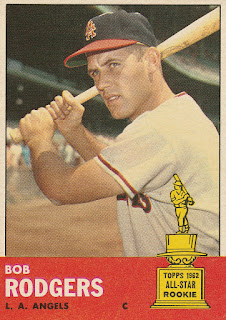 Catcher - Bob Rodgers
Bob "Buck" Rodgers played his entire major league career in L.A. and was a steady presence behind the dish for the Halos in the 60s. He later became a manager and made several stops around the league, never quite making his mark as a skipper, though leading his teams to respectable finishes. A pitcher in High School (check out the stats on the back of his card!), Buck was also a formidable hitter. Once reaching the big leagues for good in 1962, he led the Angels in Doubles and Triples, no small feat for a backstop. For the better part of the decade he provided solid defense, called a great game, and provided timely hitting to the fledgling expansion franchise.
Bob's Rookie Card was in the 1962 Topps set. 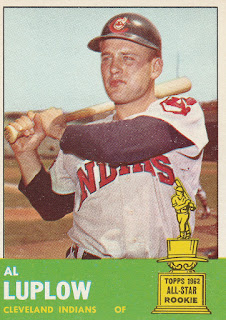 Outfielder - Al Luplow
Al Luplow was the left handed hitting half of the platoon in left field for Cleveland in 1962. The role played into his strengths - he hit 14 homers and had a slugging percentage of .475 that season. His career highlight came the following year in Fenway Park, when he leapt over the bullpen wall in Right Center to rob Dick Williams of extra bases.
You can read a great re-telling of that catch here
Luplow was a football player in college at Michigan State, but settled on baseball instead. You may sensing a trend, but Luplow played for Cleveland, Pittsburgh, and the New York Mets in his 6+ seasons in the big leagues.
Al's Rookie Card was in the 1962 Topps set, a "Rookie Parade" card which he shared with Manny Jimenez. 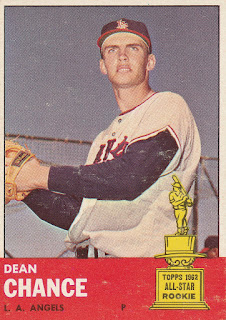 Right Handed Pitcher - Dean Chance
Chance began a string of 7 straight 200+ inning seasons in 1962, cementing his reputation as a workhorse. He also made a name for himself as a front of the rotation starter leading by all rookies with 14 wins in '62, then becoming the youngest pitcher (23 years old) to win the Cy Young award just two years later. Doubly impressive was his win came in the midst of a run of 4 Cy Young Awards for Sandy Koufax and Don Drysdale, at a time when only one prize was handed out for the two leagues combined. His 1.65 ERA led all of baseball, as did his 15 complete games and 11 shutouts.
Chance was a 20 game winner that season and again in 1967 for the Minnesota Twins. By 1969, the heavy workload had finally caught up with his arm, and though he held on for a few more seasons, he pitching sparingly until retiring in 1971.
That's when things got really interesting. Dean returned to his family farm in Ohio, but soon he was on to other pursuits. Perhaps fueled by his friendship with fellow hurler /gambler Bo Belinsky, Chance became a Carnival barker in the 1980s and founded the IBA (the International Boxing Association) while managing several boxers. He later became the Association's President. Chance passed away just a couple months ago, a great story was published here in the local paper, which you can read here.
Dean's Rookie Card was in the 1962 Topps set. 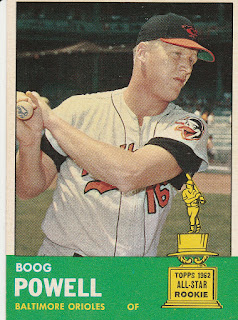 Outfielder - Boog Powell
Should Boog Powell be in the Hall of Fame? At the very least, he should be in the Hall of Very Good. Similar in reputation at the time to Fred Whitfield, Powell was a mountain of man that killed baseballs from the very beginning of his career. Fewer than 100 players in the history of the game have hit more home runs, he was a 4-time All-Star, and the 1970 AL MVP. The early part of his career was marred by injuries, but he still managed to finish in the top ten in the league in Homers several times, 7 times overall in his career. He had a very short peak (those 4 All-Star years), but was definitely a force to be reckoned with at the plate.
Overcoming the injury bug, he annually started 150 games from 1968 to 1971, producing 92 homers in those 3 seasons. He had a late career resurgence for Cleveland in 1975, clubbing 27 round trippers that season. His Topps All-Star Rookie Season included just 15 homers and a .243 batting average, but the kids knew he was destined for bigger things.
John's Rookie Card was in the 1962 Topps set. 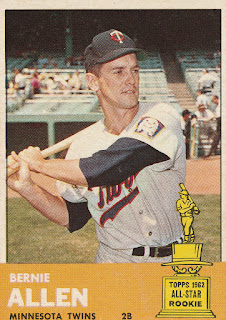 Second Baseman - Bernie Allen
Like Al Luplow, Bernie Allen was also a Big Ten Football player, though Bernie was the star Quarterback for the Purdue Boilermakers. Bernie chose baseball in the end, as it was his first love. Allen, like many other Topps Rookie All-Stars, had his best season in his first year, finishing third in the Rookie of the Year balloting. In 1964, Allen tore his ACL turning a double play. Despite the pain, the team doctors did not recommend surgery. Allen sought further medical opinions in the offseason, having surgery in October. The doctors cautioned him that his career as a professional athlete may well be over. The surgery was successful, and after an arduous off-season of rehabilitation, Allen managed to return to the Twins in 1965, helping in a reserve role, albeit in only 19 games. He found a regular role again a couple years later in Washington for the expansion Senators, continuing his role as a second baseman with a decent bat. Allen ended up playing in 9 more seasons after his ACL tear, almost unheard of in that era. His 1962 season featured a franchise record 12 homers by a second baseman, as well as good defense up the middle.
Bernie's Rookie Card was in the 1962 Topps set. 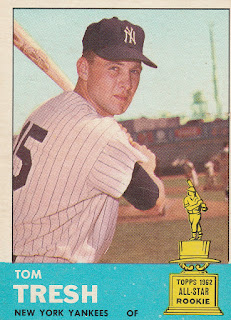 Outfielder (Short Stop)- Tom Tresh
Tom is listed as an outfielder, but he was named the Shortstop for the Topps All-Star Rookie Team and was named AL Rookie of the Year in 1962 by the Sporting News and BWAA. (The NL Rookie of the Year, Ken Hubbs of the Cubs, couldn't even get his own face on his 1963 Topps card. Thanks, Topps!). Tresh was also named to the AL All-Star team as a rookie (and returned again in 1963). He appeared on 3 different cards in the 1963 Topps set - one with Mickey Mantle and Bobby Richardson, and another Commemorating his homer in Game 5 of the 1962 World Series. Tresh's heroics were not limited to that swing, he led the Yankees in batting average, hits, and runs scored for the Series. While playing mostly at Short in 1962 during the regular season, he started seeing time in the Outfield and was transitioned to a full-time job in Left by the time the 1963 Topps set came out. He Won a Gold Glove in 1965 patrolling all three outfield spots, but was shifted to third base the following season. He responded with a career year at the plate, knocking out 27 homers and finishing second in the league with 287 Total Bases.
Tom's Rookie Card was in the 1962 Topps set.
Posted by Brian at 7:00 PM