Day 22: A Card of a Common Player That Always Seemed To Elude You

Taking the lead from Tony at Off-Hiatus Baseball Cards this will be the twenty-second of 30 posts, using the prompts provided. I won't necessarily post one every day, but I will do one for each card, toss in a few "insights" (as insightful as I can be, anyway), and usually include an honorable mention or two, just because I'm like that. 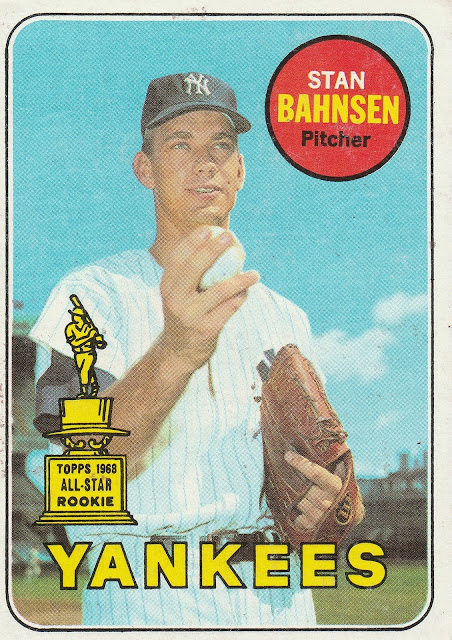 Here's my pick. It's hard to call any card from the 60s "common" by today's standards, but this was the last card I needed to bring my Topps All-Star Rookie set up to date. I might have been able to find this card sooner if I had been looking for it specifically, but I had a random shotgun approach to building this mini collection. By the time I was down to the last 5 cards, I decided to take care of it in one afternoon at a card show. I was able to find two from the first table, then 1 each at the next two vintage tables. Stan Bahnsen was still missing! Sure, I could have just bought it on eBay or Sportlots or COMC, but instead I just kept going to shows. It took three more shows before someone had it in stock! 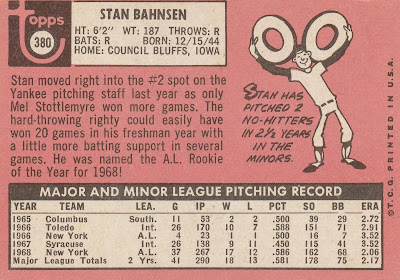 Since these are basically one card posts, why not share the backs, too? Bahnsen, like many young pitchers in the 60s and 70s, started out with impressive numbers, but ran into arm trouble after a heavy workload. You can see the promise that Bahnsen had back in the late 60s. 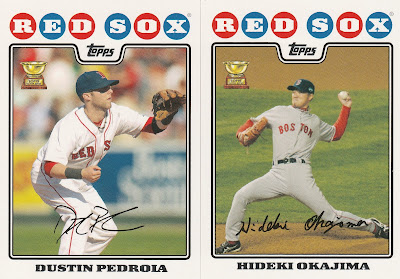 uh oh. I vaguely remember putting these two cards in as place holders, but I thought for sure that I had replaced them with the real deal. Well... I didn't! 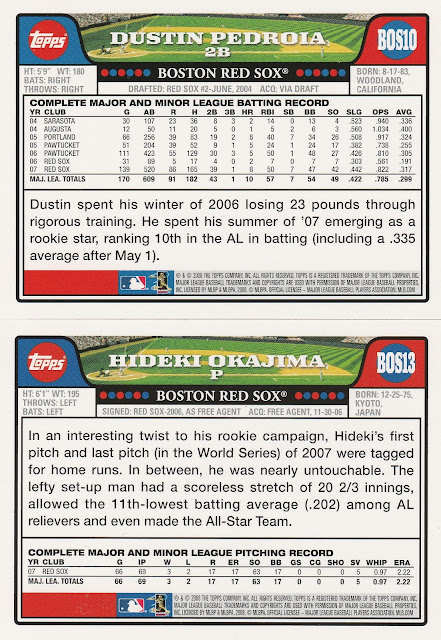 Turns out I still need these two Red Sox from the flagship set, because I only have the team set version! Any Boston fans need these? I think I have the whole team set from 2008 (obviously out of the blister pack now), so I would trade the set for these two as regular Topps base cards. I guess there are two commons that continue to elude me!
Posted by Brian at 6:28 PM