Taking the lead from Tony at Off-Hiatus Baseball Cards this will be the twenty-ninth of 30 posts, using the prompts provided. I won't necessarily post one every day, but I will do one for each card, toss in a few "insights" (as insightful as I can be, anyway), and usually include an honorable mention or two, just because I'm like that. 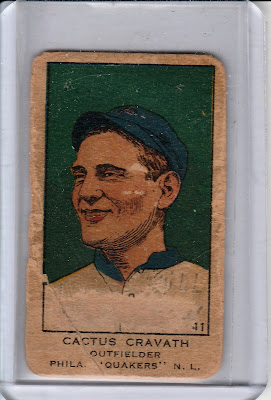 Here's my pick! Gavvy Cravath was the premier power hitter of the 1910s. People bring up "Home Run" Baker, but his nickname came from a single World Series homer, not from terrorizing pitchers all season long like Cactus Cravath. Cravath's first name is actually Clifford - he got the name Gavvy as a shortened version of Gaviota, a graceful Pacific Coast bird that he either resembled in the outfield, or that he killed with a hard hit ball. The "Cactus" nickname is also due to his origins in the Southwest United States. He led the league in homers 6 times in the 1910s, including an at the time unheard of 24 homers in 1915. He has a great quote about the joys of being a power hitter in an era of "Small Ball" -- he declared "I steal bases with my bat." 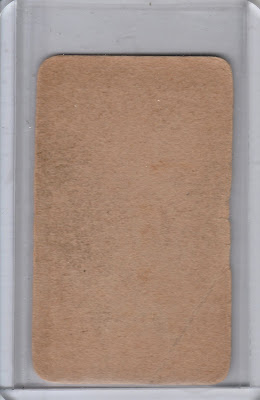 Since these are one card posts, why not share the backs? Maybe when there's nothing on the back, it's less interesting. The W514 set were originally sold in strips of 10 cards at a time, and features 7 of the "Eight Men Out," including Shoeless Joe Jackson. There are 120 cards total in the set, Cactus Cravath is the only one I have. He's listed as a member of the Philadelphia Quakers, which was another name for the Phillies franchise at the time. I've shared it before, but I recommend reading his SABR biography - written by Bill Swank. 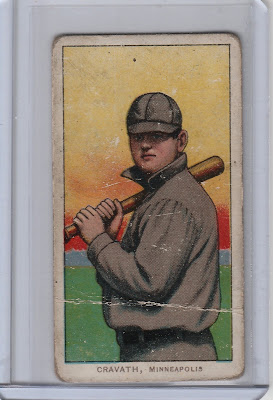 It's like I'm a Gavvy Cravath supercollector! Here's his T206 card. 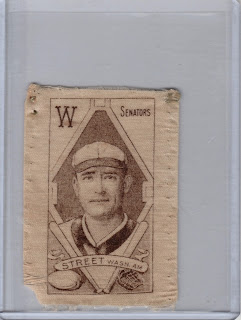 Gabby Street was a Catcher for the Washington Senators from 1908-1911. This is a 1911 S74 Silk "card" - his claim to fame (beyond being an accomplished defender behind the plate) was catching a ball dropped from the top of the Washington Monument on the National Mall in DC. 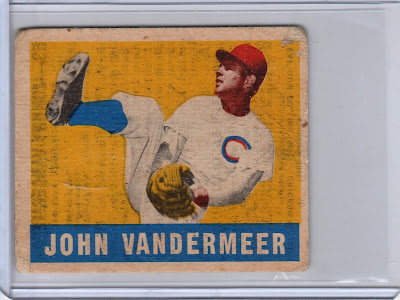 Barely making the pre-1950 cut is this 1948 Leaf card of Johnny Vandermeer - the Cincinnati Reds hurler tossed two no-hitters in a row, a feat which I doubt will be matched. Pete Rose often said that it was this record that would never be broken, even safer than his hit record. He rightly points out the difficulty in matching it, but surpassing it would mean tossing three  no-hitters in a row in the major leagues. There's a High School pitcher in New Hampshire that has a streak of 4 no-hitters  going right now. The all-time record in High School is 6. Two different pitchers threw 6 consecutive no-hitters in High School. That's insane.
Posted by Brian at 9:00 PM