Taking the lead from Tony at Off-Hiatus Baseball Cards this will be the twelfth of 30 posts, using the prompts provided. I won't necessarily post one every day, but I will do one for each card, toss in a few "insights" (as insightful as I can be, anyway), and usually include an honorable mention or two, just because I'm like that. 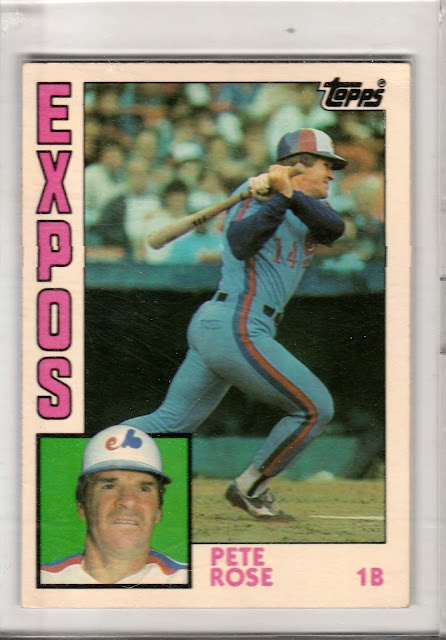 Here's my pick - with the 50s, 60s and 70s the difficulty was picking the best out of several standout cards. Once the 80s hit, sheer volume of options is enough to overwhelm the senses. I decided to go with this Pete Rose card because it is so jarring visually to see him in an Expos uniform. "Visually jarring" is a fair assessment of the 80s (and an understatement for the 90s). I associate him with the Reds first and foremost, a little bit as a Philadelphia Phillie, but rarely is his stop in Montreal at the forefront of my mind. He was north of the border for 95 games - just long enough to reach the 4,000 hit mark - before returning to Cincinnati to close out his playing career and start a stormy and infamous stint as the Reds' Manager. 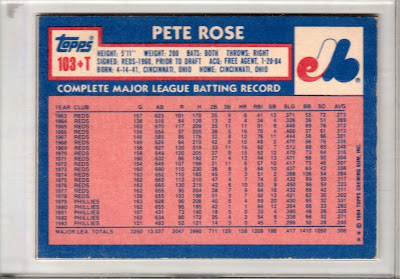 Since these are essentially one card posts, why not share the backs, too? That's some tiny print! His effectiveness at the plate was severely diminished in his final Philadelphia season, with the lowest batting average and hit total of his career. Getting a chance to play regularly at first base for the Expos, he had slightly better numbers in 1984. After the trade back home to the Reds in August, Rose found a fountain of youth, hitting .365 in the final 26 games of the year. His hot finish would set the stage for passing Ty Cobb's all-time hit mark in 1985. 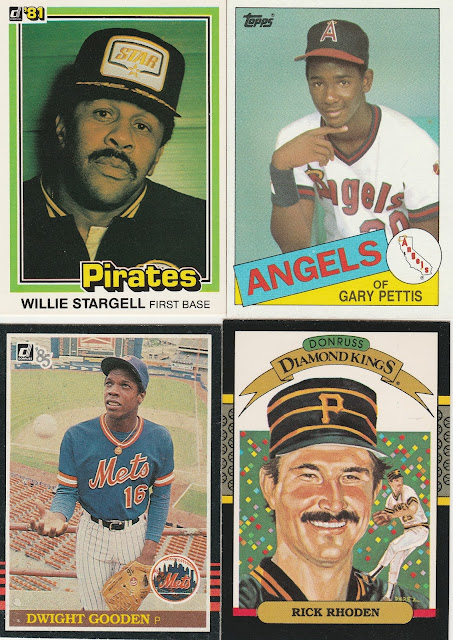 Mentioned earlier were rookies of Rickey Henderson and Kirby Puckett, and I could probably name a top ten for each team for each year of the decade, there are so many interesting cards in the decade. Pops Stargell is sporting his awesome "STAR" hat, which was well deserved. The prank of the decade may have been Billy Ripken's bat knob, but Gary Pettis getting his little brother to pose for his card is a noteworthy oddity as well. One of the highlights of the 80s was the introduction of box bottom cards, and this 1985 Donruss box bottom card is one of my favorites. A post about the 1980s wouldn't be complete without the cringe-worthy Diamond Kings series. Rick Rhoden's 1987 card is a celebration of the format.
Posted by Brian at 6:07 PM