Day 18: A Card of A Player Who Became Manager of Your Favorite Team

Taking the lead from Tony at Off-Hiatus Baseball Cards this will be the eighteenth of 30 posts, using the prompts provided. I won't necessarily post one every day, but I will do one for each card, toss in a few "insights" (as insightful as I can be, anyway), and usually include an honorable mention or two, just because I'm like that. 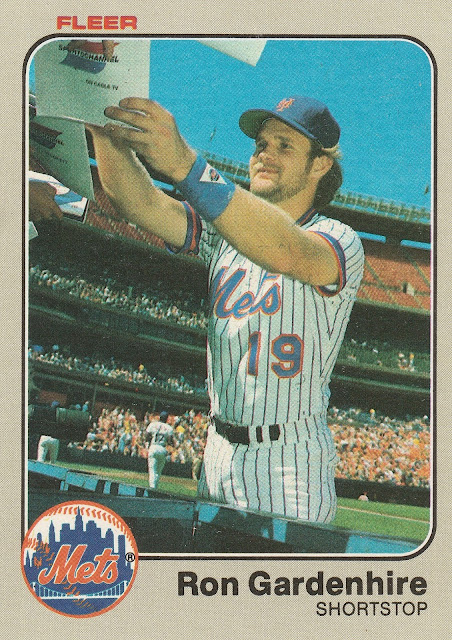 Here's my pick - Gardy was Twins manager from 2002 - 2014. Only Tom Kelly managed longer as a Twin (Bucky Harris in Washington is the All-Time Franchise leader), and since Tom Kelly didn't play in the big leagues, I figured I would go with Gardy. I will admit that towards the end of his tenure I was one of many Twins fans that joined the chorus to replace him with some new blood, but I still feel like the Twins rough patch was not his fault. He's currently battling prostate cancer, but he plans to return to coaching as soon as his health allows. 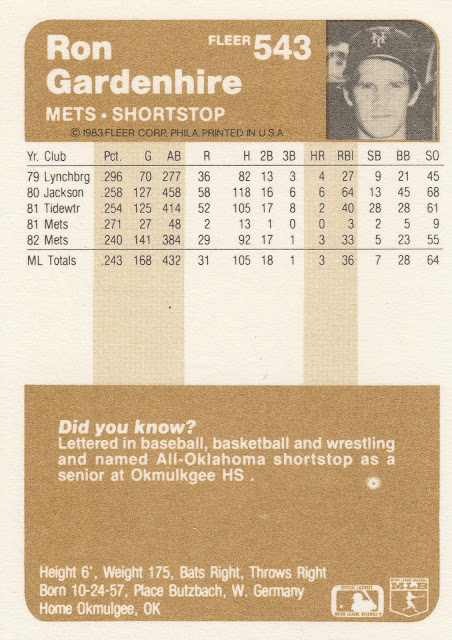 Since these are essentially one card posts, why not share the backs, too? Gardy was in an army family, and as a result was born in Germany, though he grew up in Oklahoma. His entire MLB career was with the Mets, including starting at 2nd when Dwight Gooden made his major league debut. His final game came in 1985, just missing out on the Mets' World Series title. He was the Twins' 3rd Base Coach in 1991, so he does have one championship ring. It's interesting to see that he stole 28 bases in his final full minor league season - his career was derailed by injuries, especially to his hamstring, which sapped his speed. 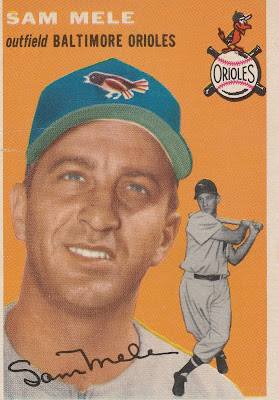 Mele was the Twins' manager from 1961 - 1967 and led the team to their first World Series appearance in Minnesota. He's described on this card as a power hitter - though it's more doubles power than Home Run power. Mele played in the outfield and at first base for Boston, Baltimore, Cleveland, Cincinnati, the Senators, and the Boston Red Sox. He led the league in Doubles in 1951. Mele also played for the Minneapolis Millers when he was first signed, a Red Sox farm team at the time. After his managing days in Minnesota, he returned to Boston and became a minor league instructor, scout, and jack-of-all-trades for 25 years. 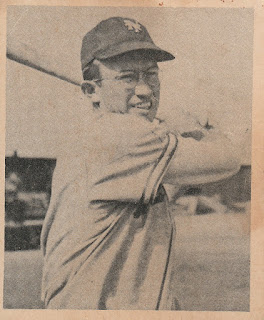 Bill Rigney was the Twins' skipper from 1970 - 1972, taking over for the volatile Billy Martin. Here Rigney is just 29 years old, playing in the New York Giants infield. He would make the 1948 All-Star team, but he truly made his mark on the game as a manager and bench coach, starting in 1956 with Giants. 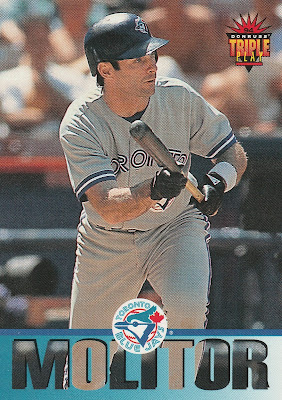 The Twins current manager is the first to have been enshrined in the Hall of Fame as a player. A surprising first season that had the Twins within a game of a playoff birth gave way to a franchise record for losses. Early returns in 2017 have been more promising, and it remains to be seen exactly what his managerial personality is. Always considered a cerebral player, he is given quite a bit of credit for his baseball IQ. His style is certainly more laid back in comparison to Gardenhire, though Molitor has been known to get thrown out of a ballgame if things are getting out of hand.
Posted by Brian at 6:46 PM