Day 30: Your Favorite Card in Your Collection

Taking the lead from Tony at Off-Hiatus Baseball Cards this will be the last of 30 posts, using the prompts provided. I didn't necessarily post one every day, but I did do one for each card, tossed in a few "insights" (as insightful as I can be, anyway), and I usually included an honorable mention or two, just because I'm like that. 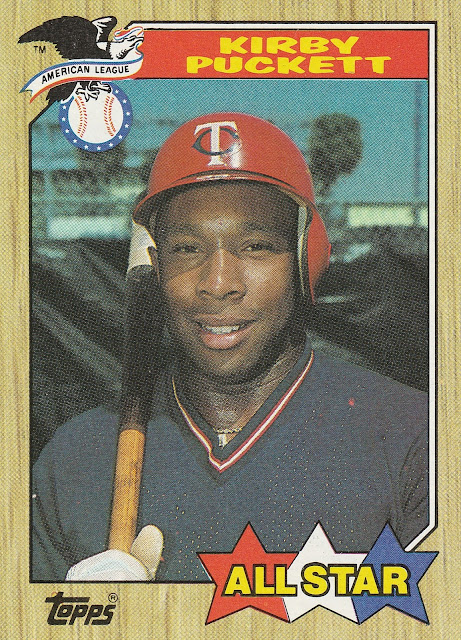 Here's my pick - it's not the most glamorous card in my collection, but it's the first Kirby Puckett card I ever owned. I think I traded a Barry Larkin and a Reds pitcher to my cousin in Ohio for this card. I would have given him the whole pack that my dad bought for me. 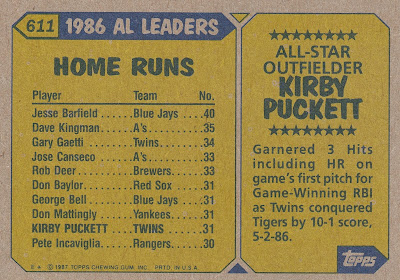 Since these are basically one card posts, why not share the backs? The 1987 Topps All-Star cards featured the league leaders in categories in which the main player excelled. The AL home run leaders from 1986 may seem like Puckett's year was not all that impressive. But consider that in 1984, Puckett did not hit a single homer in his rookie season. In 1985, he hit just 4. Puckett was mainly a singles hitter, competing with Wade Boggs and Carney Lansford for batting titles. But he went to work that off-season with Tony Oliva, then a roving instructor and hitting coach for the Twins, to re-tool his swing. He went from slapping and slashing down at the ball to a more familiar uppercut swing, along with a much more pronounced leg kick to generate power.

Honorable mentions? Check out the last 29 posts on the countdown, they all qualify! This was a really fun trip, thanks again to Tony for the idea to get things rolling. It has been great reading everyone else's posts as well
Posted by Brian at 6:00 PM