Day 17: A Card From the First Set You Put Together Hand Collated

Taking the lead from Tony at Off-Hiatus Baseball Cards this will be the seventeenth of 30 posts, using the prompts provided. I won't necessarily post one every day, but I will do one for each card, toss in a few "insights" (as insightful as I can be, anyway), and usually include an honorable mention or two, just because I'm like that. 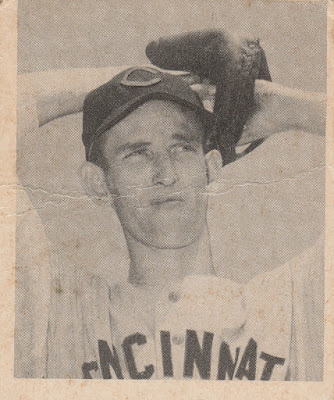 Here's my pick - the other Day on the countdown that was similar to this one asked about the first set I tried to complete. In that case I went with a card from the 2014 Topps Heritage set, which I did complete before I finished this one. So, the "twist" I'm adding here is that 1948 Bowman is the first set I finished without buying any packs. the 2014 sets were still available in retail stores when I finished it, and you'll still find a loose pack in a repack box from that set. You won't find many 1948 Bowman packs lying around. There's one wrapper on eBay right now going for just a hair under $4,000, no cards included. I don't plan on making an offer for that one anytime soon...
I finished the 1948 Bowman set in about a year - starting with this card of Ewell Blackwell. 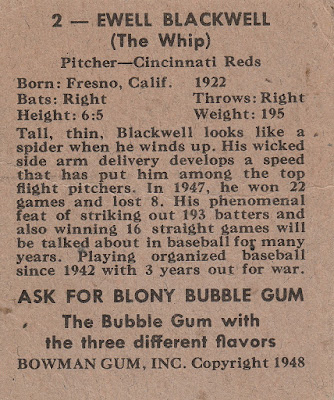 Since these are basically one card posts, why not share the backs, too? This is especially true for the 1948 Bowman set. The backs are the main reason I wanted to complete it. Bowman was Score before Score, the copy on the backs taught you a little bit about the player, how they did in the most recent season, and because of the era, often included a sentence about their military service. The set (which is a tidy 48 cards) is filled with great nicknames, another reason to have an interest in the reverse side. The side arm delivery of the wiry 6'5" hurler earned him the nickname "The Whip." This set, despite being small, oddly sized, b&w and not particularly sexy, is still one of my favorites of all-time. 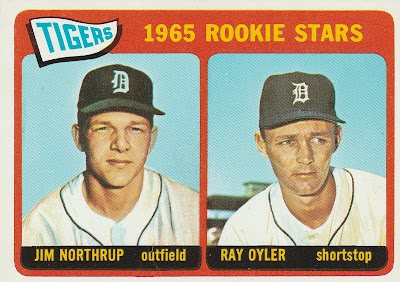 Ewell Blackwell was the first card that I purchased to build the 1948 Bowman set, this Tigers Rookie Stars card is the last one I needed to complete the 1965 O-Pee-Chee set. The 65 set goes to just card #283, and the mid 200s and above seem to be harder to find than the rest of the set. This one is #259, and there was a copy on eBay for more than I wanted to pay for months and months before this one finally popped up in an auction. The rest of the "high numbers" seemed to pop up regularly, but this one eluded me after all the others fell into place, either online or in person.
Posted by Brian at 7:17 PM