In 1980, The Texas Rangers finished 4th in the AL West with a 76-85 record. In '81, they improved to finish 2nd in the West, their highest ranking in the standings until 1994, when the team finished in 1st place, but missed the playoffs (along with all other teams) due to the '94 Strike that prematurely ended the season. 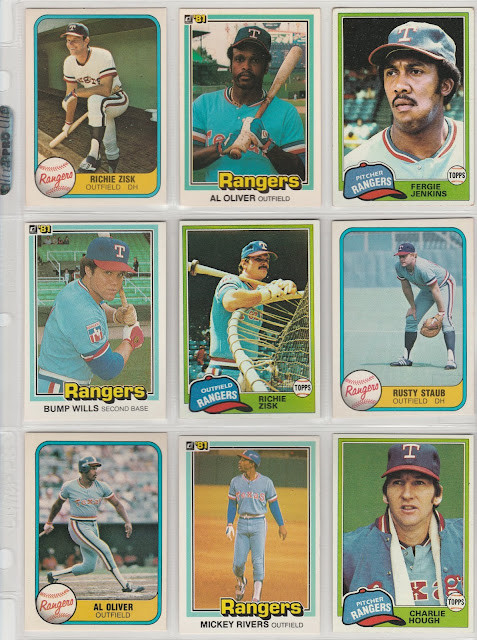 The 1981 Rangers were led by Manager Don Zimmer, who would be fired in 1982 but asked to interview candidates to replace him in a move that typified the bizarre and contentious relationship with team owner Eddie Chiles. The 1981 squad had a Silver Slugger (Al Oliver) and a pair of Gold Gloves (Jim Sundberg and Buddy Bell), but ultimately trailed the Royals and Athletics in the standings. 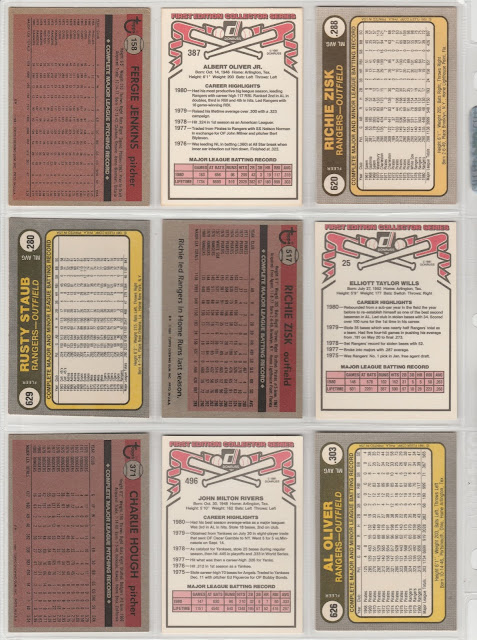 Donruss #387 Al Oliver - "Scoop" took over for Zisk as the Rangers primary DH in 1981, but had an even bigger post-Texas season in 1982. Now with Montreal, Oliver would win the NL Batting Title, while also leading the league in hits, doubles, total bases and RBI. He'd finish 3rd in the NL MVP vote that year.

Topps #158 Fergie Jenkins - The Hall of Fame hurler was making his second run with the Texas Rangers in 1980 and '81. He had probably his best MLB season his first time through the Rangers' org in 1974, when he posted a 25-12 record and an eye-popping 29 Complete Games. Doing so in the oppressive heat of Texas makes it all the more impressive. In 1980, Jenkins was 12-12 with 12 complete games. He would pitch another season in Texas, then two more campaigns with the Chicago Cubs before retiring with 286 career victories.

Donruss #25 Bump Wills - Son of Dodger great Maury Wills, Bump was a chip off the old block on the base paths. The switch hitting second baseman led the Rangers in stolen bases in 1980 and 81, He'd steal 196 over the course of his career, ranking at the top of the Rangers' all-time leaderboard.

Topps #517 Richie Zisk - After his time in Texas, Zisk went to the Pacific Northwest for a terrific trident of seasons in Seattle. He was used solely as the Mariners' DH, and bumped up his slash line compared to his time in Texas. He'd retire with 1,477 hits and nearly 800 RBI.

Fleer #629 Rusty Staub - Staub was used mostly as a DH for Texas in 1980, hitting for average and getting on base at a high rate (.370). His .828 OPS was the highest since his All-Star campaign in 1971 with the Expos. Starting in 1981, Staub would become the Mets' main pinch hitting option until his retirement following the 1985 season.

Fleer #626 Al Oliver - Oliver was a Texas Ranger for 4 seasons, and won the Silver Slugger award in 2 of those 4 campaigns. His .319/.358/.456 triple slash as a Ranger were the highest rates of any of his stops in the big leagues. He'd have notable success north of the border for both the Expos and the Blue Jays. In 1985 with Toronto, Oliver hit .375 in a losing effort in the ALCS.

Topps #371 Charlie Hough - Hough spent the entire decade of the 1980s as a starter in the Rangers rotation, and became the team's all-time leader in Wins, Strikeouts, complete games, and losses. He had just converted to a knuckleball pitcher in 1979, and the pitch allowed him to move from the bullpen to become a starter. He'd win at least 10 games a season from 1982 to 1990, and ended his career with a symmetrical 216-216 record.