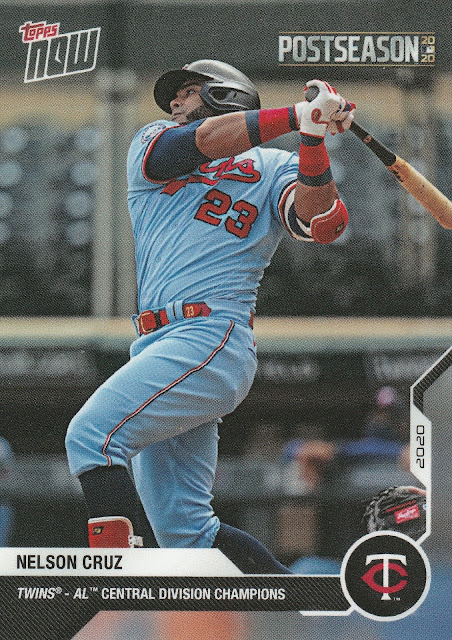 The Topps NOW post season set arrived today in the mail, let's catch up and see how the Twins did! 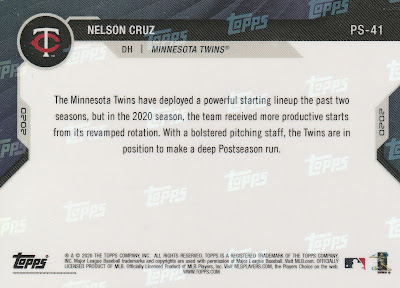 The bad news started before the games even began, with Josh Donaldson aggravating his calf injury during the final week, and not being named to the post season roster.
Byron Buxton played Game 1 despite lingering issues from a concussion suffered during the final weekend of games, then missed most of Game 2 save for a pinch running appearance where he looked visibly groggy. He was picked off first to end a possible scoring chance late.

The good news? Well, the Twins did have a much better starting rotation in 2020, allowing the 2nd fewest runs in the AL during the shortened season. The only problem? The starters don't pitch all nine innings, and they don't field every position either. Maeda and Berrios combined for 10 innings and just 1 run allowed. The bullpen, on the other hand, gave up 6 runs in 8 innings. 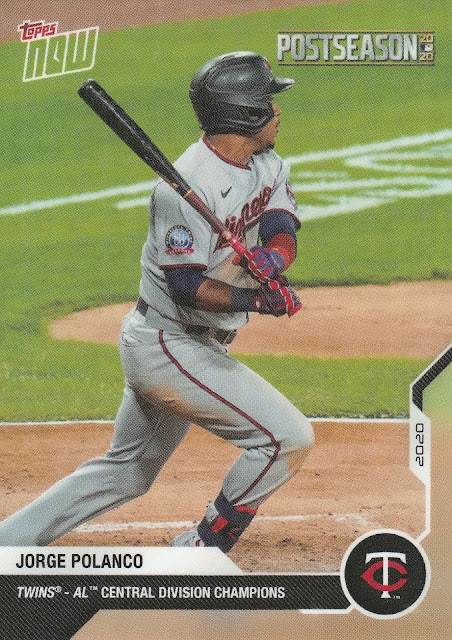 Game 1 was a very close contest until Jorge Polanco's error - he fielded a ground ball cleanly, but his throw to Luis Arraez at second pulled him off the bag, resulting in no outs. Houston took advantage and once they saw a small crack of daylight, they pounded down the door on the bullpen, some of the damage was self inflicted (a bases loaded walk by Sergio Romo). 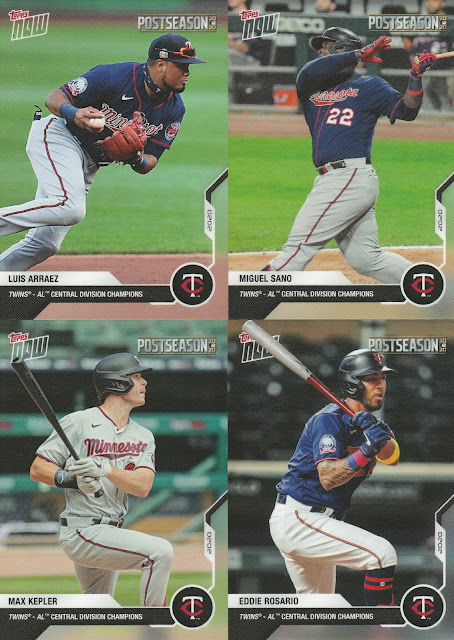 Luis Arraez was playing on a bad knee, just like 2019 nursing an injury that came late in the season at the worst possible time. He went 0-6 with a pair of walks. Sano, Kepler and Rosario went a combined 1-19, with the icing on the cake coming with Rosario getting himself ejected from Game 2 arguing balls and strikes with the home plate umpire.

The Twins set a record for futility by failing to win a game, extending their streak to 18 games lost, which is almost beyond comprehension.

A "sign" that things were not to be this year? Topps did not offer an autograph version of the Twins team set, despite offering auto versions of most of the other 16 post season teams. That's fine, I saved a little money.
Did your team make the playoffs this year? Would you like to see 16 teams again in 2021, or should it be returned to just the division winners and a pair of Wild Card teams?
Posted by Brian at 5:24 PM