Oh, I am considering it! This was actually much harder than I thought it would be, as I had several cards swapped in and out of each spot on the list. I some tough decisions, but ultimately something had to give. I don't call this blog Highly Subjective lightly - I could probably make a new list tomorrow and every day next week and still change my mind again later. But Matt was right, this was fun to put together a 2019 Yearbook page. 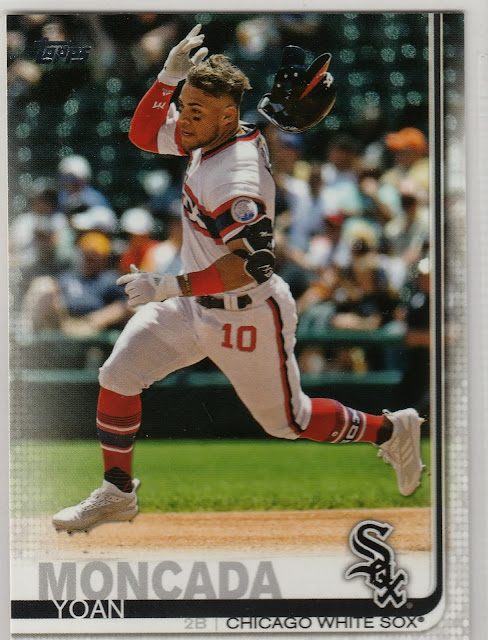 1 - 2019 Topps Yoan Moncada  Right away I had a really hard time picking just one card from the 2019 Topps flagship offerings. I would be lying if I said I was a White Sox "fan" but even I can't deny that they are a fun team to watch. Moncada came to Chicago in a trade with Boston for Chris Sale. Moncada, along with Eloy Jimenez, Tim Anderson, and Luis Robert form a youthful and dynamic nucleus. I really loved this card as soon as I pulled it from a pack. Throwback uni, base running action, helmet flying off. . . what better way to kick things off? 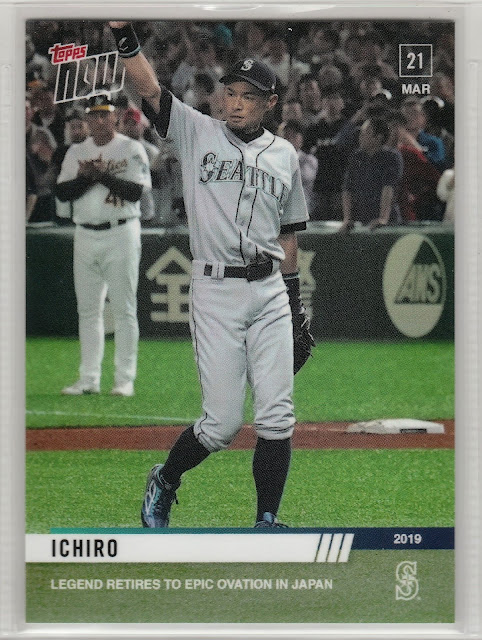 2 - Topps NOW Ichiro - 2019 was the year of the rookie, to be certain. But the first major memorable moment of the season came in March, as the Mariners and A's kicked off the season in Japan. It was thought by many that Ichiro was already done, but he made one last stand in his home country, playing for his first MLB team. This, to me, is what Topps NOW is really best suited to capture. I don't need a card of every game winner, but there are always those moments in a season that deserves extra attention. 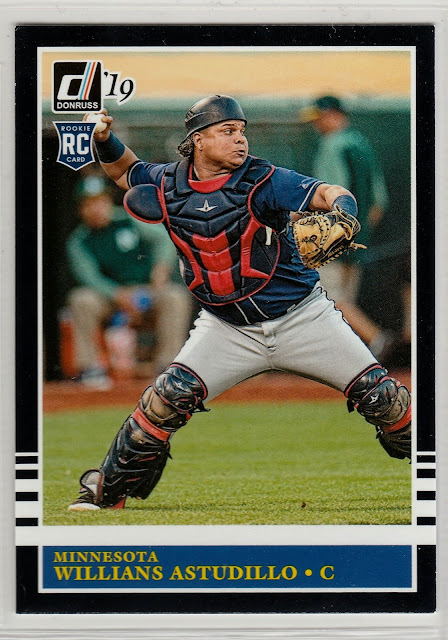 3 - 2019 Donruss Willians Astudillo  - Poor Panini! Thank goodness for catchers, right? The "other" baseball card company had another year stuck as an afterthought to the Topps juggernaut. I felt like throwing them a bone, as they did produce a large volume of cards in 2019. I hope one day they will regain the license from MLB. In the mean time, I think Panini should try to find more ways to stand out. Astudillo was the pick because his card was among the few that looked interesting. The lack of logos is not as bad on catcher cards, especially once the cap and mask has been tossed aside. 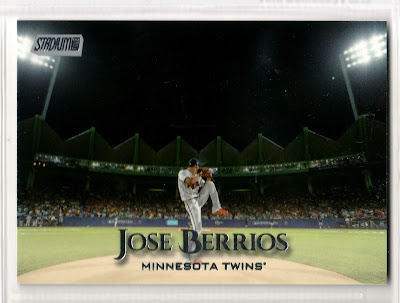 4 - Stadium Club - Jose Berrios This set never fails to find great photos. This image is actually from 2018, taken before the game started by Berrios in Puerto Rico at Hiram Bithorn Stadium against Cleveland. One of the things I always look for in my cardboard is context. I don't necessarily mean identifying the exact second a photo was taken, but an image that tells a story is so much more compelling to me than a generic batter at the plate or pitcher in the windup. As this card illustrates, however, even a seemingly mundane action (a pitcher in the windup) can make for a fantastic shot. 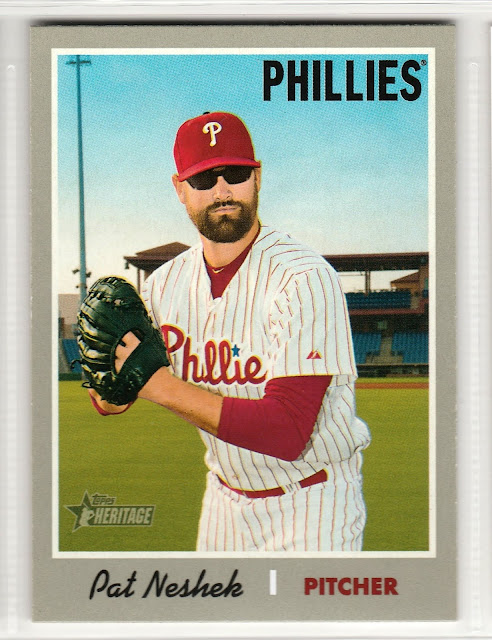 5 - Topps Heritage Pat Neshek - Nick already covered a lot of what I want to say about this card in his "Cards of the Year" post. I'm going to repeat it anyway. Pat is well known among collectors for his quirky delivery on the mound, and his unique signature that incorporates a baseball (with stitches). But most of all, Neshek is a fellow cardboard enthusiast! The pose chosen for this card was a nod to one of the greatest cards of the original 1970 set, and of course Pat hits it out of the park. 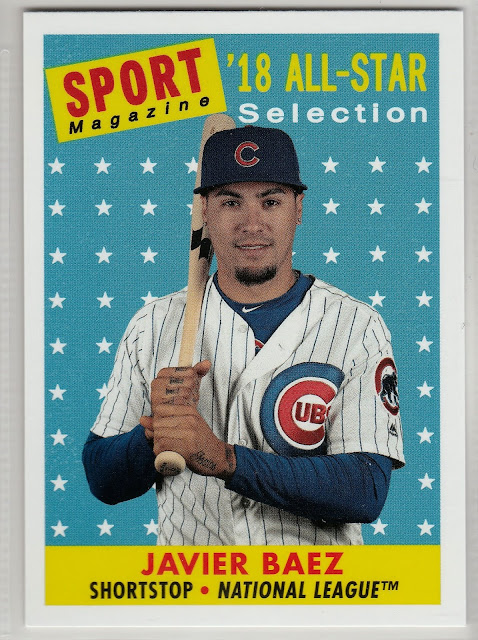 6 - Topps Archives Javy Baez - Not much to say about this one, Javy is one of my favorite players, the 1958 Topps All-Star subset has long been one of my favorite vintage designs. I am not a big fan of The Living Set, or Gypsy Queen, or A&G (though this year's design was my favorite so far). There were lots of sets to choose from, but I wasn't really into any of them ... oh well! 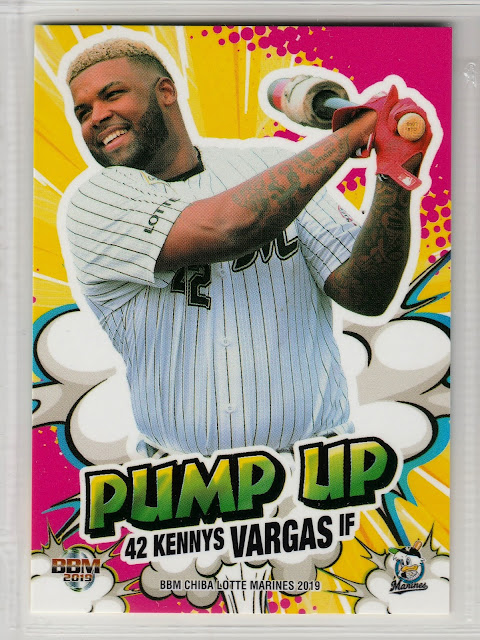 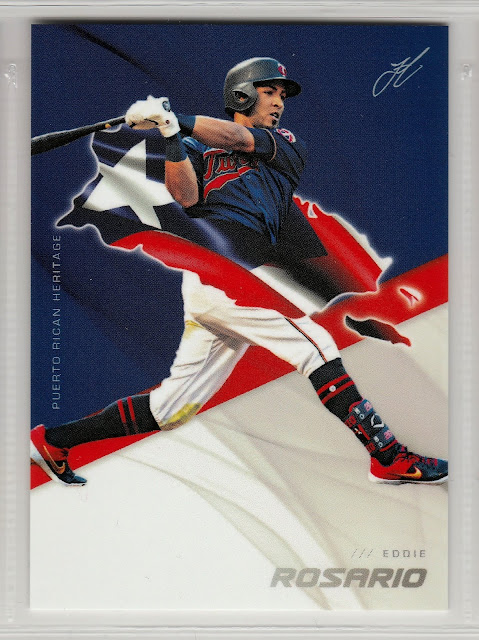 8 - TOPPS X LINDOR: Puerto Rican Heritage Eddie Rosario - Seeing as I primarily collect Twins among current releases, I think it's pretty remarkable that this is only the 3rd Twins card in this Yearbook Page. Topps has been working hard to cover every possible niche from vintage to modern, sets on demand and pre-packaged complete sets of their traditional flagship design. Starting with Bryce Harper last year, Topps has called in some of the bigger names in MLB to help design an exclusive set of cards. Eddie is a big-time fan favorite in Minnesota, and I'm sure he's a hit in Puerto Rico as well. 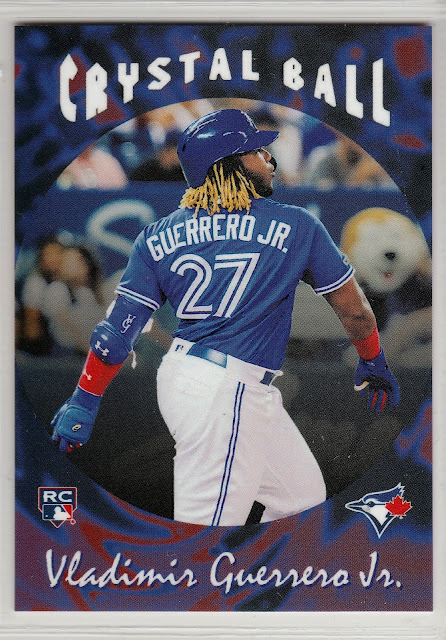 9 - Topps Throwback Thursday 1995 Crystal Ball Vladimir Guerrero, Jr.  - As I mentioned in the beginning, 2019 was the year of the rookie. Vlad was the player with the biggest hype, but there was also Tatis, Pete Alonso, Yordan Alvarez, Aristedes Aquino, Luis Arraez, and on and on! There was no shortage of cards to choose from for this wild card spot, but I had to go with this one. The on demand, extremely online version of Topps can be annoying at times, but I have to say that the variety can make everyone happy some of the time. I suspect that's the point! 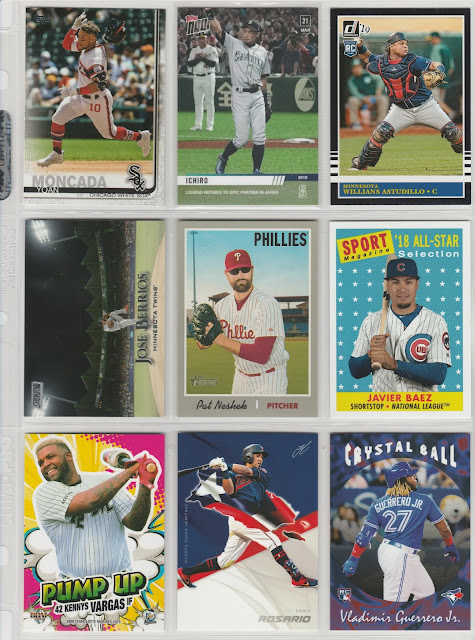