The Cubs were squarely in "Wait 'til Next Year" mode in 1980 and 1981, finishing 6th of 6 teams in the NL East in both years. They ever so slightly began to improve their fortunes in '81, with a second half finish good for 5th place, though they still sported the worst record overall that season, and narrowly avoided 100 losses in 1980. 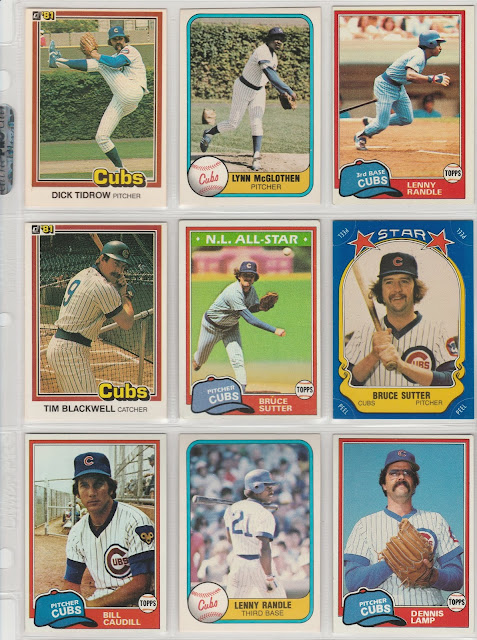 Lenny Randle was granted free agency in October of 1980. Bruce Sutter would be traded in December of 1980 in exchange for Leon "Bull" Durham from the Cardinals. Dennis Lamp was traded in March of '81 to the White Sox, Lynn McGlothen followed across town in August. Tim Blackwell became a free agent after the 1981 season. Bill Caudill was traded as a PTBNL in April 1982, so none of the players shown here made it to 1982 as a Chicago Cub. Given the team's record, a little roster turnover was probably a good thing. The Cubs drafted Billy Hatcher and Joe Carter in 1981, and shortly after 1982 began, made a franchise altering deal with Philly to acquire a light hitting shortstop named Ryne. 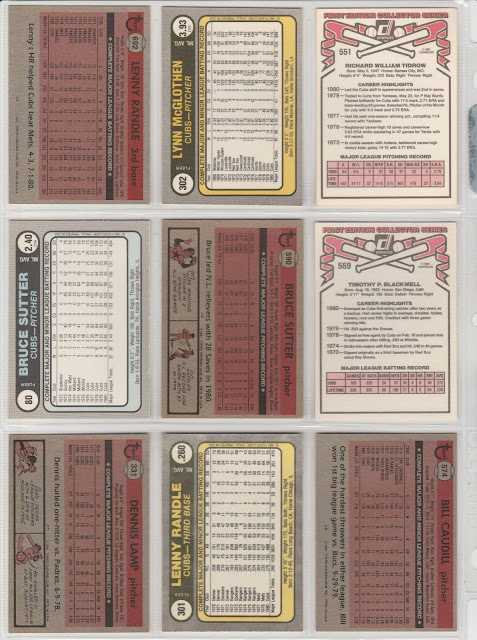 The Cards:
Donruss #551 Dick Tidrow - Tidrow was a pretty good middle reliever for the Cubs in 1980, and led the Club in appearances. He notched 6 saves and sported a 6-5 record with a 2.79 ERA to go with his imposing moustache.

Fleer #302 Lynn McGlothen - Lynn led the Cubbies pitching staff with 12 victories and 2 shutouts in 1980, but started just 6 games in 1981, relegated mostly to bullpen work before being traded to the ChiSox at the deadline. His best years came in his mid-twenties with the Cardinals. He went 44-40 with 9 shutouts over those 3 seasons in Saint Louis and was named the the All-Star team in 1974. He would finish his playing career with the Yankees in 1982. Tragically, McGlothen died in a fire at the age of 34 two years later.

Topps #692 Lenny Randle - Lenny speaks five languages, and in addition to being a baseball player, he was a recording artist and erstwhile stand-up comic. Randle was the primary 3rd baseman for the Cubs in 1980, while leading the Cubs in triples.

Donruss #559 Tim Blackwell - Tim is known for his bushy moustache, but he was a serviceable back-up catcher as well during his playing days. The switch hitting Blackwell was the #1 catcher for the Cubs in 1980, hitting 5 homers and driving in 30 runs over 103 games. All of those were career highs, and following his playing days he became a long-time coach and manager throughout the minor and independent leagues.

Fleer Star Stickers #80 Bruce Sutter - Over his career, Sutter notched exactly 300 saves, which seems low to the modern crowd but was among the highest all-time when he retired. His 1979 Cy Young still stands out as an oddity for a relief pitcher, but he finished in the top ten of voting for the award 4 other times. His second full season with the Cubs probably deserved more attention than it received. He saved 31 games and struck out 129 batters in 107 innings that year, 1977. His 1.34 ERA was tiny, but his ERA+ was a staggering 328, meaning he blew his competition out of the water. He finished 6th in the voting behind 5 20 game winners.

Topps #574 Bill Caudill -  Bill led the Cubs in ERA in 1980 with a 2.19 mark over 127 innings pitched. He had a rocky 1981 season, with an ERA north of 5, and would find himself trying to rebuild his resume in Seattle. He had a very good season in 1982 with the Mariners, and once he was converted to full time relief, even made an All-Star team as a member of the Athletics.

Fleer #301 Lenny Randle - Lenny was known for his speed, and was a 2 sport athlete in college, playing both baseball and football. Randle found a home in Italy after his final MLB season, and hit a staggering .477 for his Italian League team in 1983. Randle had over 1,000 MLB hits, but his most famous blow came as a member of the Mariners, when he tried to make a slow rolling ball go foul with some "wind-aided" assistance.

Topps # 331 Dennis Lamp - Along with Tidrow, Sutter, Bill Buckner and Tim Blackwell, the 1980 Cubs may have been the league leaders in soup strainers. Lamp tossed the only other Cubs shutout besides the 2 from McGlothen in 1980, though the rest of his starts that year ended up surrendering more runs than any other National League pitcher. Lamp would find greater success out of the bullpen, particularly in 1985 with Toronto, when he had a perfect 11-0 record in 53 regular season appearances, and 3 scoreless appearances in the '85 ALCS against the Royals. While KC ultimately prevailed, Lamp was able to turn out the lights on their offense each time he took the mound.