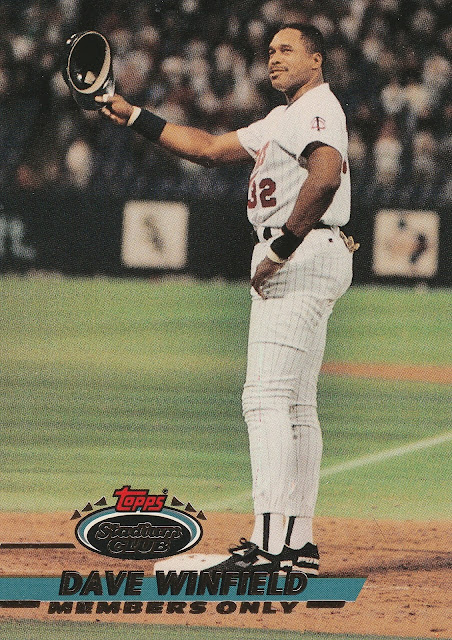 Dave Winfield tips his cap after getting his 3,000th hit off of fellow Hall of Famer and birthday buddy Dennis Eckersley. He became the 19th member of the 3,000 hit club, and he did it in Minneapolis, just a few miles from Saint Paul, where Winfield grew up. 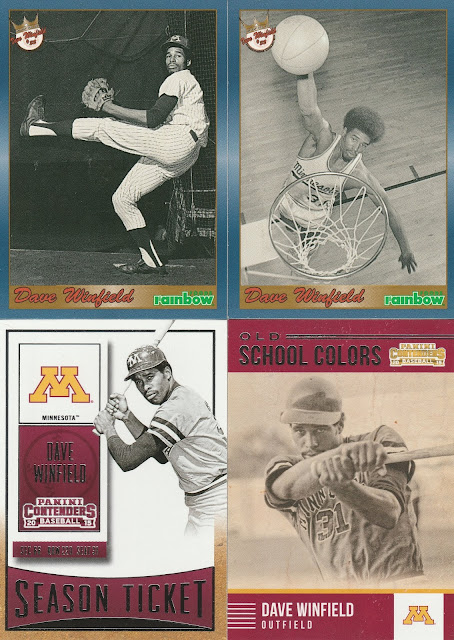 Winfield was a superstar Pitcher and Outfielder in college at the U of Minnesota- MVP of the 1973 College World Series. He was also a very good basketball player, and was drafted to play in the NBA (and the ABA), but chose baseball instead. He was also drafted by the Minnesota Vikings, though he did not play football in college at all. If you're keeping count, that's 3 different sports and 4 professional leagues that all drafted Winfield. 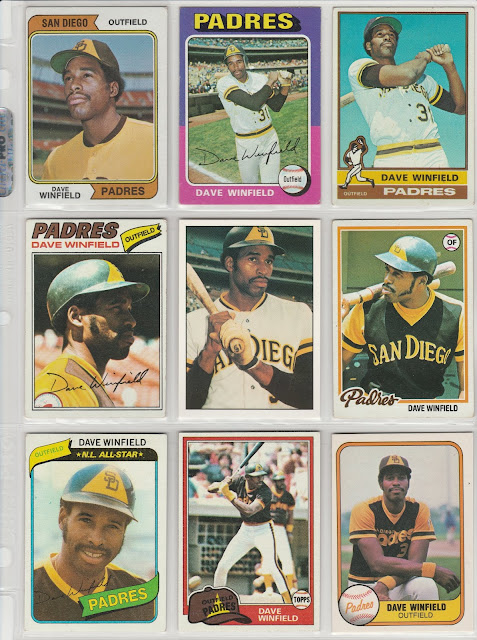 The Padres selected Dave with the 4th overall pick in 1973. The teams that passed on him (The Rangers, Phillies, and Brewers) would probably want another chance in hindsight. The Brewers ended up with Robin Yount at #3 Overall, so not a bad choice either. Winfield went straight from the College World Series to the Draft to San Diego. Even though he was a Pitcher first in college, the Padres were more intrigued at thought of him playing everyday and used him in the outfield right away. He never pitched in the big leagues, a missed opportunity if you ask me! His bat did not develop instantly, though he had flashes of brilliance from the beginning. Unfortunately for the Padres, Windfield would hit free agency just as he was reaching his peak, entering his age 29 season. In 1979 he had a fantastic year, leading the NL in RBI, OPS+, Total Bases, and Intentional Walks. 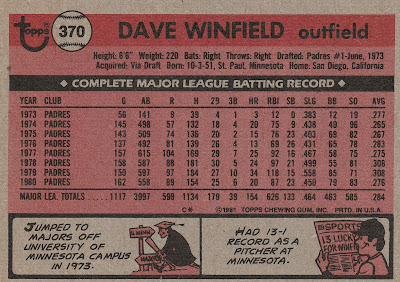 Totals with the Padres above 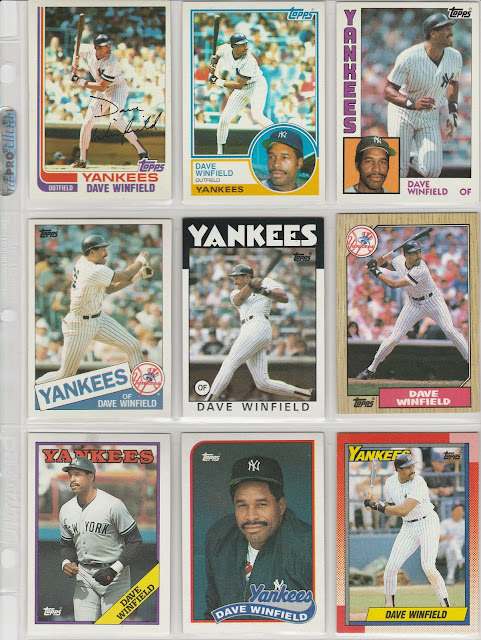 Winfield became baseball's highest paid player in 1981, the biggest free agent of the off-season and George Steinbrenner's most wanted. Winfield would join Reggie Jackson in the outfield for just one season, and it was shortened by a Player's Strike.  They would get all the way to the World Series, though Winfield's bat would slump at the worst possible time. In the 1981 World Series, Winfield hit just .045, getting just one hit in the 6 game series. Despite a .350 average in the Divisonal playoffs to propel the team to the Series in the first place, Steinbrenner only cared about the World Series struggles.
He had a tremendous season in 1982, hitting a career high 37 homers and winning a Gold Glove and Silver Slugger to go with his 6th straight All-Star appearance. In 1984, he and teammate Don Mattingly completed for the batting title all season long. Winfield finished with a career high .340 average, but was ultimately 2nd to Donnie Baseball. The public feud between Steinbrenner, which could be traced all the way back to signing Winfield (Steinbrenner thought the contract was for a smaller amount than it actually was), began to boil over in ugly ways. Steinbrenner hired a private investigator to find dirt on his slugging outfielder, but all he got for his troubles was a temporary ban from baseball. Winfield had a serious back injury in 1989 which threatened to end his career. Steinbrenner finally traded him mid-way through the 1990 season. 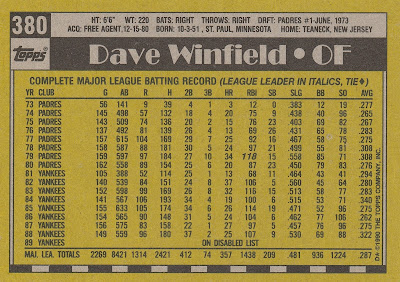 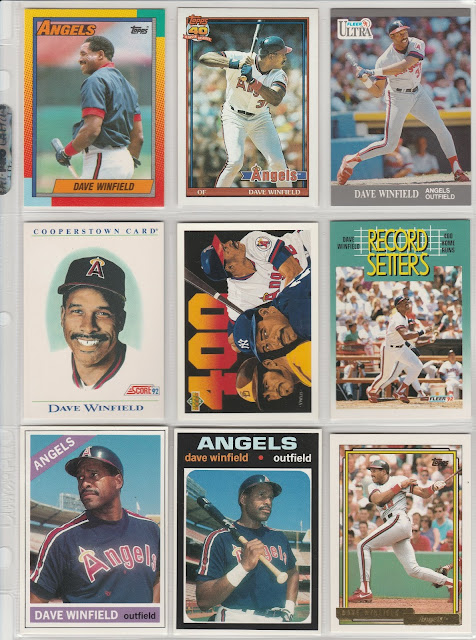 Winfield returned to Southern California, and continued to rack up extra base hits. He reached the 400 home run mark while in an Angels uniform, and gave the team 263 hits in 262 games. He was the 1990 Comeback Player of the Year, re-starting his career after missing the entire 1989 season. 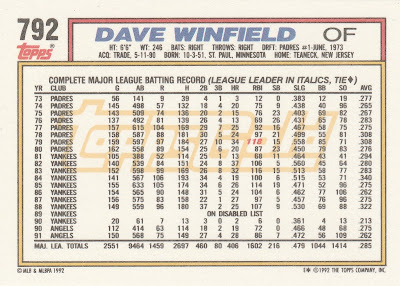 Whew, the print is getting smaller, y'all. Career Totals through Padres/Yanks/Angels seasons. 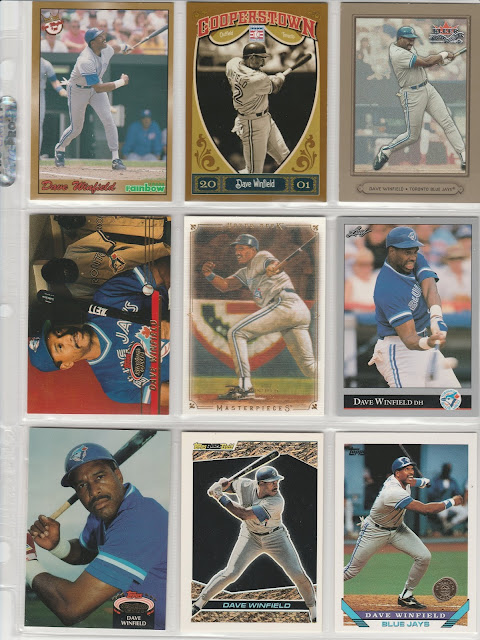 Winfield had hit for power, hit for average, stole bases before his back injury, and won 8 gold glove awards. One thing that had eluded him was playoff success. As a free agent in 1992, Winfield came to the Toronto Blue Jays, who had just missed the playoffs the year before. The addition of Winfield ignited the offense and the fan base. Early in the 1992 season, Winfield was giving an on field interview and asked the crowd to be more vocal and support the young team. "Winfield Wants Noise" became a rallying cry in the SkyDome that season, and his bat provided plenty of thunder on his own. In the 1992 World Series, Winfield became "Mr. Jay" after Steinbrenner's insulting "Mr. May" nickname following the 1981 World Series struggles. Winfield hit a game 6 game winning 2-run double to clinch the first World Series victory for a Canadian team. 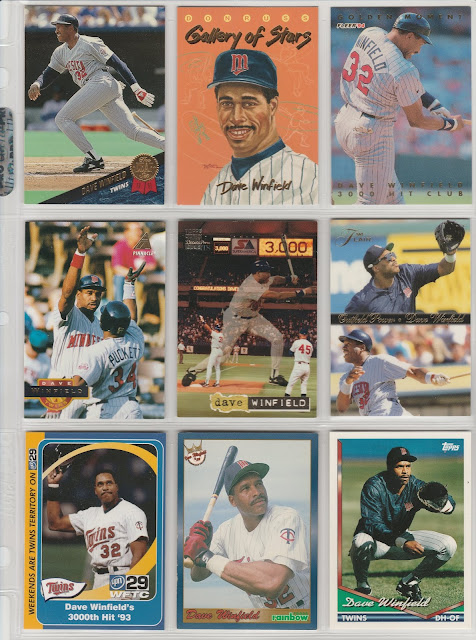 Big Dave was coming home! Winfield joined forces with Bloomington MN kid Kent Hrbek and Twins legend Kirby Puckett to try to bring another World Series victory to the Twin Cities. The team fell short of the playoffs, finishing with a rough 71-91 record. It was disappointing to say the least as the team had finished 90 - 72 in 1992, seemingly just a piece or two away from a playoff run. The starting pitching, which had been a strength in 91 and 92 had a serious free-fall. The top four starters all had ERAs over 4.00. Winfield did his part offensively, even at the age of 41, with 21 homers and 76 RBI as a DH. Things were not looking much better in 1994, the team was again doing just fine offensively, but the pitching was suspect again. The team looked to move Winfield, and traded him to Cleveland near the August waiver deadline. Of course, there was no baseball being played that August, the player's were again on strike. The return for Winfield would not come to the Twins until the off-season, but he had officially been traded. 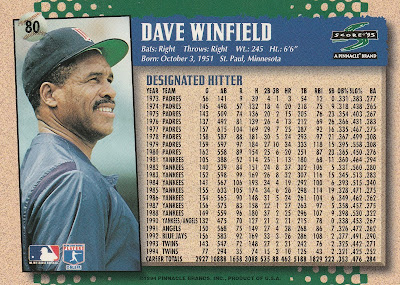 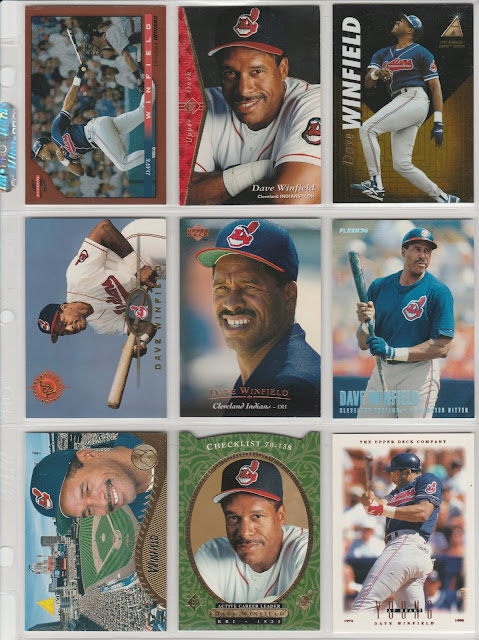 Winfield joined Eddie Murray with an otherwise young and hungry Cleveland team. Not hungry were the Minnesota Twins, who completed their trade for Winfield in exchange for a nice dinner. The Cleveland GM took the Minnesota GM out for dinner, and picked up the tab, thereby finishing the trade for Winfield. No, really! In 1995, Winfield played the final 46 games of his career, while dealing with a rotator cuff injury. He would end up missing Cleveland's playoff run, and would retire following the season. 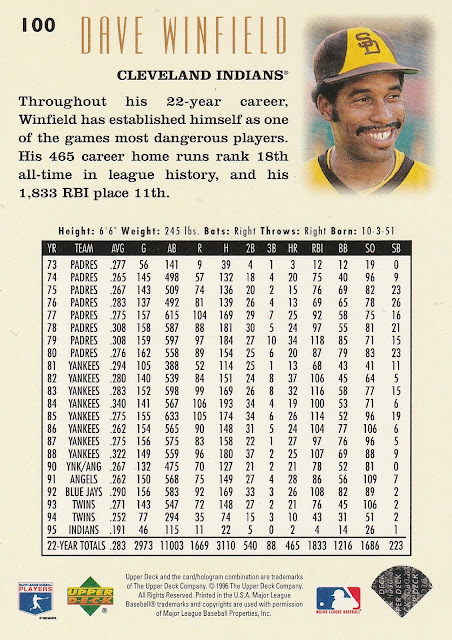