A Mad Dog, A Crime Dog, and Unlikely Champions - the 1987 Topps Traded Set 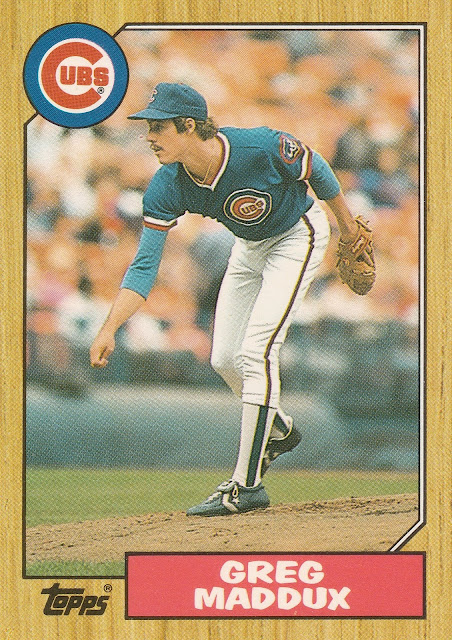 The most ubiquitous Topps design is the old woodgrain borders of 1987 Topps. The design was itself a riff on the 25 year old 1962 Design, proving yet again that there are no new ideas. But can you teach an old new tricks? The base set has been covered extensively, but maybe there are some lesser known gems in the traded set. Greg Maddux has his Topps debut here, en route to 18 Gold Gloves, 4 straight Cy Young awards, 8 All-Star games (that's it?), and 355 career victories. He also has a stat named after him, unofficial though it may be - A "Maddux" is a starting pitcher that tosses a complete game shutout, while throwing fewer than 100 pitches. He had 13 Madduxes himself, among his 35 career shutouts. 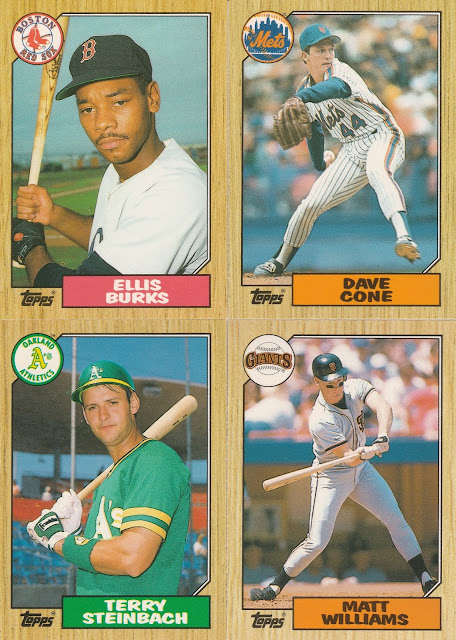 The other big name rookies in the set? Ellis Burks, who would go on to a great Red Sox career, and a MONSTER season in Coors Field for the Rockies. David Cone, shown here as a New York Met, who would find Maddux-like success in stops in Kansas City and with both the Mets and the Yankees, to name a few. Terry Steinbach is a Minnesota kid, who was in the middle of the Oakland Dynasty of the late 80s / early 90s. Matt Williams had an early run at Roger Maris' single season HR record in 1994, his quest was cut short by the work stoppage. He'd play in World Series with San Fran, Cleveland, and Arizona, winning it all in 2001. 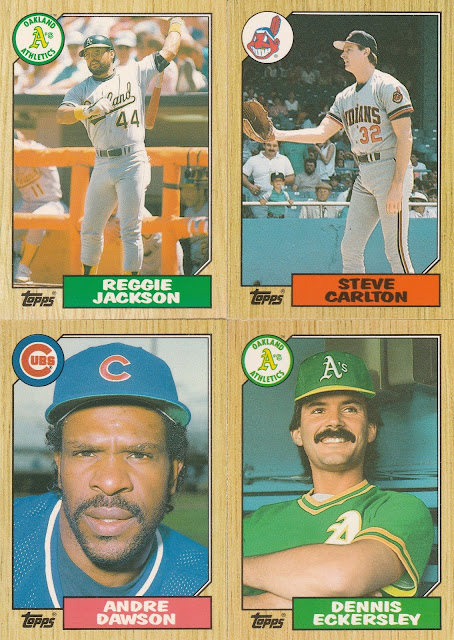 In addition to Maddux, there were 4 more Hall of Fame players. Reggie Jackson came back to Oakland for one last tour with the A's (it's one of my favorite cards of the 80s). Steve Carlton was keeping his career rolling in Cleveland, Andre Dawson was playing an MVP season for the only team he and his agent could convince to sign him during the thick of collusion by MLB owners. The Oakland A's added a new secret weapon to their bullpen, Dennis Eckersley, who would become a lights out closer. 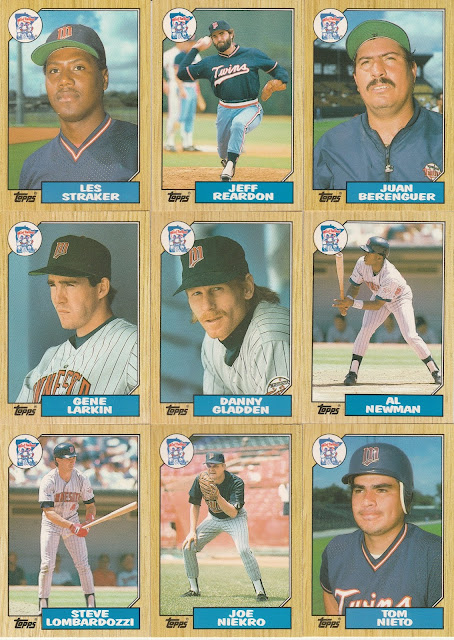 9 new Twins? Can you say championship?!?! The Twins added a Closer (Reardon), a great set-up man (Berenguer), a pair of starting pitchers (Niekro the vet, Straker the rookie), key bench players (Newman for defense/speed and Larkin for a lefty bat), and most importantly a new leadoff man / everyday left fielder, Danny Gladden. Gladden would be on both Twins World Series teams, and the argument can be made that the addition of his glove and bat was exactly what the Twins needed to make it over the top. 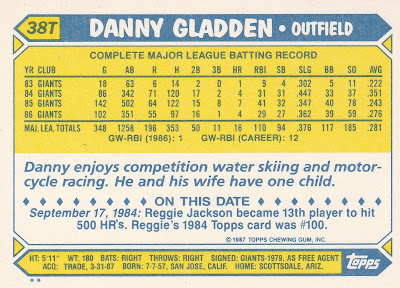 In the '87 series, he hit .290, drove in 7 runs, stole 2 bases, and hit a homer. In the 1991 Series, he scored the only run that would matter, the first run of Game Seven in the bottom of the 10th. He's a regular analyst on Twins radio broadcasts, always worth a listen for the stray Hrbek or Puckett story, and his fiery brand of harmless homerism. 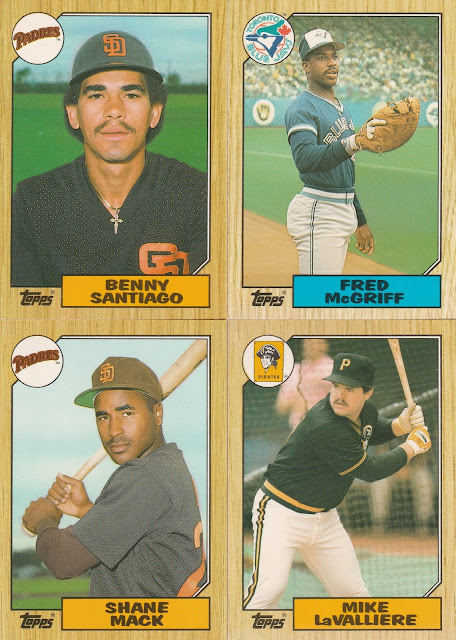 There were several guys that were Rookies, but these were not their official rookie cards. LaValliere was around for several seasons already, but I include him as I always considered him as a Pirate. Benny Santiago and Fred McGriff are making their Topps Debuts, but both had 1986 cards with other manufacturers. Shane Mack was on the '84 Olympic team, so this is his first card in an MLB uniform, but he and Mark McGwire both had 1985 Topps rookie cards. Mack is a criminally underrated part of the Twins' second championship - I'll sing his praises when we get to the 1990 traded set. 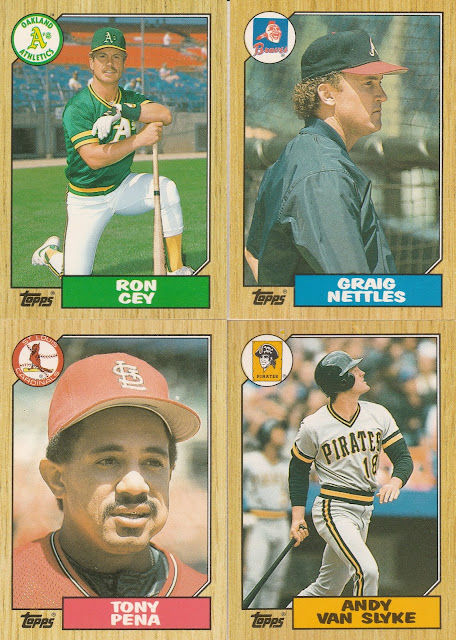 Two cards that just look wrong, and two that make total sense to me! 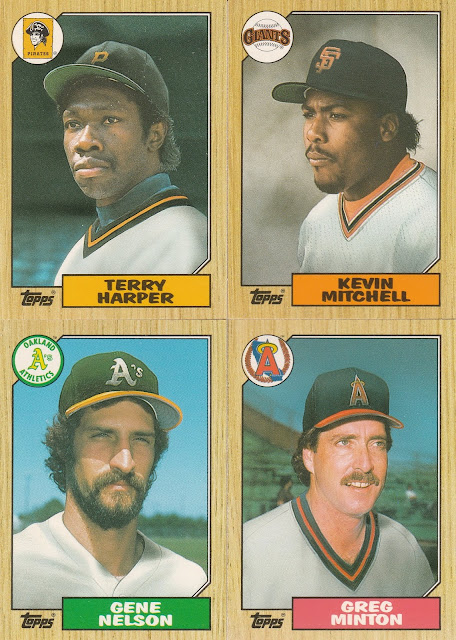 Yikes! Harper is like "how could you?" Mitchell and Nelson both smell something is off. Greg Minton is way too into it, but he's no stranger to airbrushing disasters.