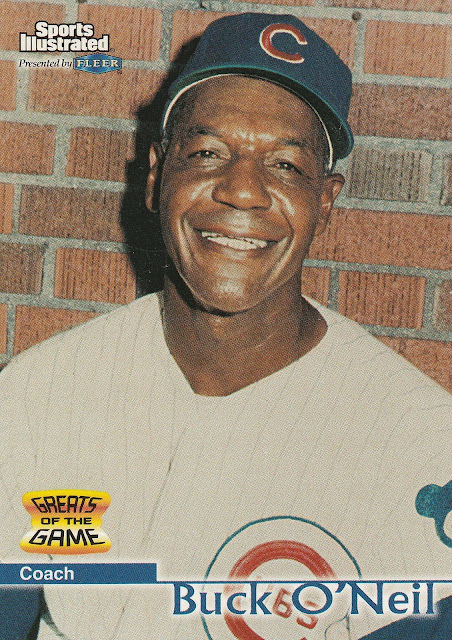 In 1955, The Kansas City Monarchs were sold, and if the integration of Major League Baseball in 1947 wasn't the end, the sale of one the league's most prominent and prestigious franchises to new owners certainly seemed like it. Buck O'Neil was the Monarchs' long-time manager, and he was also the team's lead scout. The story goes that Buck discovered and signed Ernie Banks, but in some ways, the opposite was true. Before the 1962 season, he went to the team's owner P.K. Wrigley and recommended Buck for a coaching position. He had been a scout for the team since leaving the Monarchs, helping the team sign players that they otherwise never would have found. As the first African-American Coach in MLB history, Buck was part of the Cubs' "College of Coaches" a hare-brained scheme to rotate managers so that no one manager felt too much stress. Unfortunately, the carousel never stopped when Buck's turn should have come, and it would be until 1975 before another African-American would get the chance to manage a team. 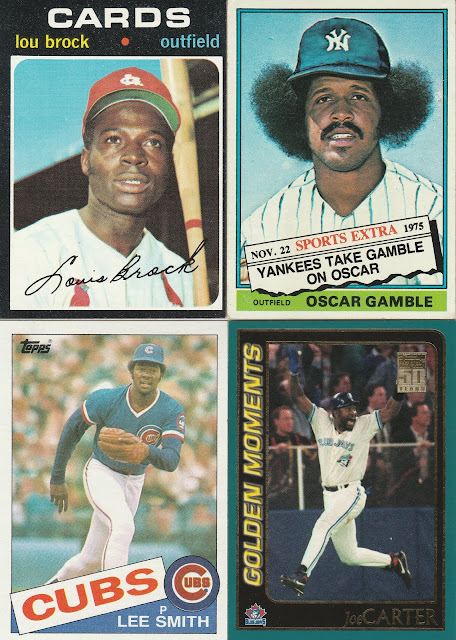 Over a dozen players that O'Neil scouted had big league careers, and here are some of the most notable signings. (Ernie Banks was already in the Cubs organization when Buck O'Neil was hired as a scout, the story that Buck signed Ernie to his first Cubs contract has more art than history to it.) So was Billy Williams, though Buck did visit Billy one weekend during his minor league climb and convinced Williams to keep at it, he nearly left baseball before his debut! 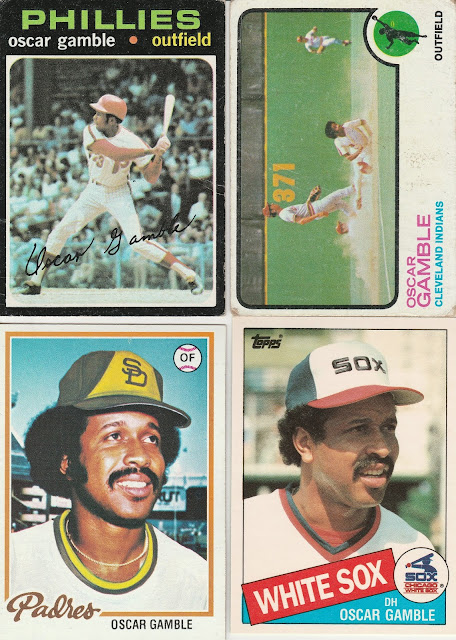 Oscar Gamble was a wiry, shy kid that O'Neil scouted more or less by accident. He found Gamble playing a pick up game of baseball with some other teens while he was trying to find a different field to scout another player entirely. He found out from Gamble where his next official game would be, and returned to scout him properly. Buck said that he only needed to see one at bat- a fly out, no less - to see that he was a special talent. Buck was right - Gamble would go on to a 17 year career and 200 homers. 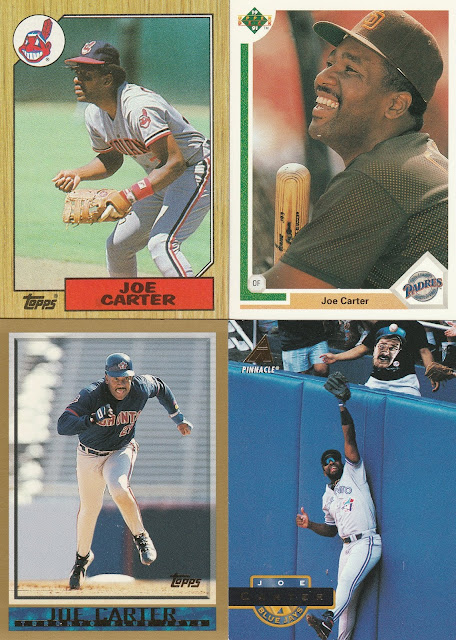 One of the last major signings that Buck made for the Cubs was a young outfielder by the name of Joe Carter. Carter had a much higher prospect profile compared to Gamble - Carter was the Sporting News' Collegiate Player of the Year in 1981. He was a 4 sport athlete in High School and as mentioned a standout College baseball player. On Buck's advice, the Cubs made Carter their first round pick in 1982. He would only spend 23 games in a Cubs uniform before being sent to Cleveland in a deal for Rick Sutcliffe. Carter would have a 16 year MLB career, including an unforgettable World Series Clinching homer in 1993. The 2 time world champion had over 2,100 career hits and 396 homers. 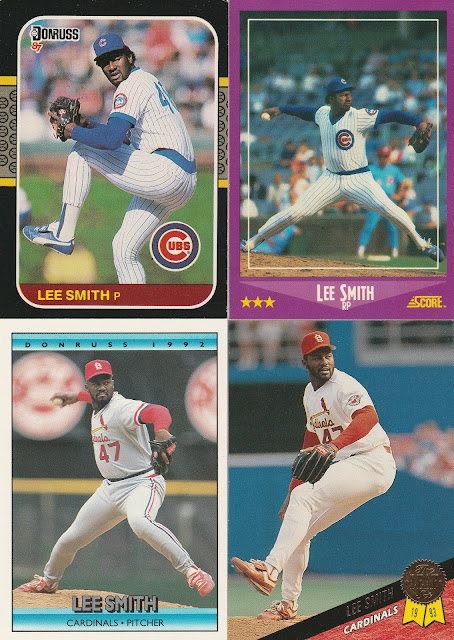 Lee Smith retired from baseball as MLB's All-Time Leader in Saves. He's been passed by many since, but Smith lays claim to being one of the games' best closers over from the mid 80s to mid 90s. Smith was scouted when he was just 17 from northern Louisiana, where he starred for his high school basketball team. He played on the softball team until his junior year, when the strength of his arm became apparent. He was drafted in the 2nd Round of the 1975 draft by the Cubs, and if not for the hefty $50,000 bonus offered by Buck, he may have opted to go to college on a basketball scholarship instead. Smith was a started for the first four years in the minors, but he found his calling in the bullpen for the Cubs. In 1983, he led the NL in Saves and had a 1.65 ERA striking out 91 batters in just over 100 innings. He made his first of 7 All-Star teams, and would save at least 25 games for the next 12 seasons. This past winter, he was selected by the Veteran's Committee along with Harold Baines to be inducted in the Hall of Fame. 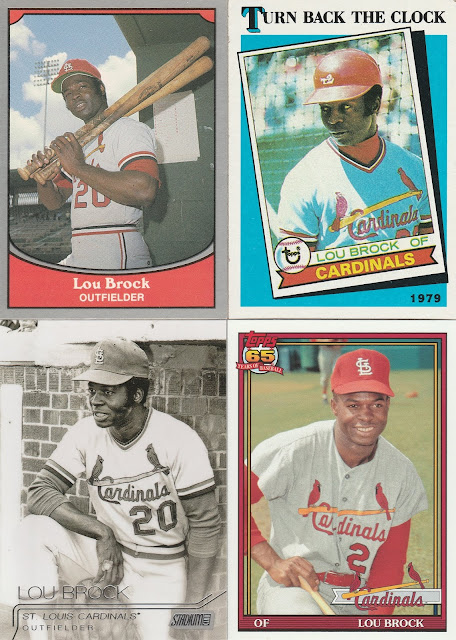 One of the greatest base stealers of All-Time, Lou Brock was the most successful player in the big leagues signed by Buck O'Neil. A member of the 3,000 hit club, Brock was a tremendous outfielder as well. The 2X World Series Champ was a 6X All-Star and an 8X stolen base leader. Brock was a Junior in college when he attended a major league tryout in Chicago that was attended by both the White Sox and Cubs. The Cubs and Buck O'Neil convinced him that the path to the major leagues would be quicker on the Northside, so he signed with the Cubs. After hitting .387 in the Instructional League in 1960, he tore up Spring Training in 1961, hitting an even .400. The Cubs still wanted to season him a bit, so he homered on the very first pitch he saw as a minor leaguer in St. Cloud, MN - he'd win the batting title that year in the Northern League, and would be in Wrigley field in 1962. The pitching starved Cubs made a critical blunder in 1964, trading Brock to the Cardinals for Ernie Broglio, who had a recent 20 win campaign. It turned out that his best innings were behind him, and Brock's best were to come. The Cardinals were World Series champs in 1964, in which Lou hit .300 with a homer and 5 RBI. They'd win it all again in 1967, thanks in no small part to Brock's .414 average, 7 steals, and home run over 7 hard fought games.

Buck would be hired later in the 80s as a scout for the Kansas City Royals, and was even named the 1998 Midwest Scout of the Year, though the big name players were less frequent. His contributions to baseball went far beyond the boxscore as a player with the Monarchs, or as their Manager. He is of course best known as an unofficial ambassador of the Negro Leagues, featured in Ken Burns' Baseball documentary. The stories that Buck had been telling for decades finally reached a wider national audience and the country finally started to learn and remember the history that had been written all around them for the last century.