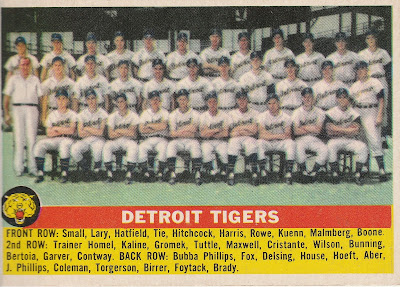 One of the fun things about a completed set is deciding how you want to organize it. I have the 1956 Topps set in a binder, sorted by team, in the same order that the teams finished in the 1955 Standings. In 1955, the Detroit Tigers finished in 5th place in the American League with a 79-74 record. 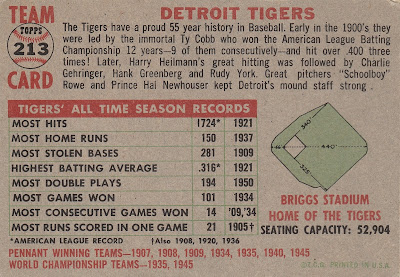 The 1955 Tigers had a winning season, and at first blush it may be hard to see how they finished in the "second division" 5th place out of 8 teams. A deeper look at the standings showed that the team beat up on Kansas City, Baltimore, and Washington - the three teams below them in the standings. Against the four other AL teams with a winning record, however, they were a combined 37 - 52. Five games above .500 may be good enough for a Wild Card today, but in the 50s it meant being closer to the cellar than the penthouse.


Despite A Once-in-a-Generation Hall of Fame outfielder and a good to great supporting cast around him, the Tigers would finish in 4th or 5th for the rest of the 1950s, and wouldn't win a pennant until 1968. The 1956 squad had two 20 game winners, and four batters hitting .300 or better, but the result was the same - a fifth place finish with just barely a winning record. 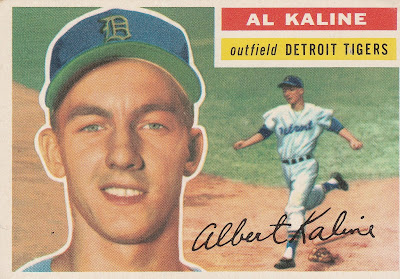 That talented outfielder was the 20 year old Al Kaline. In 1955, he became the youngest player to win a batting title, and had a ridiculous season offensively. He hit .340 with 200 hits, 121 Runs scored, 102 RBI and 27 homers. He made the first of 16 straight All-Star appearances (18 total in his career). In addition to the batting title, he also led the AL in hits and Total Bases. Pretty good for a 20 year old! 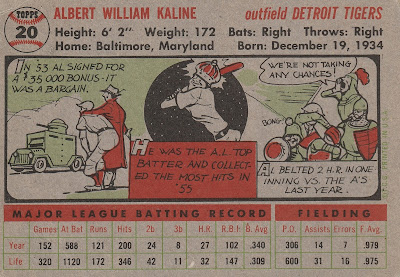 Kaline would play 22 seasons in a Tigers uniform. He's a member of the 3,000 hit club, finished with 399 homers, and scored over 1600 runs. His lone World Series appearance was a successful one - he batted .379 with a pair of homers in the series, which was won in 7 hard fought games by the Tigers. 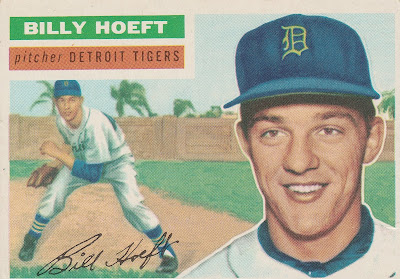 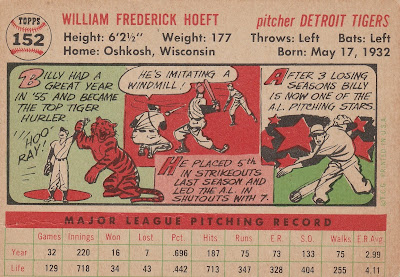 Hoeft would pitch for 15 MLB seasons, with his '55 campaign being the most successful. He finished with a 97 - 101 record and a 3.94 ERA. After a rough 1959 campaign, he would resurface as a reliever in Baltimore for several seasons. 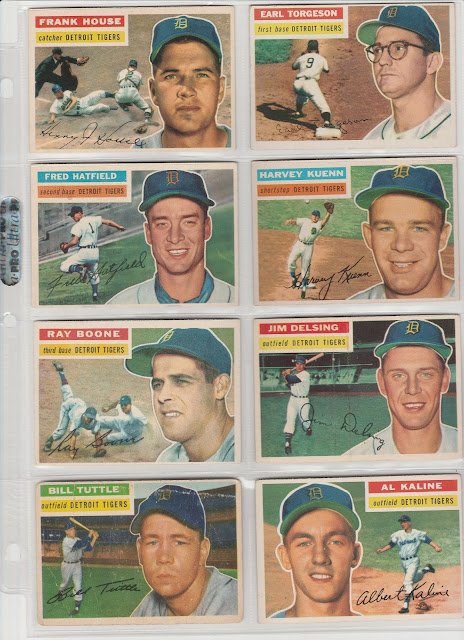 In addition to Al Kaline, Ray Boone and Harvey Kuenn were also 1955 All-Stars. Frank House added 15 homers as the team's primary catcher. Kuenn and Bill Tuttle joined Kaline by scoring over 100 runs, and the Tigers actually scored the most runs in the AL overall. 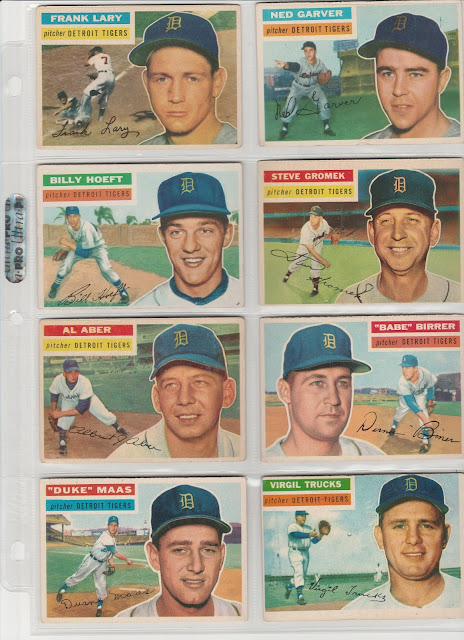 Frank Lary had a season almost as good as Billy Hoefts, though Lary was maybe a little less fortunate, pitching to a 14 -15 record. The rest of the rotation was below league average. Ned Garver and Steve Gromek were fairly homer prone, which inflated their ERAs. Al Aber and Babe Birrer platooned as a lefty/righty "closer" for the Tigers, each pitching about 80 innings and finishing 37 games combined. The 39 year old Virgil "Fire" Trucks came over for the 1956 season, and the pitching staff had a much better season overall. 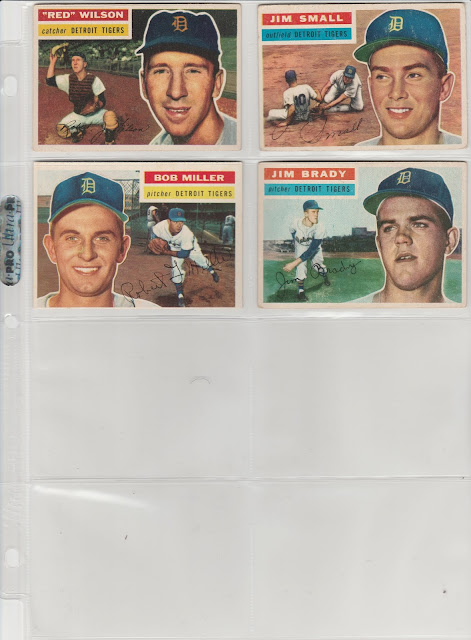 Here's the bench! One player that debuted in 1955, but isn't in this set, is future Hall of Famer Jim Bunning. Red Wilson was a decent backup in '55 and '56, providing better than average offense in limited playing time. As the 50's continued, the Tigers had very good teams, but the Haves and the Have Nots were so far apart that very good was never going to be good enough compared to the cream of the crop.