He Can Have Two Willie Mayses! Just Let Me Have Newk Back! 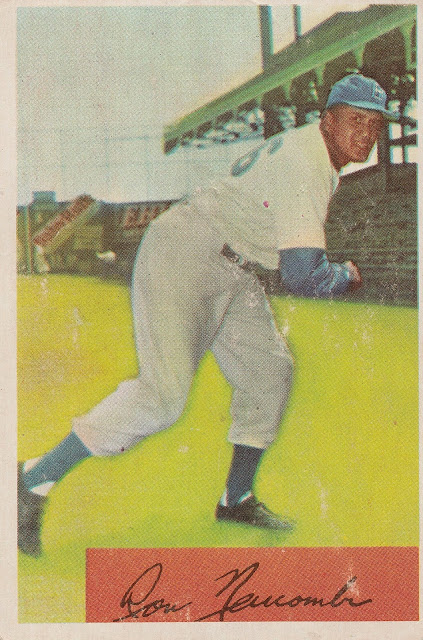 That was what Dodgers' manager Charlie Dressen exclaimed while missing his ace pitcher for two seasons while Mays, Newcombe, Ted Williams, and other MLB players went to serve in the Korean War. Leading up to the war, Newcombe won 56 games in 3 years for the Dodgers, including 20 games in 1951, the first African-American 20 game winner in MLB history. He only pitched briefly in the Negro leagues, parts of 2 seasons with the Newark Eagles, but he credits Eagles' owner (and Hall of Fame inductee) Effa Manley for her faith in him and credits the Negro Leagues as a whole for making it possible for him to have the success he enjoyed. 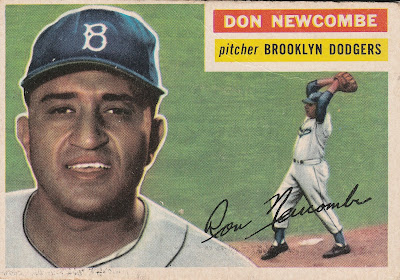 In the off-season after 1955, Newcombe went on a barnstorming tour co-headlined with Willie Mays. The team had Larry Doby, Hank Aaron, Monte Irvin in the Outfield with Willie. Ernie Banks in the infield, Roy Campanella behind the plate. Newcombe, Joe Black, and Brooks Lawrence pitched. It was to Mays "quite possibly the greatest team ever assembled" -- they went undefeated in 28 games against a variety of local teams and All-Star teams. 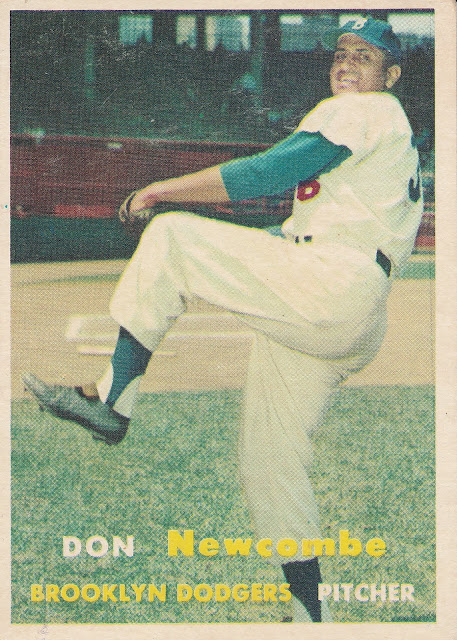 Following the 1955 World Series Championship run, and the successful barnstorming tour, Newcombe had a season for the ages. 27-7, 5 shutouts, winning both the N.L. MVP award and the Cy Young award (back when only one player from AL/NL combined won). Newcombe was also continuing his excellence at the plate - In 1955 he hit .359 with 7 homers, and followed it with 2 more round trippers in '56. 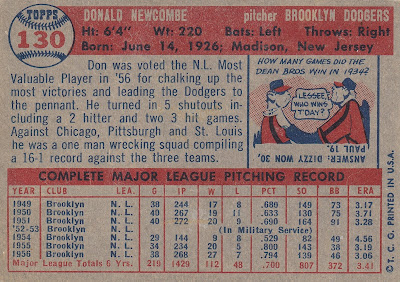 Newcombe would go from a fastball pitcher to more of a finesse pitcher, and like many players going through that transition, he had some growing pains. Mid-way thorough the 1958 season, he was traded to the Cincinnati Reds, and had to develop a new pitch-- a sinker -- to keep pace and regain some of the dominance that marked his work in the first half of the decade. 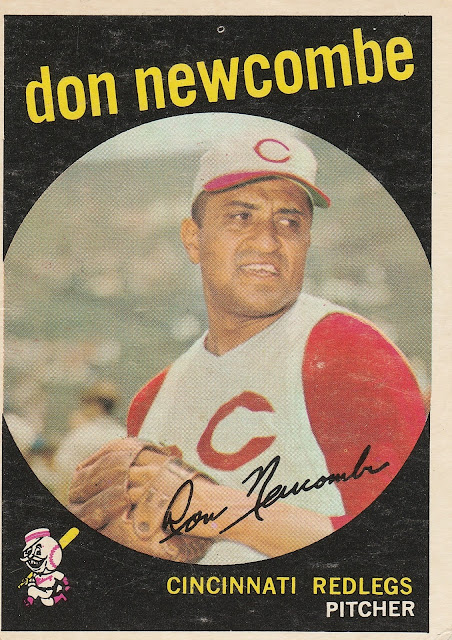 In 1959, Newcombe had another winning season, and contributed at the plate as well, hitting .305. He was even used in a pinch hitting role at times. He was even converted into a first baseman when he played in Japan in the early 1960s. 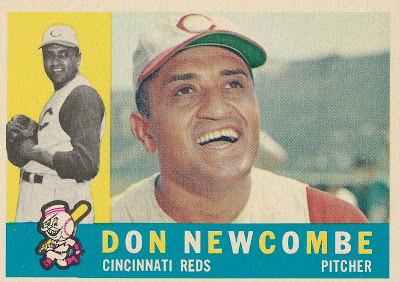 Newcombe was of course a tremendous baseball talent, but he is remembered for much more than his stats. He struggled with but eventually overcame alcoholism, which had been the cause of his break with the Dodgers, the break up of his first marriage, and ultimately led him to find a new path following his retirement in service to others. 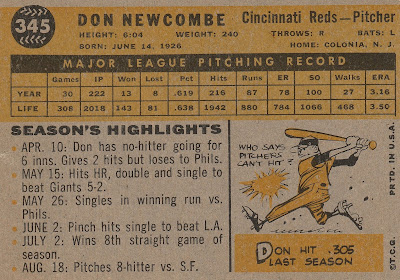 In concert with the company he founded in 1976, Don Newcombe Enterprises, and a reunion with the Dodgers in 1980, Newcombe would dedicate his life to the rehabilitation of people who were suffering from alcohol abuse.

On his website, Newcombe is quoted as saying "What I have done after my baseball career and being able to help people with their lives and getting their lives back on track and they become human beings again -- means more to me than all the things I did in baseball."