The Straw That Stirs The Drink 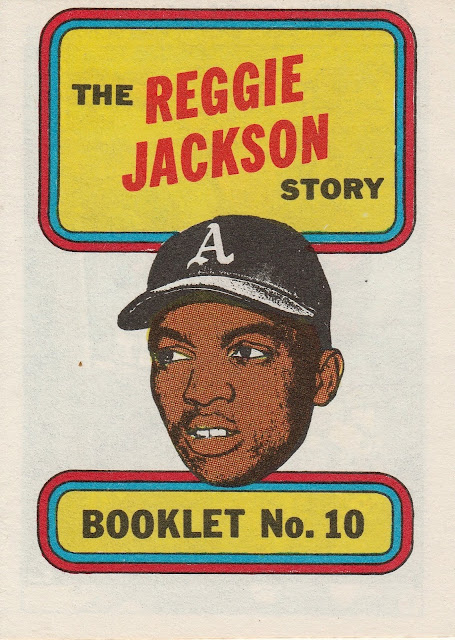 In 1969, Humankind reached the Moon, just in time to see one of Reggie's homers pass by Apollo 11's window. Just 23 years old, Reggie Jackson had already starred in college at Arizona State in Football and Baseball, and had moved with the A's from Kansas City to Oakland. That year made his first All-Star appearance, led the AL in Runs Scored, Slugging, OPS, Intentional Walks, and for the second year in a row, strikeouts. The strikeouts didn't bother Reggie, especially with a career high 47 Homers to go with them. He once said that "the most important requirement in success is overcoming failure. You must learn to tolerate it, but never accept it." 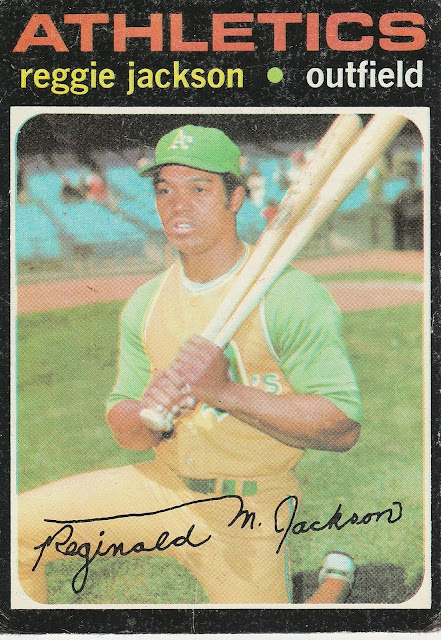 It was Reggie Jackson and the players that formed the nucleus around him were the first Athletics team to reach the post season since the team was managed by Connie Mack in the 1930s. In 1972, it was Reggie's surprise steal of home in game 5 against the Detroit Tigers that vaulted them into the World Series and setting the stage for Oakland's dynasty. "Just as nature fills a vacuum, Reggie fills a spotlight." -- Bob Marshall 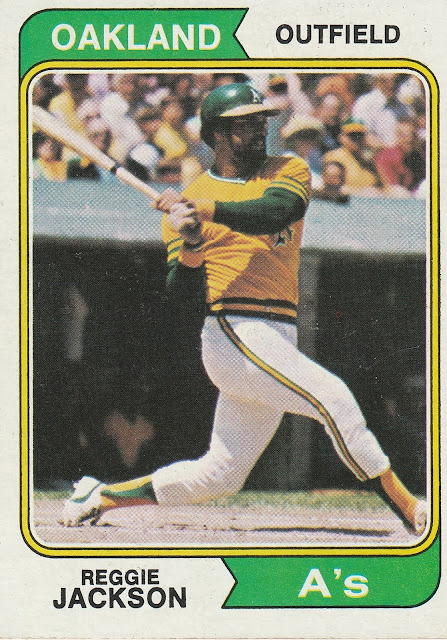 At the peak of the Oakland dynasty, Jackson was the centerpiece of a dynamic offense. In 1973, he was the MVP of the World Series, and MVP of the American League. He led the AL in Runs scored, Homers, RBI, Slugging and OPS. Playing against the legend Willie Mays and the New York Mets, Jackson would hit .310 in the seven game marathon. Facing elimination, Jackson drove in go ahead runs early and an insurance run later on in Game 6, and a back breaking homer in Game 7 to put the A's up for good. 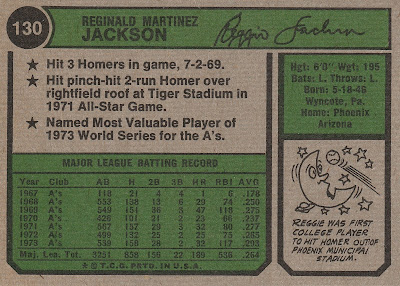 As an Oakland Athletic, Reggie walked the walk as much as the talked the talk. As the team succeeded and he found great personal success, he displayed the kind of swagger and bravado that would make him a household name. The team was barely holding itself together with in-fighting and a young MC Hammer spying on the players and relaying gossip to owner Charlie O. Finley. No, really. Jackson and the rest of the team's stars would have to endure the antics of the team owner and the low-ball offers he'd extend for new contracts. 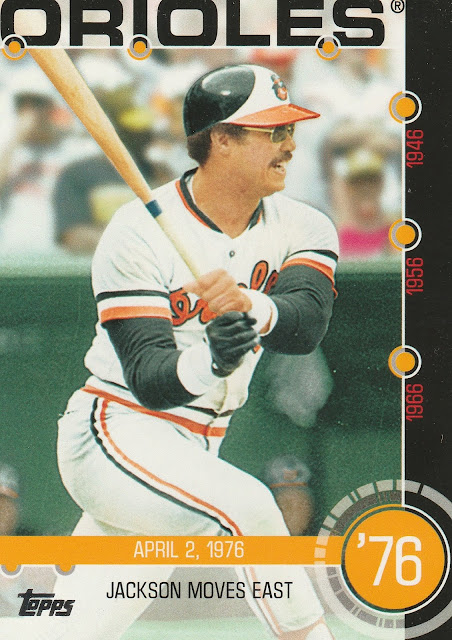 Jackson loved Oakland, with deep ties to his teammates and the community. Finley was not willing to pay the salary that Jackson would command in 1976 and beyond and the game's premier power hitter. Reggie was traded to Baltimore just before Opening Day, shocking the baseball world. His season with the Orioles was overlooked for a long time - Topps did not make a card with him in an Orioles unform until after his playing career - but the team would certainly take notice of his talents while he was there. Jackson would lead the team in homers, RBI, slugging, OPS... and stolen bases! He swiped 28 bags at an 80% success rate. He also had a personal best in homers - hitting one in 6 straight games during the 1976 season. The Orioles missed the playoffs - the only time that Jackson missed the playoffs from '71 through 1978. After the season, Jackson would be a free agent. "If I played in New York, they'd name a candy bar after me." 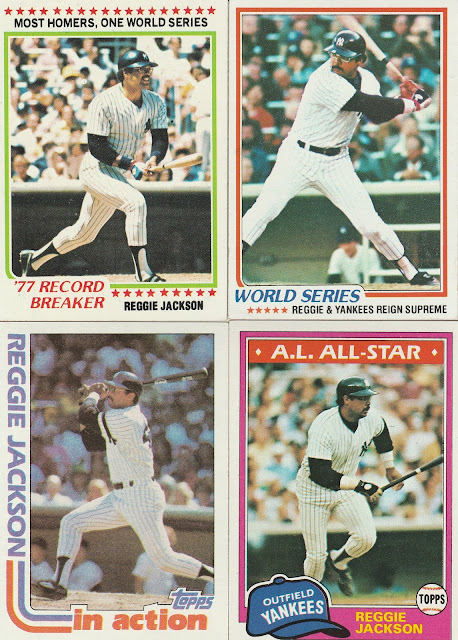 The Reggie Bar was apparently very tasty, if a little too similar to the Baby Ruth bar, but not nearly as sweet as the addition of Reggie Jackson's bat to the Yankees line-up. Not so sweet? his relationship with Billy Martin and Thurman Munson. The New York media had certainly picked a side early on, and drew a firm pinstripe in the sand after Reggie's interview with Robert Ward for Sport Magazine. Even before the magazine was released, the backlash was strong. It was in this interview that Jackson famously quipped "I'm the straw that stirs the drink." Despite the rocky relationship between Reggie and some parts of the Yankees clubhouse, the talent was clear, and winning breeds good team chemistry. It would be wrong to say that all was forgiven, but Reggie's 5 World Series Homers sure made the dugout atmosphere more relaxed. Jackson was of course the MVP of the 1977 World Series, and the team would repeat again in 1978 as Champions. His heroics would earn him the nickname "Mr. October." Jackson would continue to lead the team offensively into the 1980s. 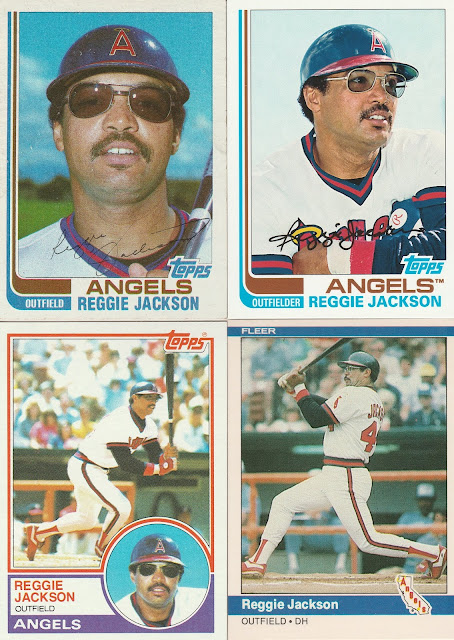 My first exposure to Topps Traded cards was Reggie's bespectacled mug in a California Angels helmet. When Gene Autry heard that Jackson was willing to play out west again once he became a free agent, he made sure to make Reggie a big offer, giving the 35 year old a 5 year deal. Can you imagine a contract like that today? Reggie would help the Angels to 2 more playoff appearances, though he would not reach the World Series again in California. He would retire following one last season with Oakland in 1987.