Taking the lead from Tony at Off-Hiatus Baseball Cards this will be the eleventh of 30 posts, using the prompts provided. I won't necessarily post one every day, but I will do one for each card, toss in a few "insights" (as insightful as I can be, anyway), and usually include an honorable mention or two, just because I'm like that. 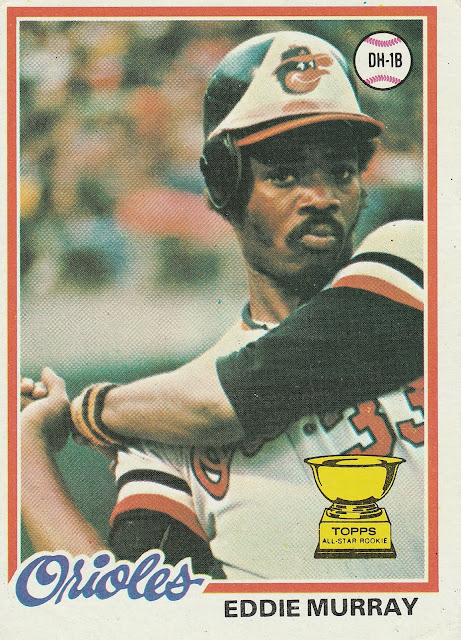 Here's my pick - It was coming down to Murray or another Topps All-Star Rookie, 1971 Topps Thurman Munson. I looked at this card and thought... "Do I want to be the one to tell Eddie I picked Munson's card instead?" The answer was no, I did not. This was one of the few cards that survived from my first round of collecting. I bought it at Shinders (a local card shop / newsstand) very late in my youth, if that makes sense. It was a rare occasion that I spent money on a single card instead of a set or a pack of new cards. But Eddie had just recently reached 3,000 hits and I was in the market for something special for one of my favorite players. 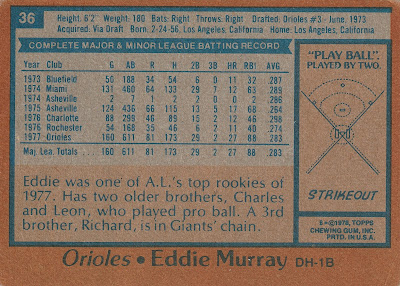 Since these are basically one card posts, why not show the backs, too? Man, that is an impressive rookie campaign! I had forgotten about his brother Rich, but he has a couple cards as well. One of the more impressive things about Steady Eddie is that his rookie season was pretty much exactly the numbers you could pencil in for him for the next 15-20 years. 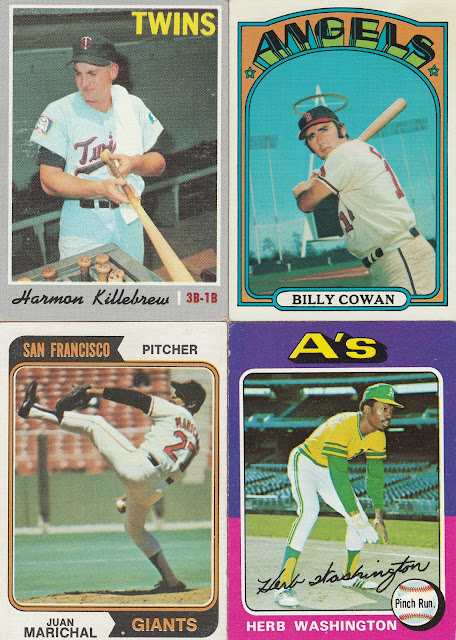 I already mentioned the 1971 Thurman Munson card, so I'll show some different ones here. Killebrew is fresh off his MVP season, and looks every bit of a Hall of Famer here. The 1970 set is starting to grow on me a bit, more than any other Topps set in the 70s, the photo is the focus. Of course, The Billy Cowan Halo card is a favorite. The Topps photographer had a stroke of genius setting this one up. Juan Marichal's final Topps card as a player is my favorite card featuring the Hall of Fame Hurler. It captures his unique delivery in the way that few cards had attempted before. Herb Washington's card is a little gimmicky, but that doesn't bother me. I should also mention that one of my favorite sets of the decade isn't from Topps, it's the 1976 SSPC set. I guess the SSPC sets and TCMA sets could be called oddball sets, but the often high quality photos (usually with no text on the front) and detailed copy on the backs really stand out.
Posted by Brian at 5:31 PM