Taking the lead from Tony at Off-Hiatus Baseball Cards this will be the tenth of 30 posts, using the prompts provided. I won't necessarily post one every day, but I will do one for each card, toss in a few "insights" (as insightful as I can be, anyway), and usually include an honorable mention or two, just because I'm like that. 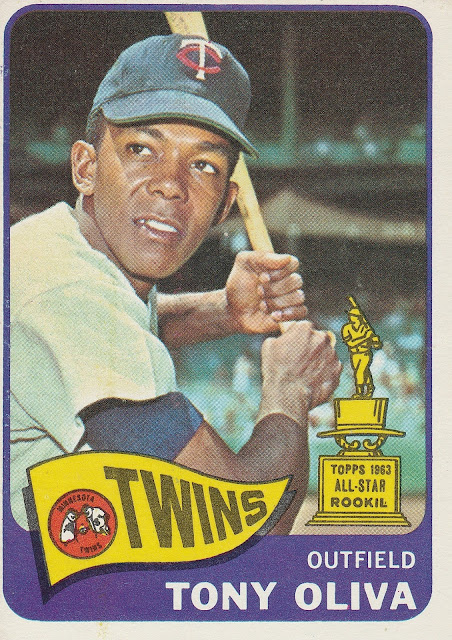 Here's my pick - I thought picking just one card from the 1950s would be difficult, the 60s was also tricky. Tony O's first solo card of his career came on the heels of winning the A.L. Batting Title and being named rookie of the year. The 1965 set is my favorite design of the decade - I completed the O-Pee-Chee set, as well as the Heritage sets in 2014 that used the same look. This card in particular may be the one that pushed me over the edge to get all the Topps All-Star Rookie cards. 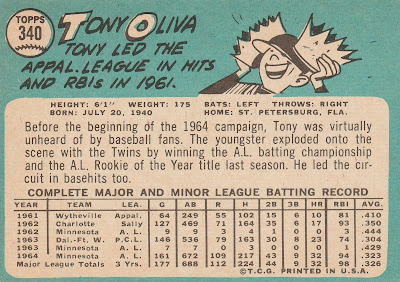 Since these are basically one card posts, why not show the backs, too? Pretty impressive that winning the batting title and hitting .323 actually lowered Oliva's career average. If not for bad knees and a balky back, Tony O would be in Cooperstown already.

Oh so many honorable mentions! 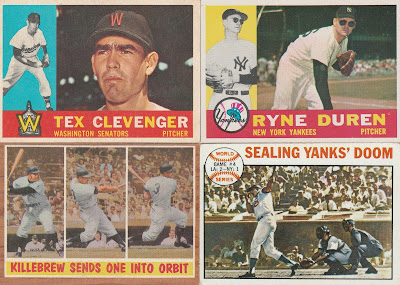 Horizontal sets came back in 1960, then disappeared again. But Topps continued to churn out some great horizontal cardboard. Ryne Duren has a few awesome cards, where he's rocking shades in both the main photo and the inset. The triptychs in the 1962 set like the Killebrew above make for a very nice 10 card subset. The World Series sets are a personal favorite, and "SEALING YANKS' DOOM" will always get my attention.
I ranked the 50s, so let's do something similar for the 60s. 65 is my favorite, then 61, 64, 60, and 63. The rest are kind of bunched at the bottom of the list, but I think I just need to see some more from 62 to decide for sure. 67, 68 and 69 have some great cards, but lots of bad ones. All the hatless players make sad. 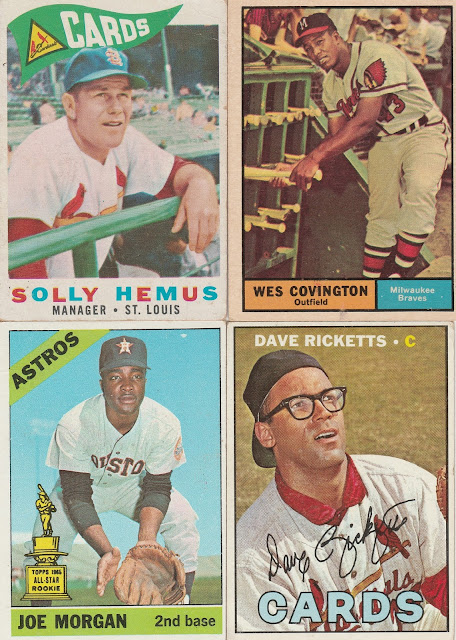 The 1960 managers were a hint of things to come in 1965, Wes Covington's 1961 card is the '57 Valo of the 1960s, The Topps All-Star Rookie set looms large in 60s, even though Topps seemingly messed it up every year by missing one or more of the award winners... And Dave Ricketts was the most athletic hipster until James Harden.

I know I am only supposed to pick one card, so officially the answer is Tony O, but these are all winners in my book.
Posted by Brian at 6:22 PM