Day 3: A Card From The First Set You Tried To Complete

Taking the lead from Tony at Off-Hiatus Baseball Cards this will be the third of 30 posts, using the prompts provided. I won't necessarily post one every day, but I will do one for each card, toss in a few "insights" (as insightful as I can be, anyway), and usually include an honorable mention or two, just because I'm like that. 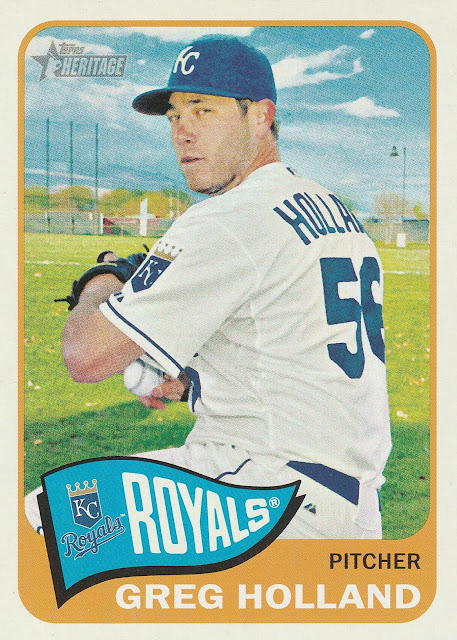 Here's my pick- you might be saying, 2014? Really? Well, to be honest, as a kid I really wasn't a set builder. When I returned to the hobby in 2014, the idea of putting together a set (something I never gave much effort or thought towards as a kid) seemed really appealing. Toss in a classic design, and high quality cardstock and I was sold. Oh. Why Greg Holland? A couple reasons. First, this seemed like a throwback pose, it reminded me of the original 1965 Topps set. Also, this was one of the last batch of cards that I added to the set, one of the dreaded Short Prints! 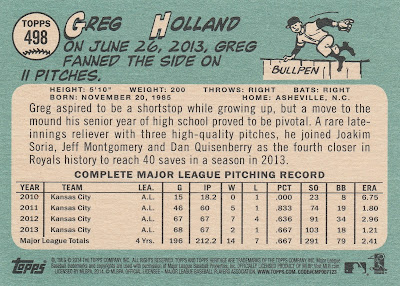 Since these are basically one card posts, why not show the backs, too? The cartoon is still there, they did a decent job of emulating the 1965 backs, even with all the extra small print that the modern era deems necessary. 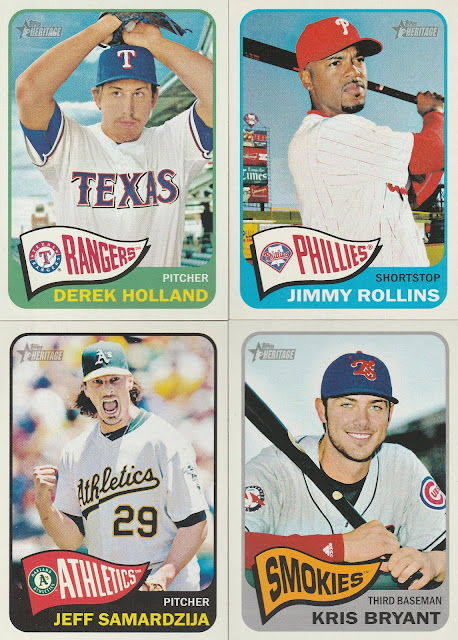 Another Holland Short Print- Derek seems to get what the whole Heritage set is all about. Jimmy Rollins has one of my favorite cards in the set - another classic / callback pose, and there's a sweet scoreboard with ads in the background. I was so pumped about completing the regular set that I also purchased the "High Numbers" set, which included the somewhat odd visual of The Shark from the other side of the Bay. At that point I was all in, so I also built the minor league set. I wonder if that Bryant kid is going to do anything interesting in the future....
Posted by Brian at 6:27 PM