Day 8: A Card That Reminds You of a Family Member

Taking the lead from Tony at Off-Hiatus Baseball Cards this will be the eighth of 30 posts, using the prompts provided. I won't necessarily post one every day, but I will do one for each card, toss in a few "insights" (as insightful as I can be, anyway), and usually include an honorable mention or two, just because I'm like that. 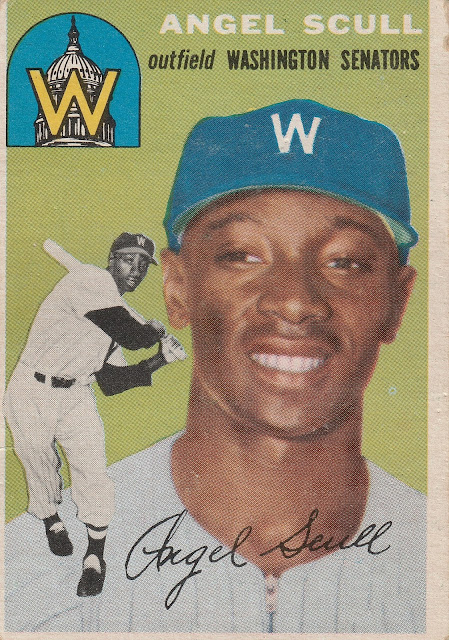 Here's my pick - I shared a post about this card (well, the back of this card) in my first month of blogging. This was actually my first vintage card ever, and it was given to me by my brother. He used to work at a card shop / magazine / newsstand called Shinders in Minneapolis when I was a kid, and he'd often bring things home, either to share with me or rub in my face. He had a copy of his own, and he gave me this one for my birthday right around the time I stopped collecting the first time. I didn't appreciate it then as much as I do now. 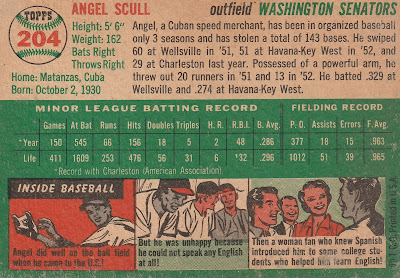 Since these are basically one card posts, why not show the backs, too? I will say that our affinity for this card is due in no small part to the unintended comedy of "Angel, a Cuban speed merchant," as a teenager that was especially funny to me. "Possessed of a powerful arm," was also a fantastic phrase. I've built up a decent vintage collection over the last few years, and this card was the foundation. 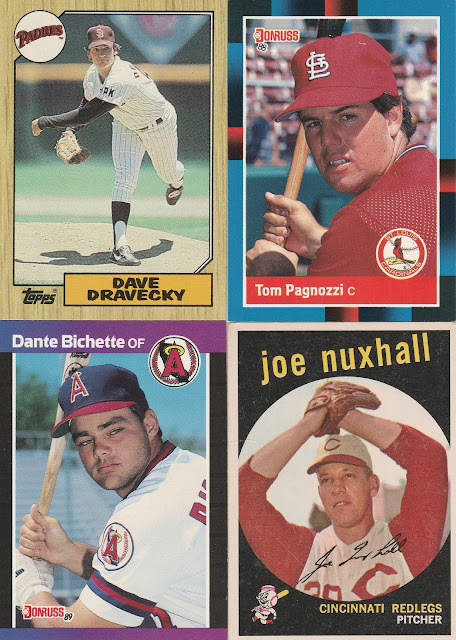 Pretty much any 1987 Topps card would work, these remind me of my cousins in Ohio - my first ever trade was with some of these cards. Their Twins for my Reds! Tom Pagnozzi reminds me of my other cousin in Minnesota, I distinctly recall opening packs of 1992 Pinnacle and he pulled a Tom Pagnozzi. I may have confused Pagnozzi with Todd Zeile- I remember being jealous that my cousin found such an awesome card, which in hindsight was not quite so awesome. In 1989, my brother brought home a box of Donruss from his store for Christmas. No Ken Griffey, Jr. but there were plenty of Mark McLemores and Dante Bichettes. Finally, any vintage Reds remind me of my dad, even though he says he didn't collect cards as a kid - 1950s Topps would have been the cards that would have been around those days.
Posted by Brian at 6:35 PM