Day 7: A Card You Bought in Person and the Story Behind It

Taking the lead from Tony at Off-Hiatus Baseball Cards this will be the seventh of 30 posts, using the prompts provided. I won't necessarily post one every day, but I will do one for each card, toss in a few "insights" (as insightful as I can be, anyway), and usually include an honorable mention or two, just because I'm like that. 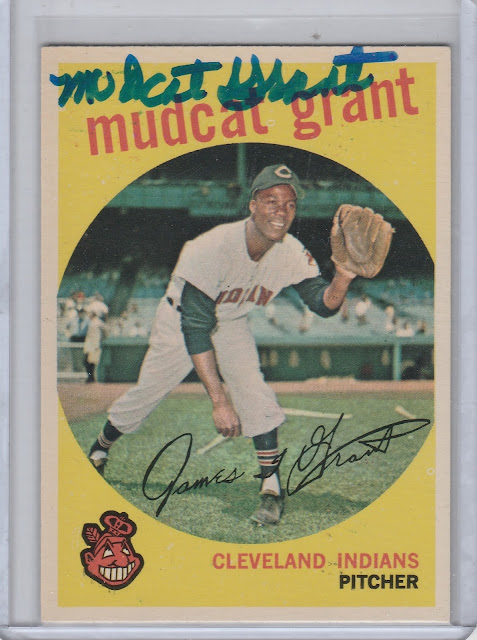 Here's my pick - I made a post about this one back in January of 2016, when I attended TwinsFest. I was really bummed out that my favorite player Kennys Vargas was not going to be there (He was on the schedule when I purchased my ticket, but a few days later he was removed from the list), but I had plans to get Glen Perkins and Kurt Suzuki to sign some things, so the day was not a total wash. Suzuki was in the very first round of players on the day, so I was kind of wandering around the vendor tables aimlessly while I waited for Glen Perkins to arrive later in the day.
I assumed that Suzuki and Perkins would be the only autographs I would try to get at the show (they were the two players I actually brought things to sign), but out of curiosity I checked the schedule again, and I'm really glad I did. The line was already forming for the next group. It was then that I noticed that the table would include Jim "Mudcat" Grant, signing autographs for just $5! 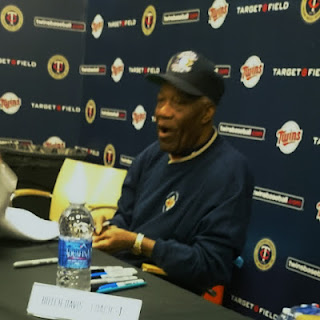 The only problem-- All my vintage was at home. It's not like I carry all my cards with me everywhere I go. So, I had a very simple goal - to find the very best Mudcat Grant card of all-time (in under 10 minutes). I made a bee-line for one table in particular, having purchased vintage from this vendor many times before. No Luck! I went to two more tables before I found it staring right back at me.
Normally when I buy I card I already own, I kick myself for not updating my lists, or not checking them before buying. This time I did it on purpose. The 1959 Topps card is the only one that shows Grant as Mudcat instead of Jim. A fair consolation would have been his 1972 Topps card with the A's, but this was the one I wanted him to sign. I waited in line about 90 minutes to get Grant's auto. I was towards the end of the line that started forming about half an hour before the signing session started, and I joined it after A) realizing Grant was there and B) finding a card for him to sign.
But it was totally worth it. As the line snaked back and forth, I would get closer to the table, then farther away. He was a great sport, very patient with the adults. But you could tell that he preferred signing for kids much more. The kid in front of me was 6 years old (Mudcat asked him his age) and the two of them had a great short conversation. He'd been signing autographs for nearly an hour by that point, so I was glad that a younger collector was in front of me. When I got to him I didn't say much other than thanks for coming to Twinsfest and thanks very much for the autograph. 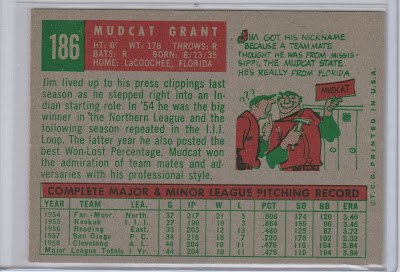 Since these are basically one card posts, why not show the backs, too? This card might actually be an upgrade condition-wise over the card with my other '59s. 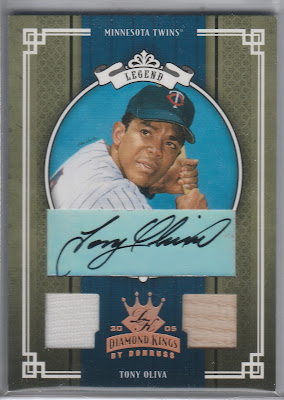 I picked this card up on Saturday at my local card shop. I wanted to find a sorting tray, which I found out about from the Sport Card Collectors blog. I was able to get a tray for just a few bucks, and I was happy to get it at the shop instead of online. Not a particularly interesting story, but now I am having a really exciting week sorting cards!
Posted by Brian at 5:57 PM