Taking the lead from Tony at Off-Hiatus Baseball Cards this will be the ninth of 30 posts, using the prompts provided. I won't necessarily post one every day, but I will do one for each card, toss in a few "insights" (as insightful as I can be, anyway), and usually include an honorable mention or two, just because I'm like that. 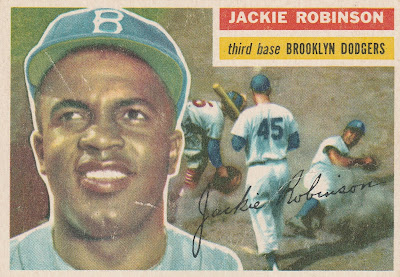 Here's my pick - and let me tell you, this was an easy choice, but also a very difficult choice. There are so many great cards from the 1950s; classics and icons and hidden gems literally of all shapes and sizes. The 1956 set is definitely my favorite set of the decade, and this card in particular is stellar. This is my favorite Jackie Robinson card, so it was an easy choice for this challenge. 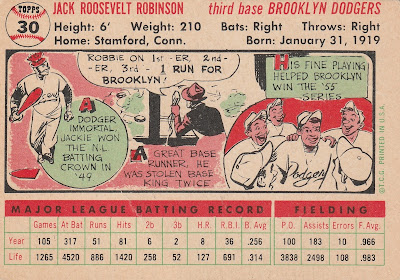 Since these are basically one card posts, why not show the backs, too? A Dodger Immortal, indeed. This was his final Topps card from his playing career, but it doesn't show his full stat line. He retired when the Dodgers traded him to the Giants before the start of the 1957 season. Since his retirement came in December of 1956, it was early enough that Topps hadn't printed any cards of him for the 1957 set. I think I've seen a few customs out there using the 1957 design. 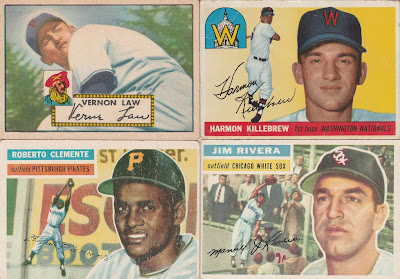 Yikes, where to begin? A quick and dirty ranking of the 50s Topps sets for me would be 56, 57, 59, 52, 54, 55, 53, 58. 51 gets an incomplete. I could probably make a case for any card from 1956 as an honorable mention, but I threw out a couple great defensive plays to counter Jackie's play at the plate. The 1952 set in my opinion is saved by the horizontal cards. Most of the vertical cards are very similar (not quite Donruss level boring), but the horizontal cards feel like carefully planned works of art. Vern Law's card makes him look like a giant. I had to include the Killebrew card as a shameless homer pick. 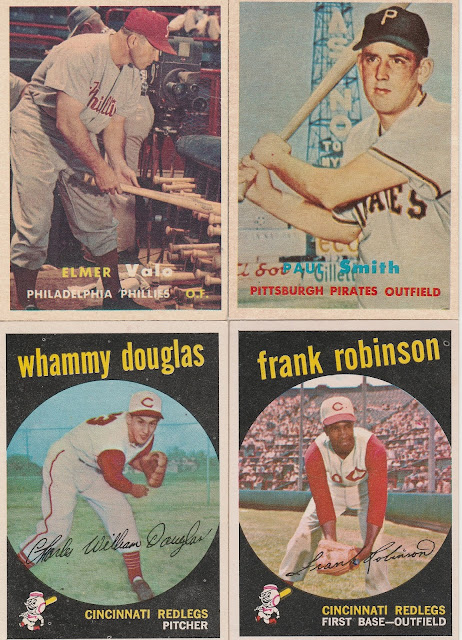 I think the 1957 set is the Stadium Club of the 50s. Yes, there's a border, but no other set from the 50s gives you more of the ballpark, or a bigger image. There are coloration issues, but I have to highlight the set in a post about favorites of the 1950s. The main reason that Elmer Valo isn't up there as the #1 pick is that I feel like a broken record about the greatness of his 1957 Topps card. Jackie is there because I love the card, and I haven't talked it to death. Bowman doesn't get as much love in this post, but a couple favorites might be the 1955 Eddie Waitkus card, the 1955 Aaron and Minoso cards are great as well. I have been focusing on Topps to this point, I should spend some time once I finish the 56 Topps set to stock up on Bowman.

I also want to point out that I am a little jealous of the Pirates - they've got so many great cards in the 1950s!
Posted by Brian at 6:26 PM