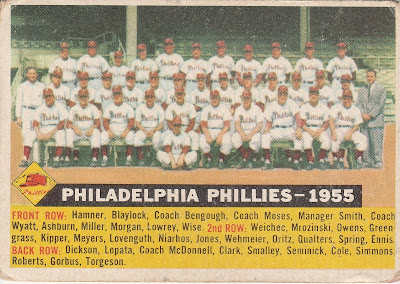 One of the fun things about a completed set is deciding how you want to organize it. I have the 1956 Topps set in a binder, sorted by team, in the same order that the teams finished in the 1955 Standings. In 1955, the Philadelphia Phillies finished in 4th place in the National League with an 77-77 record. 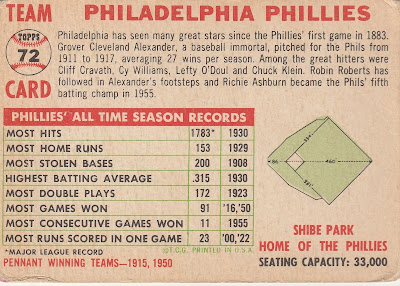 1955 was a season of firsts in Philly - the first season without the Athletics, so the first season where the Phillies were the sole baseball tenant of Shibe Park / AKA Connie Mack Stadium. To make the stadium their own, the Phillies bought an electronic scoreboard from the Yankees. They would remain in Shibe Park until 1970 when Veterans Stadium opened. It was the first year for manager Mayo Smith, who would be the team's manager for the next three seasons. The Phillies also christened a new Spring Training home, 1955 was the first year in Clearwater, Florida. It was also the first season as a fan for Catalina Rolon, who moved from Puerto Rico to Philadelphia that year. In 2018, she was honored by the team on the field with a custom jersey #103 which represents her age. The new scoreboard pops up around 1:07 on this video slideshow of Shibe Park / Connie Mack Stadium.


Since the 1950 "Whiz Kids" season, the Phillies slid back to the middle of the pack in the National League, and once again in 1955 finished at exactly .500 with a 77-77 record. The following year, the team would fare even worse, dropping to a losing record and a 5th place finish. They would struggle despite a Hall of Fame outfielder and Hall of Fame pitcher and not progress to the postseason until 1976. 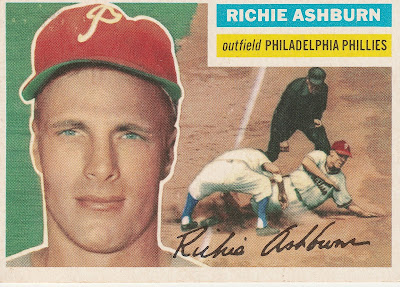 The Phillies' best hitter in 1955 was their perennial All-Star outfielder, Richie Ashburn. He would win the first of his two career batting titles in 1955, also leading the NL with a .449 OBP. Ashburn was primarily a contact hitter, with just 3 homers during the season, to go with 10 stolen bases. 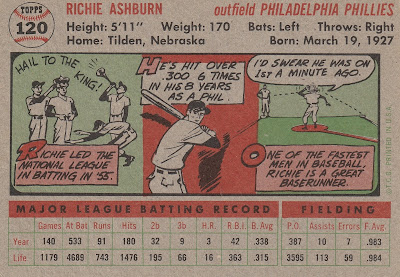 Ashburn for his career hit just 29 home runs, though he did consistently hit over .300 and led the league in base hits 3 times. In his rookie season he was an All-Star and led the NL in stolen bases. He was also blessed with great patience at the plate, leading the league in walks four times. He was selected to the Hall of Fame by the Veteran's Committee in 1995. The BBWAA never voted higher than 42% for his induction. This was likely due to his shorter career and almost non-existent power. 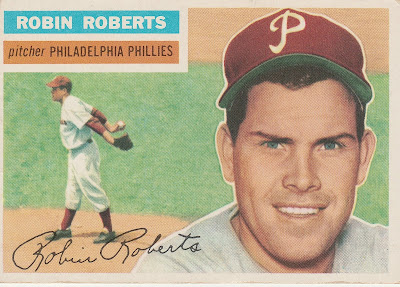 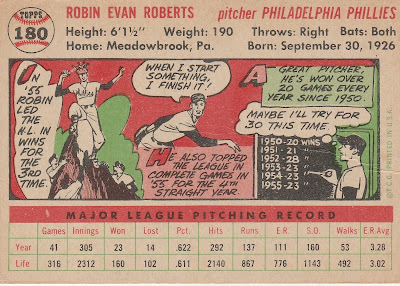 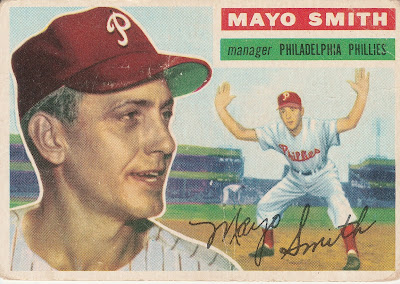 The "rookie" Manager of the Phillies was the affable Mayo Smith. While he had a good deal of success in the Yankees' minor league system, he was a relative unknown in major league ranks. His hiring was met with skepticism from the Philly press and from fans, who were hoping for a more well-known name. In the years before and directly after his tenure, the team would plummet to the cellar of the National League, but under his stewardship the team was closer to the middle of the pack, twice finishing with a .500 record. 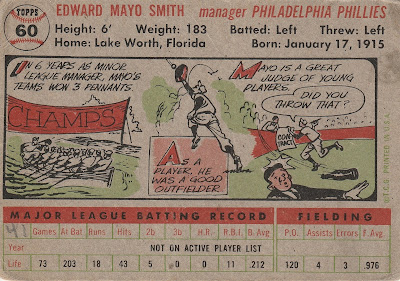 I had to share the Mayo card for the hilarious cartoon on the back. Can you picture a Philly fan beaning an ump with a bottle, and then the coach runs out to sign them to a contract? Mayo Smith had a rough ride in Philly as the team wasn't very good, but he'd find more success in Detroit, including a World Championship in 1968. 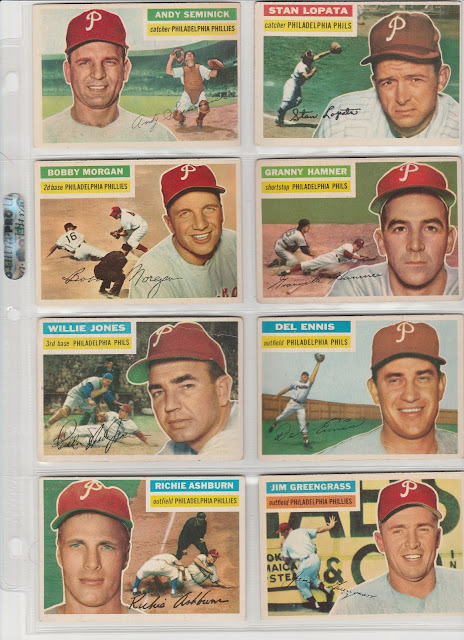 The big power bat in the Phillies lineup was Del Ennis, who slugged 29 homers in 1955. There were 22 more homers from Stan Lopata, who played all over the field, but primarily at first base. The 1956 set included a lot of nicknames, but omitted the nickname of 3rd baseman Willie "Puddin' Head" Jones for some reason. Missed opportunity! 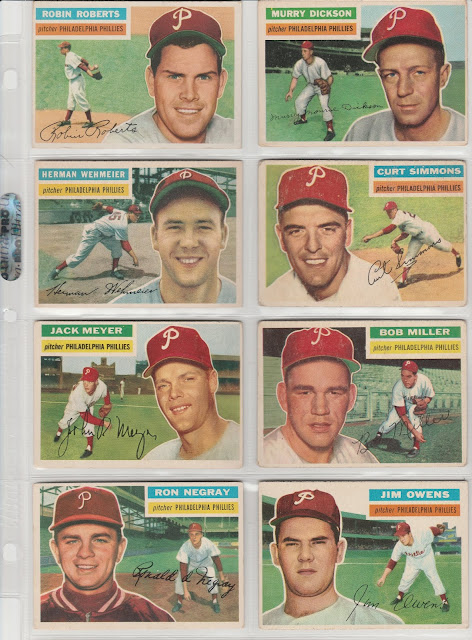 In addition to Roberts, reliever Bob Miller was highly effective. Miller pitched to a 2.41 ERA over 40 games, giving up just 6 homers over his 80 innings of work. Jack Meyer was the team's closer, saving 16 games and starting 5 in 50 total appearances. Lefty starter Curt Simmons was recovering from arm troubles in 1955, but would bounce back in 1956 with a 15 - 10 record. He'd go on to pitch until 1967 with 193 victories. 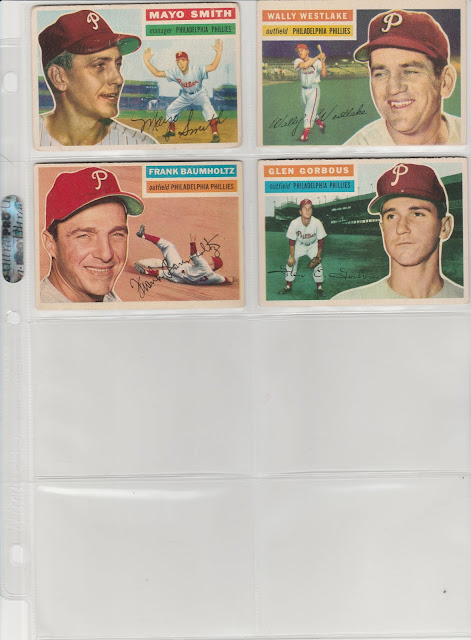 Rookie Glen Garbous, along with veterans Wally Westlake and Frank Baumholtz were added to the Phils for the 1956 season. Westlake would appear in just 5 games. Baumholtz, who nearly won the 1952 batting title, would provide some pinch hitting and rare defensive assistance in RF, with just 112 plate appearances in 76 games. Garbous came over during the '55 campaign, playing in 99 games, but would be used sparingly afterwards, getting into just 18 more games in the next 2 seasons. Missing from the 1956 set is the Phils' primary first baseman, Marv Blaylock.