March is Women's History Month. I don't have many cards featuring women that played or contributed to the history of baseball, but I'll make a few posts as the month goes on highlighting some of the women that have been a part of baseball's story over the years. 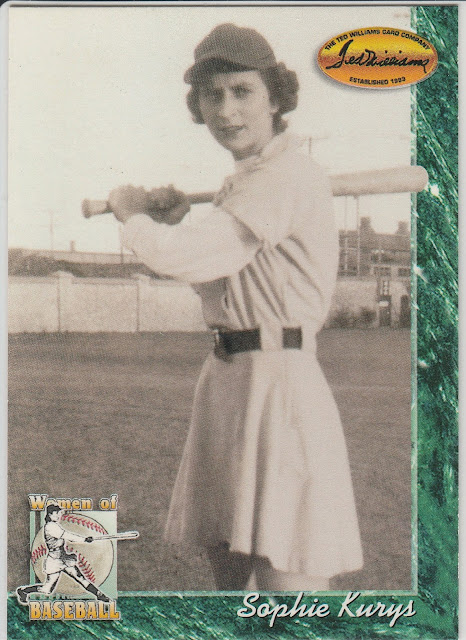 She was called "The Flint Flash" and "Tina Cobb." Sophie Kurys was born in Flint, Michigan in 1925, and excelled in track and field, basketball, tennis, swimming, and was an avid equestrian. Participating in the Flint, MI Pentathlon in 1939 (she was 14), she scored 4,693 points out of a possible 5,000.  From a young age, Sophie was also the best softball and baseball player in Flint. In April of 1943, she heard about a tryout being held in Flint by a scout from Chicago, looking to form a new women's baseball league. Even though the cold and snowy conditions confined the tryout to a small gym, Kurys was able to demonstrate her hitting and fielding skills. She was invited to Wrigley Field in Chicago to attend the final tryouts. This time, there was room to run. 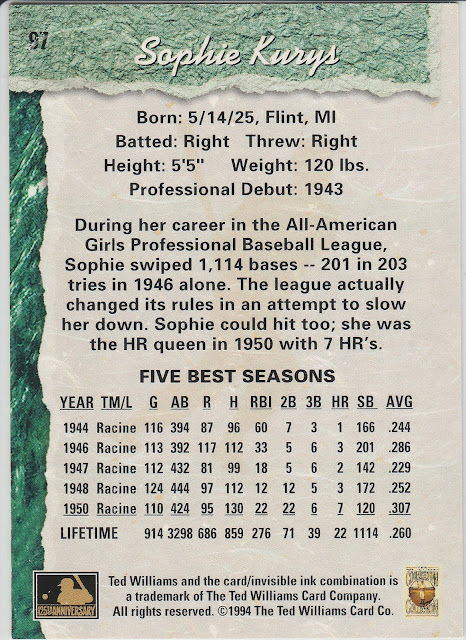 Kurys was far and away the greatest base stealer in professional baseball history. Rickey Henderson may have a valid argument for the greatest of All-Time, but before he came along it was Sophie by a country mile. Take 1946, for example. Sophie stole 201 bases in 203 attempts, a record for all professional leagues. That season, Sophie led the league in steals, obviously, but also set the all-time record. She also led the league in walks, runs scored, and fielding percentage at 2nd Base, leading to an MVP season. Her .286 batting average was 2nd best in the league. The balls used by the league were smaller than a softball, and would be modified each year. By the 50s, it would much more closely resemble a major league baseball. Until this time, the ball had a plastic core instead of cork, meaning that it did not travel as hard or as fast. This limited batting averages in the league throughout the 40s.

Her career record of 1,114 stolen bases is surpassed only by MLB Hall of Famer Rickey Henderson, who played 25 seasons. Sophie stole hers in just 8. Only 3 people in the world have stolen over 1,000 bases - Henderson in MLB, Yutaka Fukamoto in NPB, and Sophie Kurys.

She led the AAGPBL in Runs Scored 6 times, stolen bases 7 times (every year except her rookie season), and is the All-Time Career leader in both categories in league history. She finished 3rd All-Time in Hits and 2nd in Walks. She was a 4-time All-Star (they only held 5 All-Star Games during her playing career), in 2013 she was elected to the National Women's Baseball Hall of Fame.