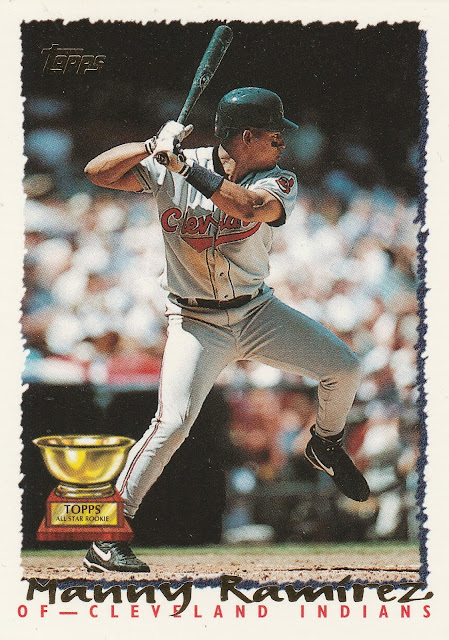 Every team he played for had a "Manny Being Manny" story. Whether it was leaving his paycheck behind in his cleats on a road trip, or leaving the field of play to use the restroom inside the Green Monster. Manny Ramirez was a player who moved to the beat of his own drummer. Antics aside, Ramirez would show from his rookie year on that he was one of the best hitters to ever play the game. 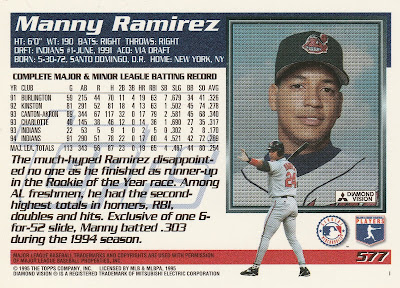 He was a pre-season lock to be the 1994 AL Rookie of the Year, and while he didn't quite meet that expectation, there was little reason to think that he was anything less than a budding superstar. He played in just 91 games in the strike shortened season, ranking 2nd among rookies in Homers, RBI, Doubles, and hits. 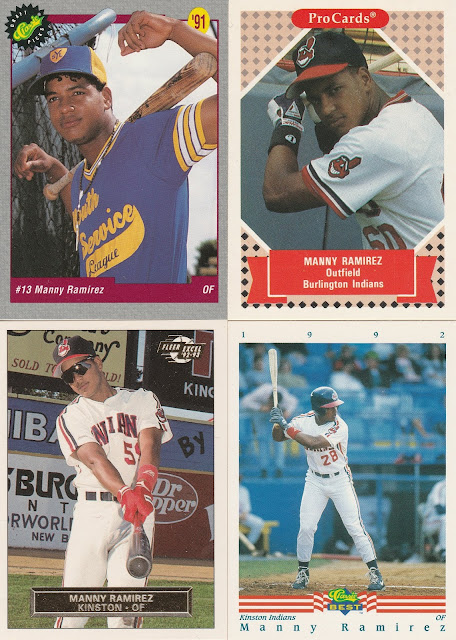 Ramirez was born in Santo Domingo, Dominican Republic, but attended high school in New York City. His family moved to NYC when Manny was 13 years old, and by the time he was a high school Senior at George Washington High school, he was already a legend among those that had seen his offensive prowess. His Senior year, he batted .650 with 14 homers in 22 games. He was a first round draft pick of Cleveland, and made a steady climb up the minors, hitting double digit homers at each stop along the way. Across AA and AAA in 1993, Manny hit .333 with 31 homers and 115 RBI. By 1994 he was ready for the show. 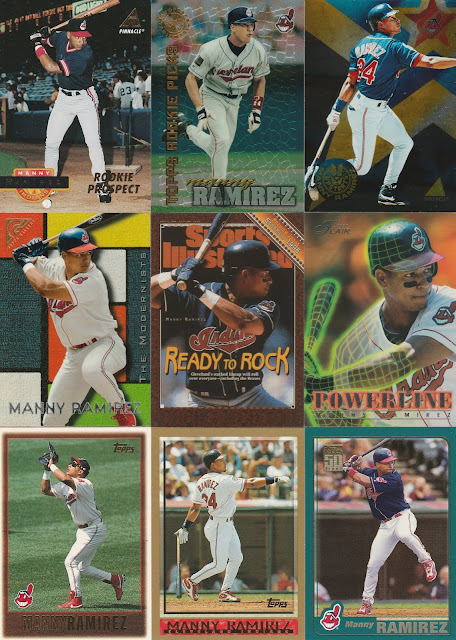 Over his 8 seasons in Cleveland, Ramirez made 4 All-Star teams, and won 3 Silver Slugger awards. He would appear in 10 different post-season series with the team, slugging 13 homers over those games. Even when not hitting, he contributed to his team's offense by scoring runs after drawing walks. While he was never mistaken for an adept fielder in left field, his bat more than made up for his limited range. His Cleveland career included over 1,000 hits and 232 homers with a .313 average. While they did not win a World Series during his time there, the team would not have been the dynasty they became in the 90s without his bat in the middle of the lineup. 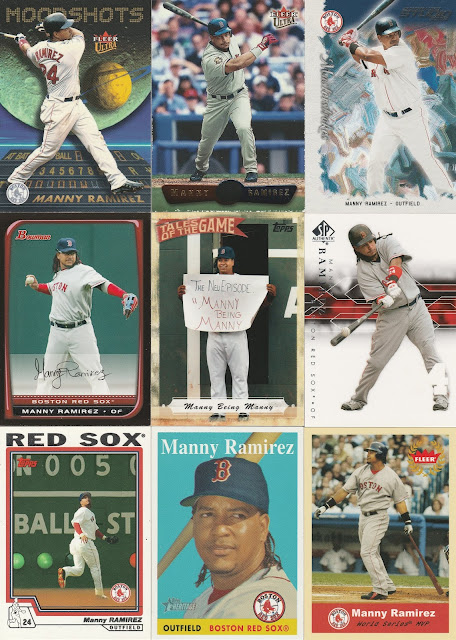 In Boston, the young talent matured into a savvy veteran with very few weaknesses at the plate. During his Red Sox tenure, Manny won a batting title (2002), a home run title (2004), and a World Series MVP award (2004). He was an All-Star in all 8 seasons with Boston, and won 6 Silver Slugger awards. In those 8 seasons, he had over 1200 hits and 274 homers. 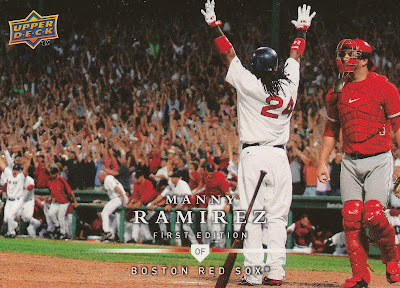 None was celebrated bigger than this one, a walk off winner in game 2 of the 2007 ALDS. 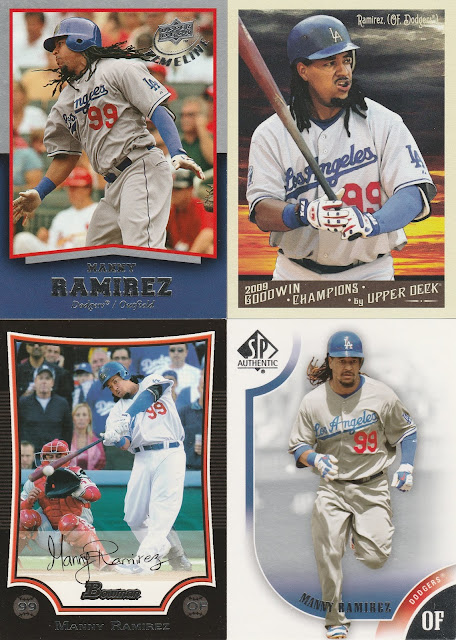 To many, Manny's time in Los Angeles was disappointing. He was not able to lead the Dodgers to a World Series, even though he hit .391 after being acquired by the Dodgers half way through the 2008 season. He would hit .500 in the NLDS against the Cubs, and .533 against the Phillies in the NLCS in a losing effort. The following season he ran afoul of the league's drug testing, and was suspended for 50 games, testing positive for a drug that can be used to mask steroid use. He would still be eligible for post season play, hitting .308 in the NLDS and a homer in the NLCS. He would run into injury issues in 2010, losing his regular role in LF. After being ejected for arguing strike one with an umpire in a pinch hitting appearance, the Dodgers placed Ramirez on waivers. 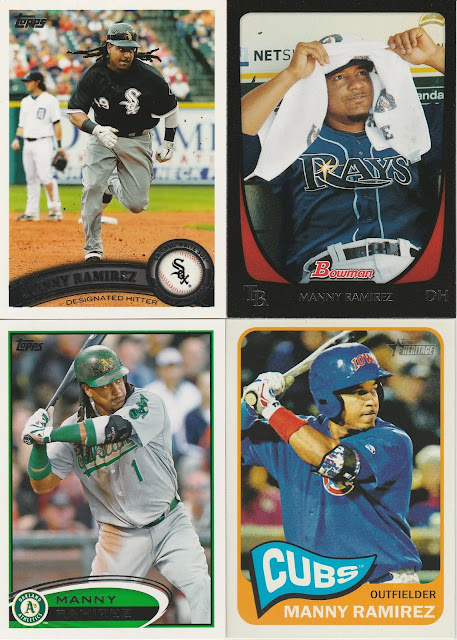 He would finish 2010 with the Chicago White Sox, then signed with Tampa Bay in the off season. He had a strong Spring Training, but struggled early in the 2011 season for the Rays. It was then revealed that he had tested positive for another PED, and Ramirez abruptly retired. He would attempt comebacks in 2012 with Oakland, 2013 with the Rangers, and in 2014 with the Chicago Cubs, but each time he ended the season without a major league at bat. 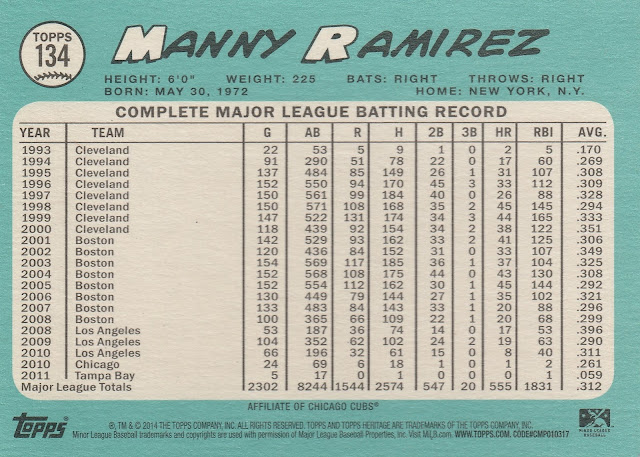 Is Manny a Hall of Famer? He's already in the Hall of Stats and the Hall of Merit - but those 2 failed drug tests seem to have made the decision for the BBWAA writers already. In his 3 years on the ballot so far, he has yet to reach even 25% of the vote.
Posted by Brian at 7:11 PM