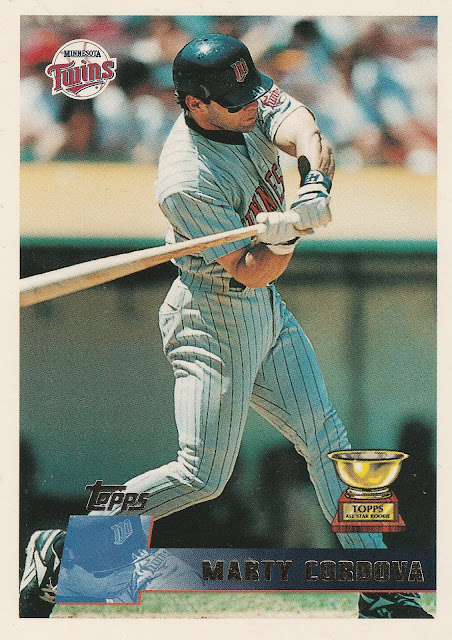 Marty Cordova had a 9 year MLB career following a 6 year minor league climb. By the time Cordova made the major league roster in 1995, he had learned all the right moves to make him successful at the big league level. He was named the 1995 AL Rookie of the Year after hitting a career best 24 homers and stealing 20 bases. 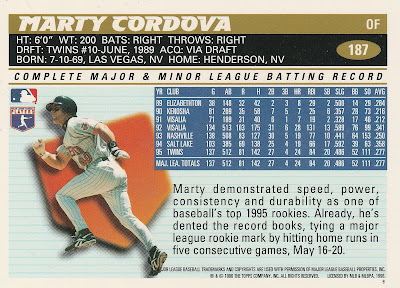 Marty would set a record by hitting a homer in 5 straight games; hitting streaks would be a hallmark throughout his career. Cordova arrived in MN fully grown - debuting at the age of 25. I can vividly recall thinking that Cordova looked like the biggest and baddest dude on the team in those early days.

Cordova was a 10th round selection by the Twins in 1989, the same draft that netted 1991 AL Rookie of the Year Chuck Knoblauch, and Twins ace Scott Erickson. Cordova had already been drafted once before in 1987 by the Padres out of high school, but he opted for school at Orange Coast College in Costa Mesa, CA. Throughout the minor leagues, Cordova flashed considerable power, and shifted from SS to 3B to the outfield. He was the 1992 California League Player of the Year, thanks to 28 homers and 131 RBI to go along with 13 steals. He cleaned up his early defensive struggles as well, making just 2 errors in over 130 minor league games in 1993. Cordova was ranked a top 10 MLB prospect for 3 straight years,  finishing  #4 overall in 1994. 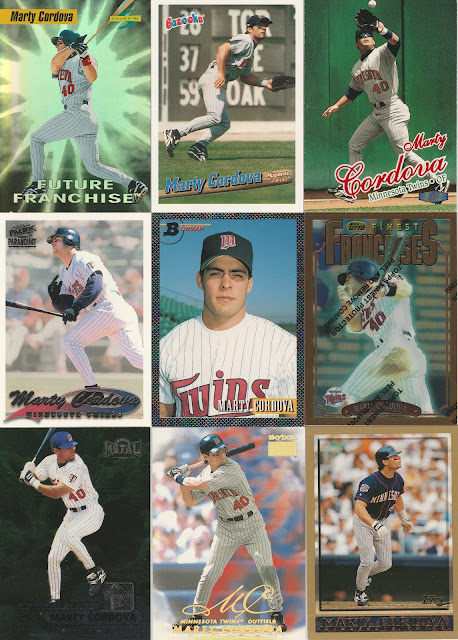 His rookie season was his high water mark for homers, but it could be argued that his 1996 season was even better. He would reach career highs in average, doubles, and RBI that year, filling in as the offensive leader of a team that lost Kirby Puckett to injury and Kent Hrbek to retirement.  Cordova's 23 game hitting streak is still the 4th longest in Twins' history. With Cordova in the outfield and Knoblauch in the infield, the young Twins would show promise throughout the mid to late 90s, but inexperience would be the team's Achilles Heel. Cordova would be hampered by injuries to his back towards the end of his Twins tenure. He would be granted free agency following the 1999 season. 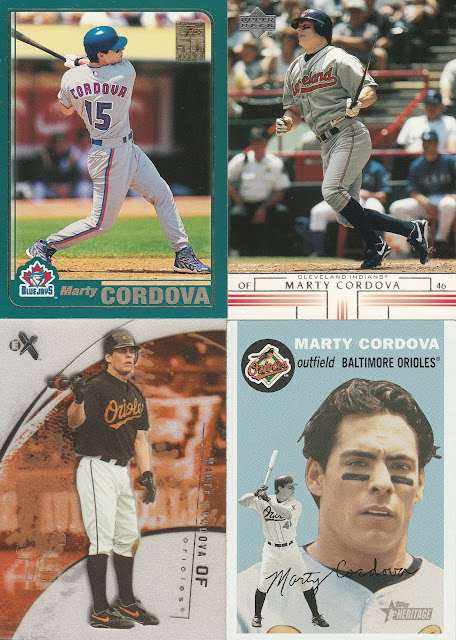 Cordova would sign with Boston in January of 2000, but was let go in Spring Training due to those nagging injuries. He would find a suitor quickly, though, as Toronto swooped in to sign Cordova to a one year deal. He would play in just 62 games for the Jays, hitting a career worst .340 slugging percentage. He was able to have a bounce back season with Cleveland in 2001, topping 20 homers for just the second time in his career. The comeback would earn him a 3 year deal with Baltimore, but he would again struggle with durability, missing the final season of his deal entirely, and playing in just 9 games in 2003. The most notorious injury, of course, was the tanning bed incident, in which Cordova suffered burns on his face when he fell asleep during a tanning session. Cordova would attempt another comeback in 2005 with Tampa, but opted to retire before the end of spring training.

For his career, Cordova drove in over 500 runs in 9 years, despite never hitting 25 homers in a season. His arm in the corner outfield, and his speed early in his career showed the promise of a very talented player.